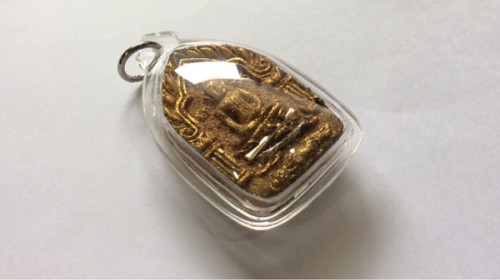 A look at the latest amulets added this 24th of December 2014. Some surprising appearances of older amulets, which we did not expect to be able to put back in stock have reappeared for those who missed them the first time around; Lockets from Luang Phu Nong, Pra Khun Phaen Prai Kumarn from Luang Phu In, Bua Bang Bai Prai Deva Seduction Charms, and a new appearance of Hwaen Dtakror magic rings of protection, from Pra Ajarn Waet Surint. 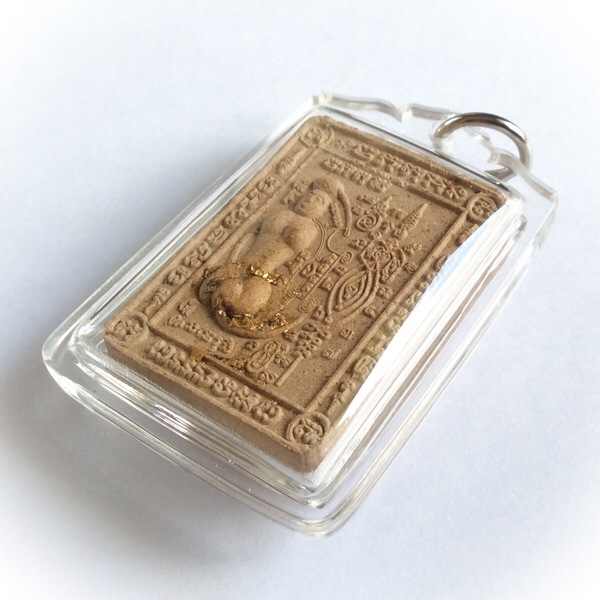 Two kinds of Bua Bang Bai have been added, one from Ajarn Suntorn, and one from Pra Ajarn Num of Wat Bang Waek, also blessed by Ajarn Prakong. 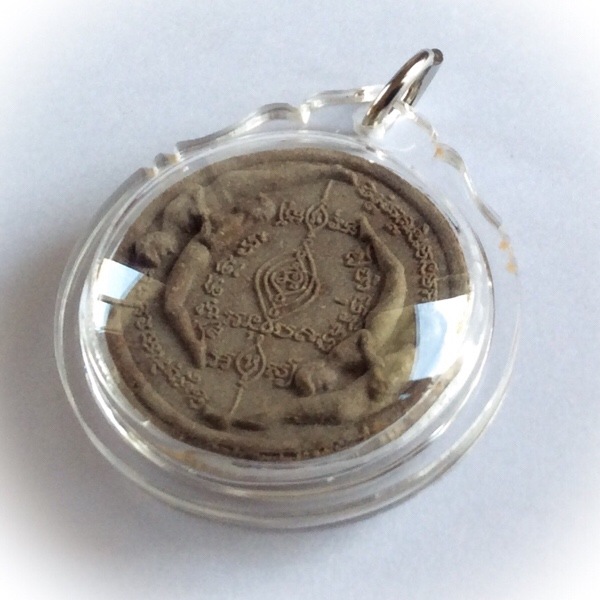 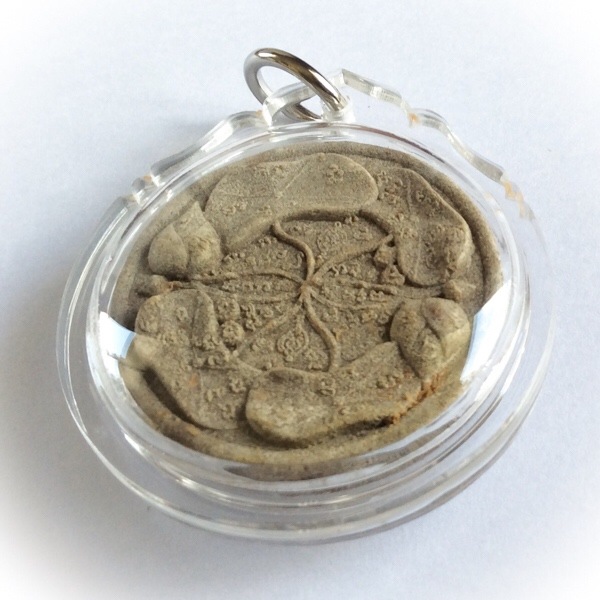 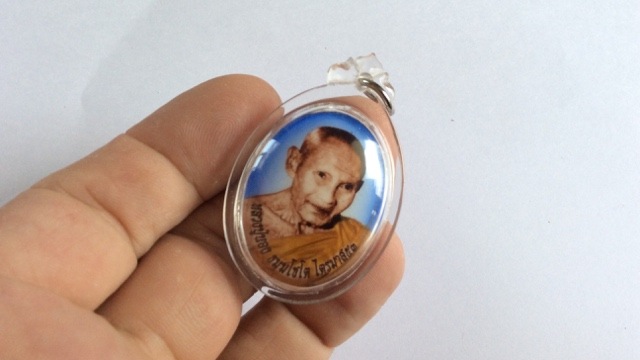 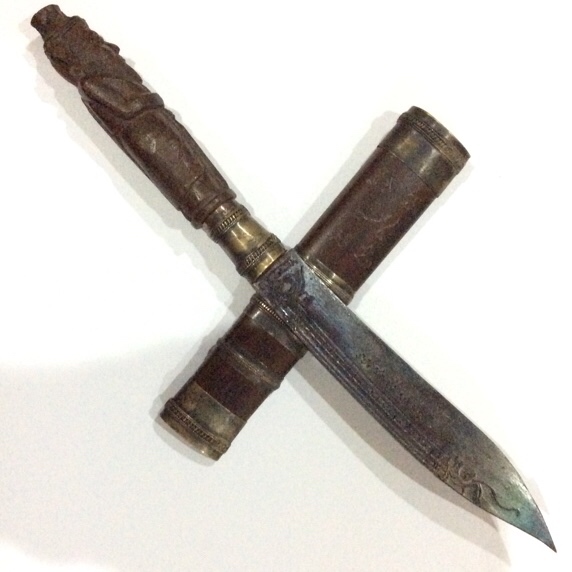 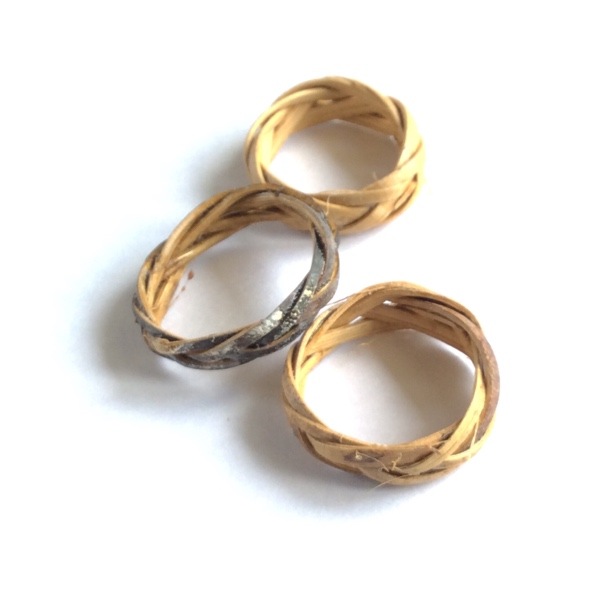 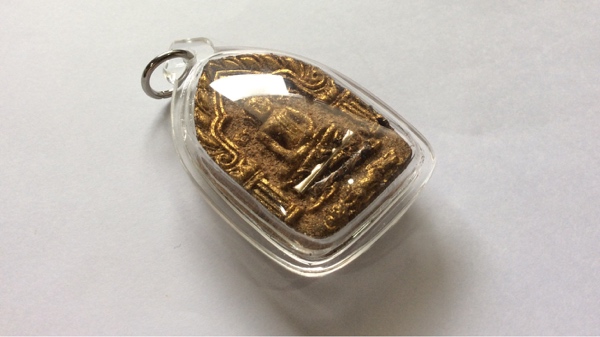 Below you can enjoy a video with narrative from Ajarn Spencer Littlewood. 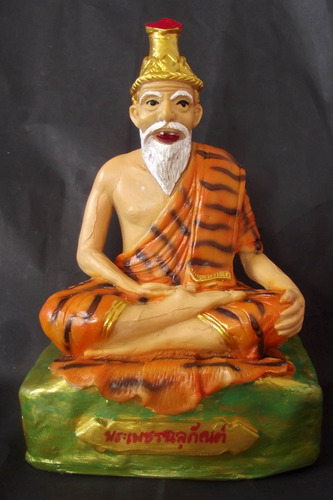 Bucha statue of Pra Ruesi Por Gae Paetchalugan, by Famous Long Standing Lay master and Medium of Ruesi Petchalugan (Ruesi Deva of all Engineers). The Bucha Statue has sacred ‘Pong Aathan’ (magical powders), one ‘Gaew Sarapat Nerk’ wishing crystal and a Por Gae Paetchalugan amulet are inserted into the base for increased power to your Prayers.

Ajarn Supot Ler Cha is one of Thailand’s Longest Standing and Respectable Lay Masters and Spiritual Medium for the Manifestation of Por Phu Ruesi Paetchalukant, as well as an Adept Master of Ceremonies in Brahman and Thai Buddhist Occultist Traditions. His amulets and Ritual Bucha Items are rare, revered and collected by an Elite Group of Devotee, who treasures his amulets like rare pearls, both for their Power, as well as their Rarity and Collectability 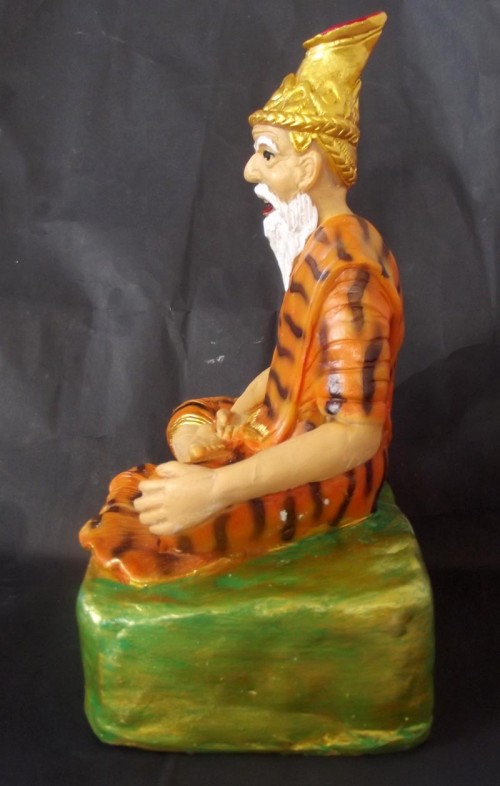 This Bucha statue is for those who revere the Ruesi or practice Ruesi-ism, meditation, Yoga, Massage, Astrology, Ancient scripture, Occultism, or have recieved sak yant tattoos, as well as people from a host of other different professions who revere the Kroo Ruesi Deities. 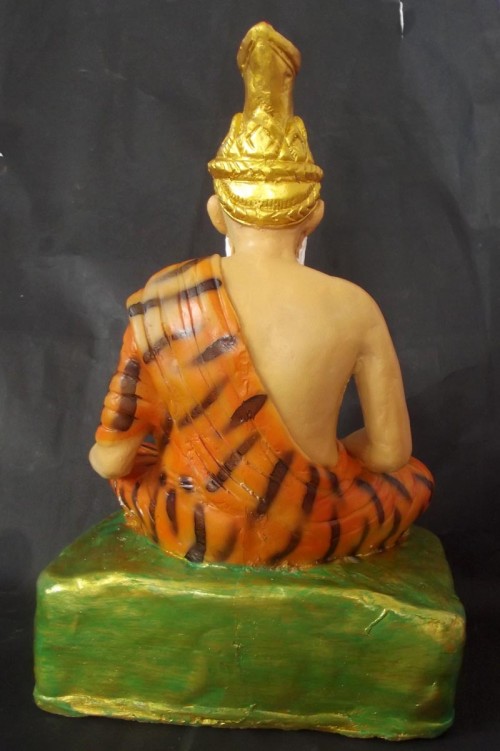 The Statue is made with a Clay Base with sacred powders and a Resin Image.

Worshipping the Ruesi brings a full range of blessings and protective magic of the Boroma Kroo and the Immense Power and Protection of the 108 Ruesi Hermit Sages. 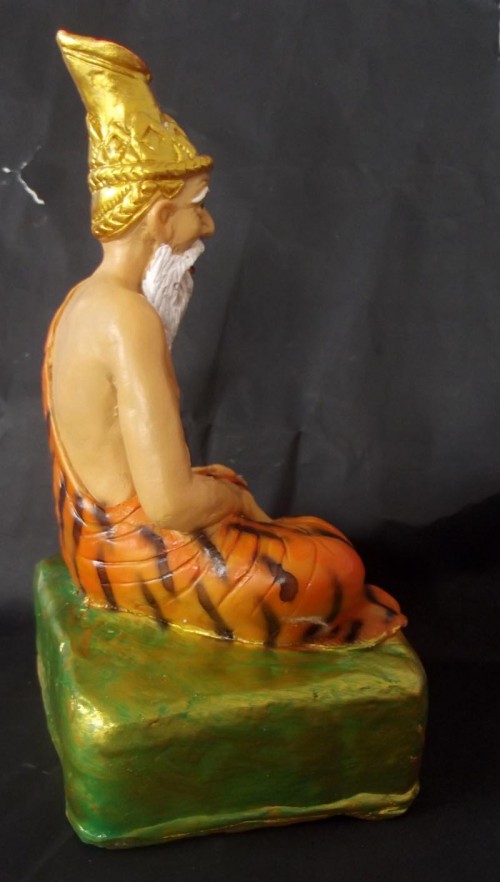 It requires somewhat more effort to practice revering the Ruesi, than to wear an amulet, because the practice of Revering Ruesi is a regular applied practice and you must think that the Ruesi are always with you, and that one lives and behaves as a Looksit of the Ruesi Boroma Kroo Por Gae. It is thus a practice of Bucha which must be kept to and maintained in proper Ritual Manner. the Ruesi Kroo Deities, are essential to have as Bucha Item for those who indeed themself practice Ruesi-Ism, Yoga, Meditation, Herbalism, Minerology, and magical Practices, such as Incantation or Amulet and Talisman making. Meditation practitioners recieve extra blessings from the Ruesi, for Meditation is the primary practice of the Ruesi himself, and those who revere and practice the Science/Arts of Ruesi-ism, will attain great advancements in their meditations by studying and practicing the way of the Ruesi as a way of life. 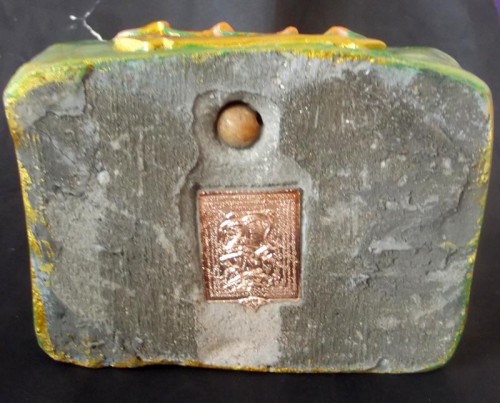 The Ruesi Path is now becoming a very popular alternative to the General Buddhist path, because even a layperson or a married person is able to practice the Ruesi way, and advance within the framework of their own lifestyle. No ordination as Monk is necessary, but a true diligent attitude and effort to practice the Mindfulness path and the path of meditative skill and wisdom is crucial and must be applied. 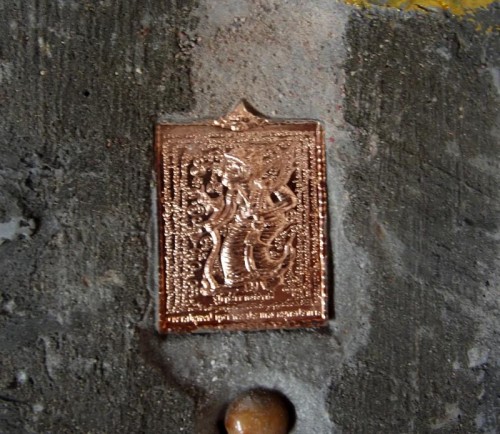 5 types of fruits, a glass of water, 9 Incense sticks

Siarn Phu Ruesi Ta Fai Kroo Deity mask made from Nuea Samrit (Bronze) with sacred powders, 3 Takrut and Tiger Yant – Luang Phu Naen Kampiro. This is the top of the range bronze metallic version of this edition of amulet which was made in five different materials. This Nam Rerk release (first pressing with richest concentration of sacred ingredients), is covered with gold leaf, and hand painted on magical bronze metal alloy, with Ploi Daeng stone in the third eye. Free waterproof casing included.

Phu Ruesi Ta Fai is the Boroma Kroo (Root Guru) of many different walks of life, but is mostly revered by those who are learning the Vedas, Magical Incantation and Empowerments, Meditation, or Kata chants.

He is a protector and Guide to those who revere and pray to him. He is a breinger of Wealth and Prosperity. 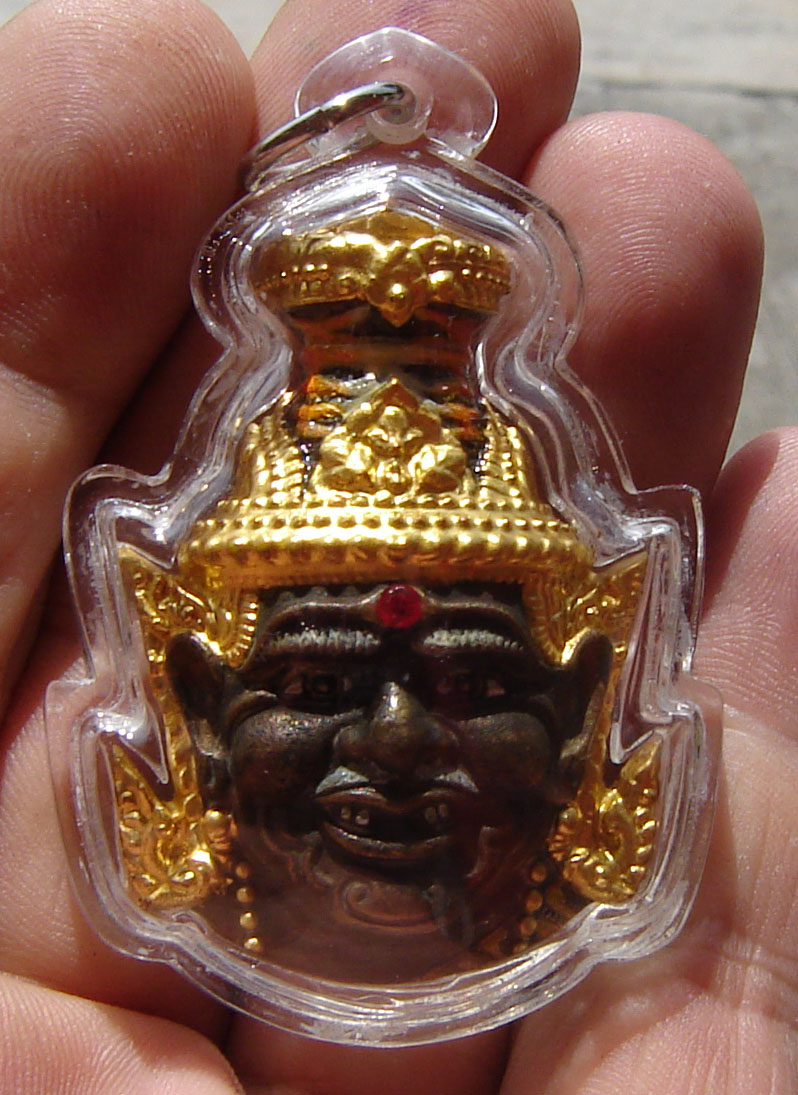 Luang Phu Naen Kampiro, of Wat Ban Kaset Tung Sethee made this amulet from Nuea Loha Aathan (bronze alloy smelted from many ancient magical metals collected for tis purpose). He empowered the content of the amulet with insertion of a Yantra in sacred metal and invoked the Maha Yant Montra Berk Pra according to the Ancient Wicha 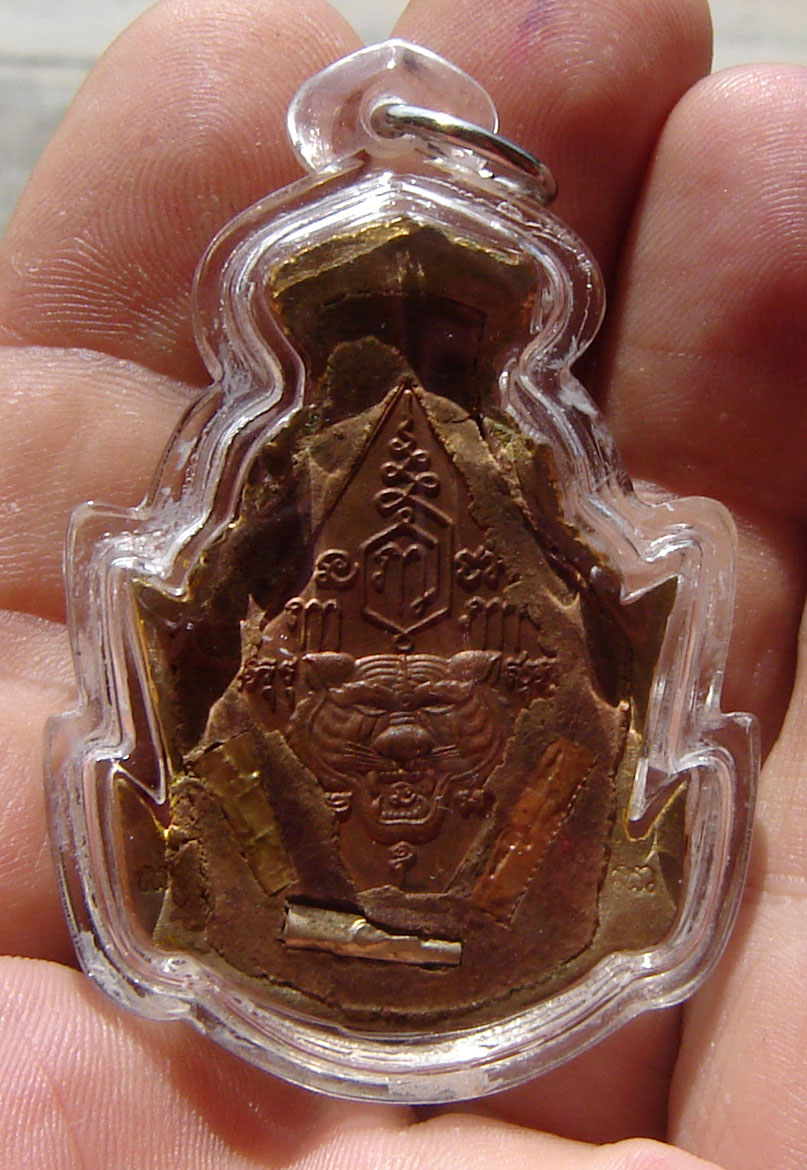 He stuffed the rear with sacred powders made from earth taken from 7 cemeteries, 7 salt licks, 7 ponds and lakes and 7 ports. In additon the powder had ‘Chan Mak’ from LP Naen (chewed betel nut) Maha Wan pollens, powdered Ya Jindamanee, Benjarit powder, and has one ‘Ploi Daeng’ precious stone insert in the third eye on the forehead Takrut Rasi Plaeng Sarn are inserted into the powders.

Hand made amulet in ancient tradition by Ruesi Por Gae Dta Fai (AKA Ajarn Thoy Dabos). Ajarn Thoy is a young Ajarn of the Ruesi lineage, who has incredibly learned many Wicha from various great Ruesi Masters including Khmer Gurus. His magic has now traveled abroad and his sak yant tattoos and magic amulets and charms are becoming ever more famous in surrounding countries such as Singapore, Malaysia and Taiwan. This Khun Phaen amulet is hand pressed for last years Wai Kroo Ruesi Por Gae event, to distribute at the ceremony.

The rear face of the amulet has hand made inscriptions of Khom Agkhara. The Muan Sarn for the sacred powders are made from sacred ingredients that Ajarn Thoy has gathered up over the years, which he mixes and empowers himself by his own hand.

It is rare indeed these days to find hand made amulets that are pressed and designed by the Master who empowers them too, but in Ajarn Thoys case, the ancient type of amulet is still available and changes each year at Wai kroo, when a new line of amulets is released.

The Serm Duang Kong Grapan and Klaew Klaad qualities of Por Gae Ruesi Deity combined with the auspicious and Riches bringing Metta of the Gumarn Tong, this hand made and personally empowered amulet from Ajarn Thoy, is a true hand made sacred amulet using sacred powders and ‘Wan’ (magical herbs) which Ajarn Thoy has learned about and collected over decades to make thes special amulets. It is hard to find ancient hand made traditional amulets in the Modern Era, but Ajarn Thoys amulets are an exception to this rule.

Comes in sachet with picture of Ajarn Thoy.

Free Pha Yant of Gumarn Tong Por Gae from Wai Kroo 2011 Master Day ceremony as a special gift from Ajarn Spencer Littlewood and Ajarn Thoy is included with this amulet.