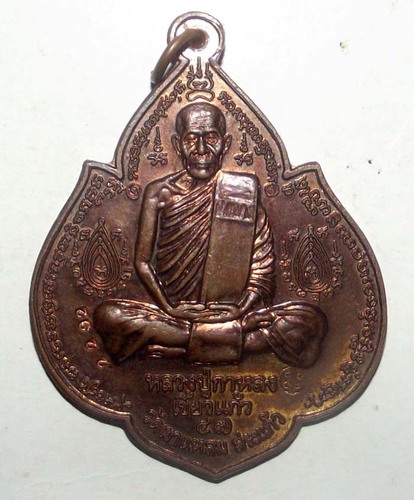 Ultra rare coin from deceased master, Luang Phu Ka Long of Wat Khao Laem, dating back to 2547 BE. All editions after 2549 BE were also immensely collected, but those editions before this date are almost impossible to find.

We are thus happy to have found this example to present for collectors and devotees of Luang Phu, the mysterious monk with the crystal tooth in the roof of his mouth, whose blessings would involve him always touching the crystal to induce power. 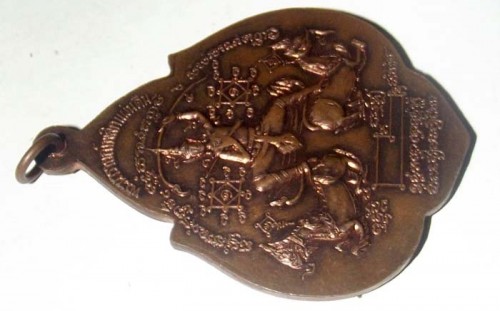 Luang Phu Ka Long is now a legend all over the world, and his amulets are the most collected of all masters of the last decade. A top class collector standard guru monk coin for the serious collector. 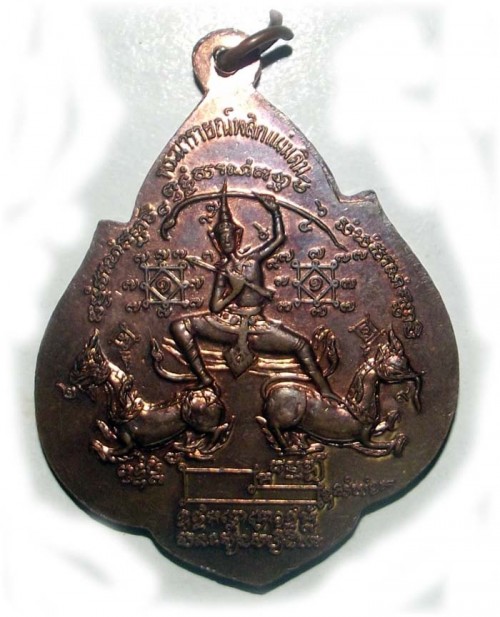 The front face features the image of Luang Phu Ka Long, and the year of issue, with sacred Khom Agkhara inscriptions embossed. 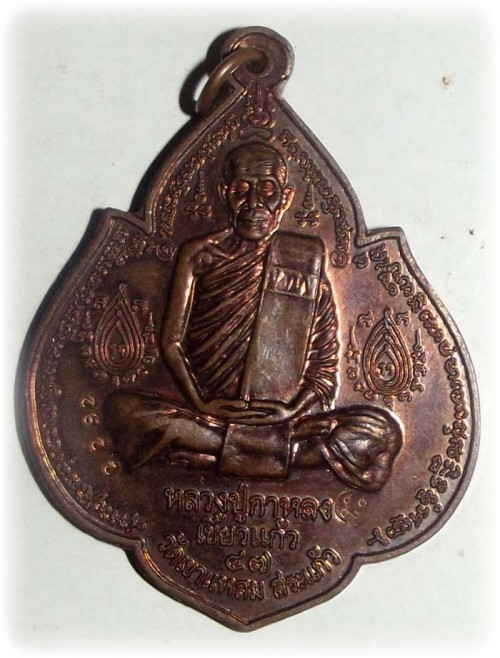 Made from nava loha (9 sacred metals), the amulet is an extreme rarity, and highly valued by devotee and collector alike. 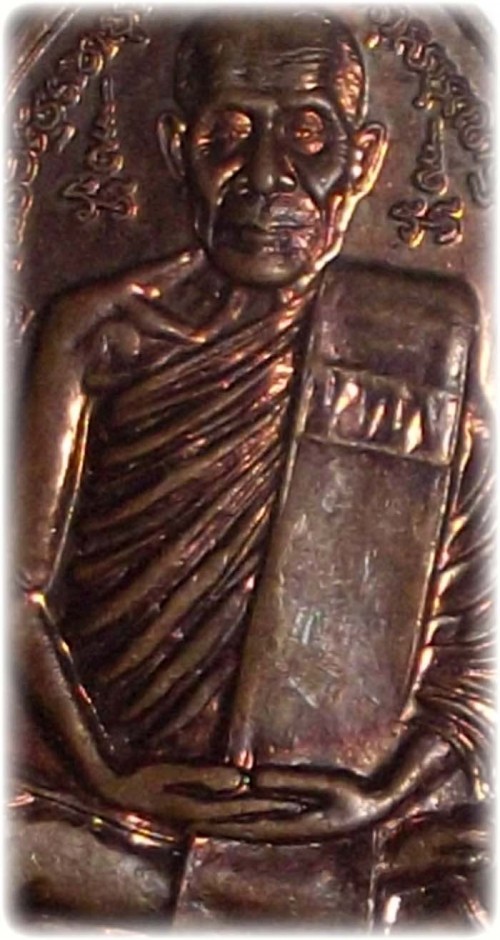 Number of Amulets Made: 999

This edition is the year which brought so many stories of powerful amulets helping devotees, and that such beautiful Buddhist art was applied to the production of his amulets, Pha Yan and other magic charms, that the whole edition was snapped up by devotees and collectors in no time. The 2550 edition Pha yant have become an essential rarity for collectors and devotees of Luang Phu Ka Longs amulets.

Luang Phu met this Deity in his Kuti a he meditated and this began a relationship between Luang Phu Ka Long and Por Phu Ruesi Jao Saming Prai that forged the trajectory of what is one of todays most popular Wicha holders and famous Guru Monks, whose amulets are made with both ancient Wicha as well as finely crafted artistic interpretation. Namely, Luang Phu Ka Long, (Khiaw Gaew).

The Ruesi Por Phu Jao Saming Prai is seated on a rock with a leaping tiger below him. This Yant has the qualities of Serm Duang, Kong Grapan, Choke Lap, Klaew Klaad and Metta Mahaniyom. The Baramee of the Ruesi Devas who practiced austerities to attain their great merits will have an improving effect on everything from business to household and family affairs.

The crystal tooth (called “Khiaw Gaew” in Thai, which is the reason why LP Ka Longs nickname is ‘Khiaw Gaew’), is rather similar to the phenomenon of the Indian Yogi who stayed in a laboratory for ten days and nights without sleeping or eating or drinking water and was completely healthy. That Yogi also has a crystal tooth and even looks like Hanuman, with a white beard and hair.

Luang Phus powerful amulets have been the source of what has been perhaps one of Modern Amulet History’s most popular and widespread followings. Both the magical ability and purity of practice of LP Ka Longs personal trajectory, and the praises and comments about his latent power which many great Masters have made about this inimitable and somehow despite his fame, elusive monk, are complimented with amazing and finely crafted Buddhist works of Art which have been made by LP Ka Longs most artistically educated followers for him to bless and empower with his amazing Wicha.

Korb Siarn Kroo Pra Laks edition Yant shirt (t-shirt) with the Pra Laks Ha Prapaktr Deity (five faced = Ha Prapaktr). Korb Siarn is the ceremony of the laying on of the Kroo Deity mask over the head of the devotee in order to transmit the lineage of protection of the Kroo (Guru) Masters, and to endow the person with certain powers and blessings.

The Yant shirts were Empowered by Luang Phu Ka Long and issued at Korb Siarn Kroo celebration of the Pra Laks Deity. Luang Phu mastered the Wicha of Pralaks magic many lifetimes ago as he once practiced together with the Deity we now know as Por Phu Ruesi Jao Saming Prai, or commonly known as ‘Ruesi Hnaa Suea’ (tiger face Ruesi).

Pralaks is the most powerful Deity for popularity and the traditional Kroo Deity of all performing artists. Pralaks is also useful for merchants and salespersons, as well as for social climbers and professional promotion seekers. Size M (Thai) which allows a smaller male or a woman or teenager to wear, or slimmer person at best below 176 Cm in height.

Riches are an automatic side effect of popularity, and for this reason thew Pralaks Deity is not only considered ‘Maha sanaeh’ (attraction and charm), but is also ‘Choke Lap’ (lucky fortune bringer), throguh the popularity and likeability aspects.

Pra Pirab Statue (Bhairab) with sacred powders , Tagrud, Pra Pirab Ruesi amulet and ‘Tian Chai’ candle inserted in the base. 6 inches wide base and 8.5 inches high. Made from Nuea Samrit (bronze). Pra Pirab is the Kroo Deity of all Dancing arts, and is the bestower of Luck and good Fortune, Happiness, Prosperity and ‘Amnaj’ (commanding power over others). The Amnaj quality if Pra Pirab extends even to ‘Amnaj Maha Sanaeh’, meaning the great power of charm over others. This works both in Love affairs as well as in business or other issues such as politics, to aid in convincing others of your opinions.

Pra Pirab is the Deva of giving or taking life, and has the power to remove any magic spells or dark magical influences. He protects and defends against Phuudt Phii and Bpisaat (ghosts, spirits and demons), and all kinds of evil magics.

Luang Phu Ka Long has a strange crystal tooth in the center of his mouth, which is exactly as described in the legend of Hanuman, who also is reputed to have had a crystal tooth in the roof of his mouth. Whenever he would bless amulets or magical items, he would often put his finger in his mouth and touch the crystal tooth and then take his finger down and rub it on the statue or amulet. He said that some people were born with special things, and that each person was different, and that this crystal tooth was his personal special quality and ability. Luang Phu never advertised himself but somehow from mouth to ear he ended up being flooded with requests for sak yant, amulets and magical assistance. Without intention, he became perhaps the most popular modern amulet makers of the Modern Era.

Luang Phu Ka Long has proved to be the phenomenon of the Decade as far as success with magic amulets is concerned. LP Ka Long amulets and Bucha items have revived immense success in every single edition, each amulet released has become an essential rarity in its own right. Since his passing away, his amulets have become ever rarer and are slowly disappearing. It wont be too long before almost all of them have gone, and only very expensive occasional options to acquire such an item will remain.

This Pra Pirab Bucha statue is the first ever edition made in 2550 BE and is now an extremely rare item to encounter already in the 4 years since it was made. The base has various sacred powders including Pong Pra Pirab (Pra Pirab powder), Tagrud spell, a Pra Pirab Ruesi amulet, and a sacred victory candle from empowerment ceremony.

The immense Magical strength of Pra Pirab will cause any magic spells or other attempts to harm you be reflected back on those who send ill will to you. Those who try to harm you will end up being harmed by their own forceful energy.

Apart from Luang Phu Ka Longs personal fame through his own merits, it is said that once, in his younger days as he was present for a Puttapisek blessing in which the Great Luang Phu To of Wat Pradoo Chimplee (master maker of the Pid Ta LP To amulet) asked after the ceremony who the young skinny monk was over there? It turned out that it was Luang Phu Ka Long, and LP To remarked to the other high monks present; “how can it be such a young monk can have such psychic power in him i have never seen something like this before”?

This Yant design is one of the most Powerful Yantra designs possible. It is also sometimes (rarely) applied as a Sak Yant Tattoo, but only certain people get lucky enough for the Master to agree to lay this image on the devotee. The Master will consider the mental tolerance of the devotee before deciding if it is fitting or safe enough to apply this Deity onto their skin.

People involved in professions that are punishing evil will do well to have Pra Narai guiding them and watching over, because Pra Narai helps the Human Race, and also is the Punisher and puts all wrongs back to right.

He always comes down to Avatar and to bring Justice whenever Evil walks the Earth. He is a Deity that will bring all qualities of blessings ranging from riches (choke laap) through protection (klaew klaad and kong grapan) up to charm and sales (Maha Sanaeh and Metta Mahaniyom power). The Yant were made in 2550 BE. They have official stamp of the temple and numbered edition code. High quality cloth is used as is always the case with amulets and Wattumongkol from LP Ka Long.