Categories: All Posts
Comments Off on Thai Amulets Added in April & Some News about Safe Sak Yant

Presenting an easy to sit back, relax and watch slideshow of the amulets added to Thailand Amulets, Buddhist Amulet, and Ancient Amulet Stores in the Month of April.

Please enjoy this long slideshow presenting you with a general overview of the latest amulets we have added to all three online amulet stores, without having to visit all three stores to browse. You can see which store which amulet was added to easily because each picture has the url of the store it was added to watermarked on it, as each image comes up throughout the slideshow.

If any amulet interests you, you can then go to whichever of the three websites it is in, to view it and read up about it

We hope you enjoy the slideshow. The Music for this slideshow was composed and played by Thailand-Amulets Proprietor, Ajarn Spencer Littlewood, Music Making being one of his personal hobbies, which he does to relax from his hard work authoring and publishing info on Buddha Magic, Sak Yant Thai Temple Tattoos, and Thai Amulets.

On the subject of Ajarn Spencer Littlewood and Tattoos, we can also update some news that Ajarn Spencer Littlewood has now opened a Modern Hygienic Tattoo Studio and Tattoo School in Pattaya district, and is installing his Sak Yant Foundation Museum of Sacred Yant, and is now planning to install a small area for Bucha to Por Gae Lersi Dta Fai and Sak Yant, for performing Sak Yant.

Ajarn Spencer – Pics from the Past

He will then be receiving people who wish to visit and receive information or just chat about the subject of Sak Yant Thai Temple Tattoos, Buddha Magic, the Lersi, and in certain circumstances, perhaps also receive a Sak Yant Tattoo. Ajarn Spencer uses Modern State of the Art Autoclave Sterilisation, and Ultrasonic Cleaning Instruments from the Modern tattoo Studio at Pattaya Tattoos, to ensure Safe Hygienic Traditional Sak Yant Tattooing (and modern tattooing), which can be applied by hand method or machine method, and ensures complete prevention ofd cross contamination, for Safe Health and Hygiene. 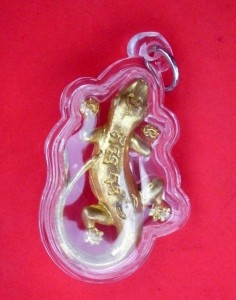 Click Here to view the amulet in the store >>>

Made using the Dtamra Luang Phu Hnay (Wat Ban Jaeng) – Sak Yant Grand Master of the foregoing Generation, and a Kroo Ba Ajarn of Ajarn Bpum. Luang Phu Hnay was famous for his Gecko amulets and sak yant tattoos (as is Ajarn Bpum too, his antecessor). Waterproof casing included in the price 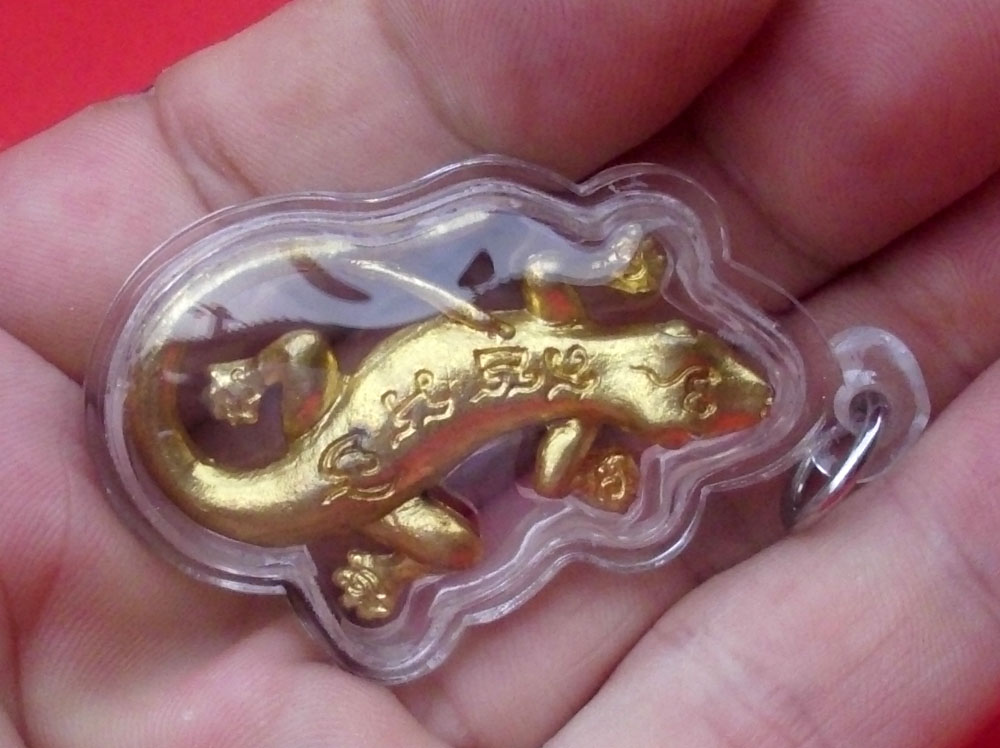 The Geckos were made from Sacred Chanuan Muan Sarn (sacred metals and substances). Sacred metal Yant foils were made to smelt into the Geckos; Yant Choke Laap Kaa Khaay, Yant Sariga Lin Tong and other Yant for Metta Mahaniyom and Maha Sanaeh. The Jing Jok is a powerful attraction agent for love andd social climbing, and also one of the best amulets for merchants and shopkeepers. 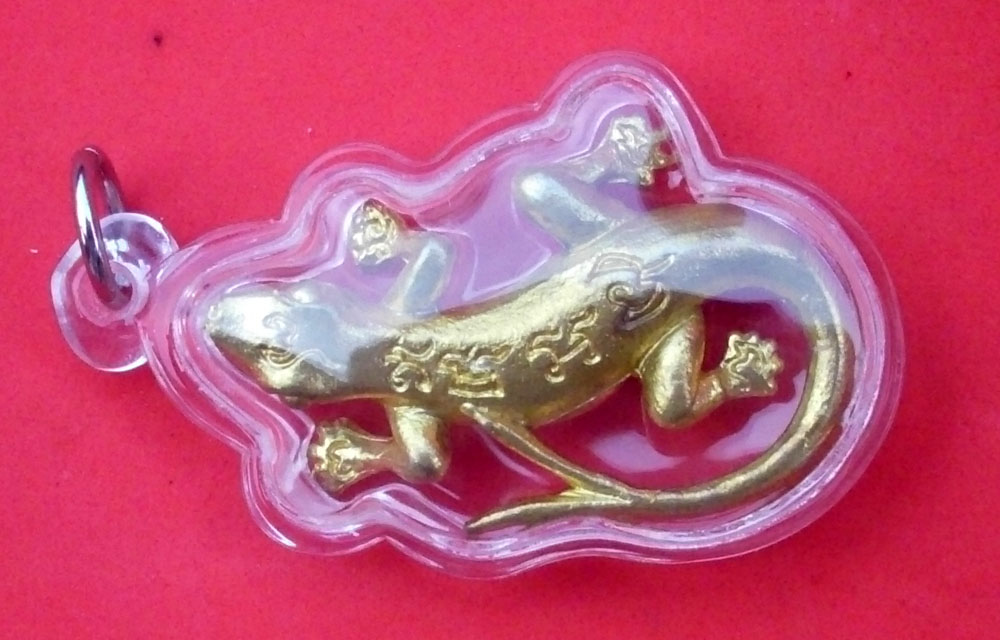 Popular with Ladies, Salesmen and even stock market speculators. Increases powers of attraction for love and business, aids in getting promotion and improves your oratory skills in influencing others. 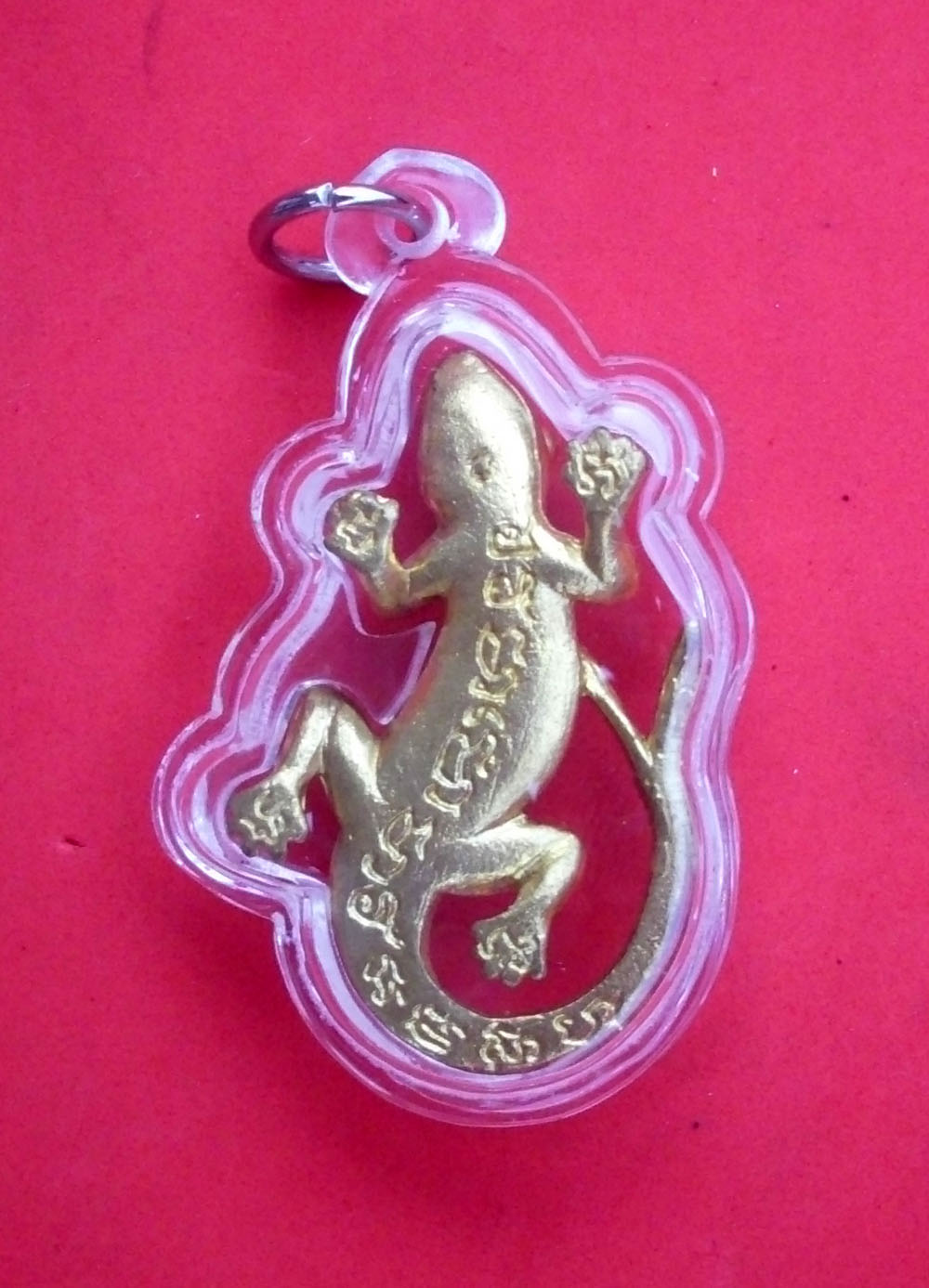 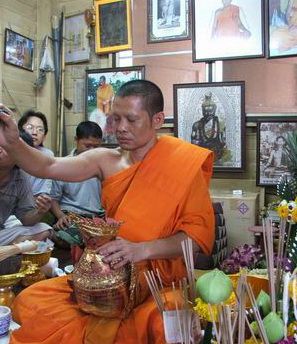 View all of our Gecko amulets in the below section

This edition is the year which brought so many stories of powerful amulets helping devotees, and that such beautiful Buddhist art was applied to the production of his amulets, Pha Yan and other magic charms, that the whole edition was snapped up by devotees and collectors in no time. The 2550 edition Pha yant have become an essential rarity for collectors and devotees of Luang Phu Ka Longs amulets.

Luang Phu met this Deity in his Kuti a he meditated and this began a relationship between Luang Phu Ka Long and Por Phu Ruesi Jao Saming Prai that forged the trajectory of what is one of todays most popular Wicha holders and famous Guru Monks, whose amulets are made with both ancient Wicha as well as finely crafted artistic interpretation. Namely, Luang Phu Ka Long, (Khiaw Gaew).

The Ruesi Por Phu Jao Saming Prai is seated on a rock with a leaping tiger below him. This Yant has the qualities of Serm Duang, Kong Grapan, Choke Lap, Klaew Klaad and Metta Mahaniyom. The Baramee of the Ruesi Devas who practiced austerities to attain their great merits will have an improving effect on everything from business to household and family affairs.

The crystal tooth (called “Khiaw Gaew” in Thai, which is the reason why LP Ka Longs nickname is ‘Khiaw Gaew’), is rather similar to the phenomenon of the Indian Yogi who stayed in a laboratory for ten days and nights without sleeping or eating or drinking water and was completely healthy. That Yogi also has a crystal tooth and even looks like Hanuman, with a white beard and hair.

Luang Phus powerful amulets have been the source of what has been perhaps one of Modern Amulet History’s most popular and widespread followings. Both the magical ability and purity of practice of LP Ka Longs personal trajectory, and the praises and comments about his latent power which many great Masters have made about this inimitable and somehow despite his fame, elusive monk, are complimented with amazing and finely crafted Buddhist works of Art which have been made by LP Ka Longs most artistically educated followers for him to bless and empower with his amazing Wicha.

Korb Siarn Kroo Pra Laks edition Yant shirt (t-shirt) with the Pra Laks Ha Prapaktr Deity (five faced = Ha Prapaktr). Korb Siarn is the ceremony of the laying on of the Kroo Deity mask over the head of the devotee in order to transmit the lineage of protection of the Kroo (Guru) Masters, and to endow the person with certain powers and blessings.

The Yant shirts were Empowered by Luang Phu Ka Long and issued at Korb Siarn Kroo celebration of the Pra Laks Deity. Luang Phu mastered the Wicha of Pralaks magic many lifetimes ago as he once practiced together with the Deity we now know as Por Phu Ruesi Jao Saming Prai, or commonly known as ‘Ruesi Hnaa Suea’ (tiger face Ruesi).

Pralaks is the most powerful Deity for popularity and the traditional Kroo Deity of all performing artists. Pralaks is also useful for merchants and salespersons, as well as for social climbers and professional promotion seekers. Size M (Thai) which allows a smaller male or a woman or teenager to wear, or slimmer person at best below 176 Cm in height.

Riches are an automatic side effect of popularity, and for this reason thew Pralaks Deity is not only considered ‘Maha sanaeh’ (attraction and charm), but is also ‘Choke Lap’ (lucky fortune bringer), throguh the popularity and likeability aspects.

The Gumarn has been made according to the Wicha of the Samnak and has sacred powders, Takrut and a Gumarn effigy inserted into the base of the statue.

Ajarn San Kong Waet – Brahman Sak yant Master of Ang Tong District. He learned his Wicha from his Grandfather, who was a learned Adept in Saiyasart who had inherited Wicha from Luang Por Tuad himself. His teacher was a Sak Yant Master too, which is one of the Wicha which Ajarn San has inherited from his Grandfather. He also recieved Wicha from studies under Luang Phu Hnay of Wat Ban Jaeng in Ayuttaya, and Khmer Master Ajarn Bun, Luang Por Yib (Wat ban Klang). He was given the Wicha from Luang Phu Tammachote of Wat Kaay Ban Rajan Po Gai Dton and Wicha from the lineage of Phu Suea Mahesworn (a famous Outlaw of the second world war times that is now a famous and respected Guru Monk).

3 inches wide base and 5 inches high Takrut, sacred Gumarn powder and white robe from Ajarn San is inserted into the base of the Gumarn.