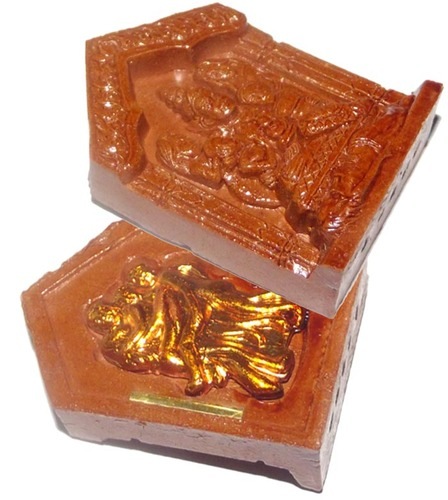 Pra Khun Phaen Taw Paya Pan Mia (‘Khun Phaen Lord of a Thousand Wives’) – Wicha Ba–Cha–Dta; love, business, gambling and mercy charm from Luang Por Goy of Wat Khao Din Dtai, Buriram. The khun phaen uses the wicha ‘Ba-Cha-Dta’, and the power of prai kumarn powders to empower a classic amulet in a classic edition that is into its third ever edition.

This is the final edition ever of Luang Por Goy’s now 3 time world famous kumarn ‘Gao Gote’ amulets, using the sacred prai powders and ashes of nine kumarn and kumaree. This edition is even more highly awaited and fast in depletion than the previous editions, due to the fact that it is the last ever edition which will be made using this muan sarn sacred powder, which is now completely depleted and no more available for further amulets to be made. 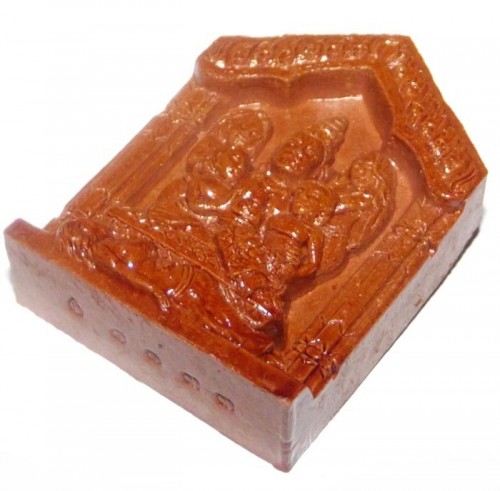 These khun phaen ‘Ba Cha Dta’, is indeed a khun phaen ‘Prai Kumarn’ too, for the nine kumarn powders used in its muan sarn, along with the immense maha sanaeh power of herbal muan sarn, and rich in metta and prai oils. 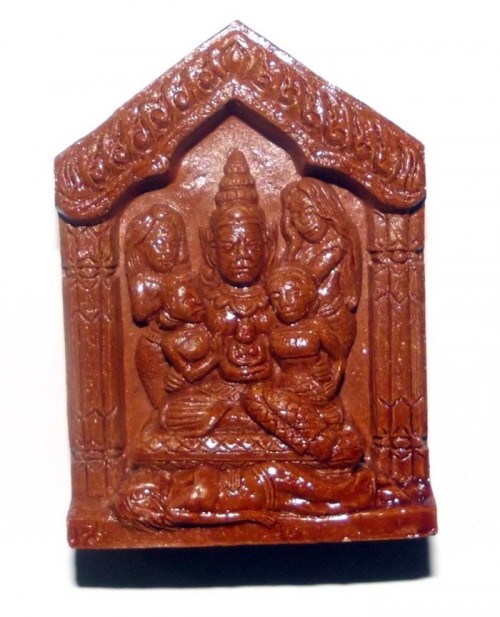 The front face of the amulet features khun phaen surrounded by his many wives, with his kumarn child on his lap. They all embrace in harmony with love and happiness, and khun phaen is wealthy and prosperous enough to feed his large family.

Luang Por Goy’s powerful sacred powder is visibly his, and recongnizable as that used in the previous editions. This is truly a sign of constancy and true wicha to see the muan sarn of the amulets emerge with such similarity in consistency, aroma and texture, that the composition is rigidly adherent to the strict magical formulas of ancient Khmer necromantic sorcery. 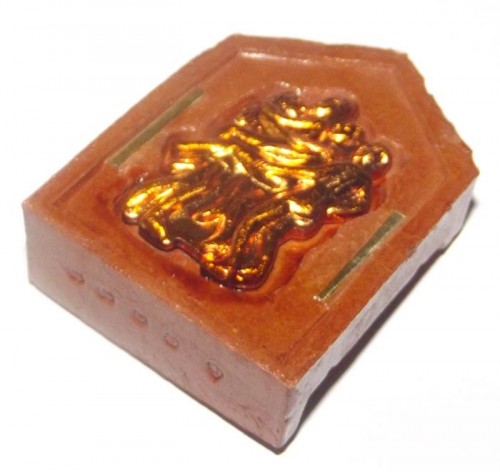 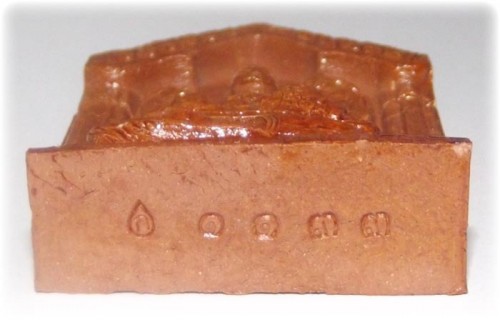 The base of each amulet has the edition code and limited number code stamped into them.

Khun phaen ‘Taw Paya Pan Mia’ is the product of the decades of experience of khun phaen empowerment using ‘Ba Cha Dta’ wicha, that has left Luang Por Goy at the pinnacle of his magical trajectory, and is now at its most powerful. This wicha ‘Taw Paya Pan Mia’ is born of the experience made from the making of Luang Por Goy’s famous khun phaen ‘Nang Rum Rak Ba Cha Dta’ amulets, which was the most powerful and famous khun phaen of its era, that produced so many success stories and satisfied so many devotees in their expectations. The amulets of Luang Por Goy, especially his khun phaen, are of high repute for attracting lovers and for good commerce.

Because so many devotees begged always for a new edition, Luang Por Goy accepted the challenge to make an even more powerful ‘Ba Cha Dta’ type khun phaen using all of his experience to date, and using his most powerful muan sarn sacred ingredients for their composition.

In addition to the now famously coveted kumarn ‘Gao Gote’ powders used in the muan sarn, the following sacred herbs and other ingredients were also included in the formula:

Pong Ga Fak Rak Sorn Dtaay Prai; Powdered ‘Ga Fak’ entwined with ‘Rak Sorn’ flower tree that died as a prai tree. Rak Sorn is a powerful maha sanaeh herb, and Ga Fak Rak is a love charm wood, the two of which, sometimes entwine together and exists as a symbiotic creature supporting each other, just like the ‘Ba-Cha-Dta’ and In Koo prai devas.

Pong Wan Kruea Thao Hlong ; A rare forest vine that entwines lovingly and loses its way in a very entangled manner throughout the branches and leaves of the tree; known for its power to enchant and cause to fall helplessly in love, lost on the path, fallen by the wayside, like an enchanted traveller who falls into a fairy circle.

Pong Wan Nang Ok Dtaek; A sacred powder made from prai powders and herbal extract of the ‘Wan Nang Ok Dtaek’ plant. Nang ok dtaek means ‘broken hearted lady’, and is known for its power to convince and enchant even the most obstinate and unwilling of people, to fall for one’s charm, and eventually fall in love.

Pong Taep Ramjuan; ‘Dancing deva powders’ – pure enchantment for courtship, using the invocations of the dancing deva and the powders of the ‘Wan Taep Ramjuan’ herb, to incite excitement and loosen the fetters of shyness in the target when charming them into your heart.

Pong Gaesorn Dork Mai Tong; The pollens of the rare and sacred golden flower herb, that renders only one single golden flower per year, and is believed to be perhaps the most powerful maha sanaeh herb of all.

Pong Wan Khun Phaen; The ‘Khun Phaen herb’, that is so well known for its power to increase status and attract business and commerce, and charm both the same and the opposite sex into agreement.

All the muan sarn was ground together into one substance and given the invocations to transform it into the ‘Ba Cha Dta’ wicha powders, and then they were pressed into the form of the khun phaen ‘Taw Paya Pan Mia’ amulets. The amulets were made in different models (pim), with different grades. Pim B has 2 silver takrut inserts, and pim A ‘Ongk Kroo’ has 9 silver takrut inserts.

The rear face has an in koo ‘Piswaas Prai’ deva inserted which was smelted and cast from sacred yantra foils. The yantra foils contained amongst others, the following yantra:

Luang Por Goy empowered his jhanic forces into the amulets using his best metta mahaniyom, maha sanaeh and maha piswaas magic to give the final edge to the amulets and lend them the extra power to assert their magic over any obstacles. 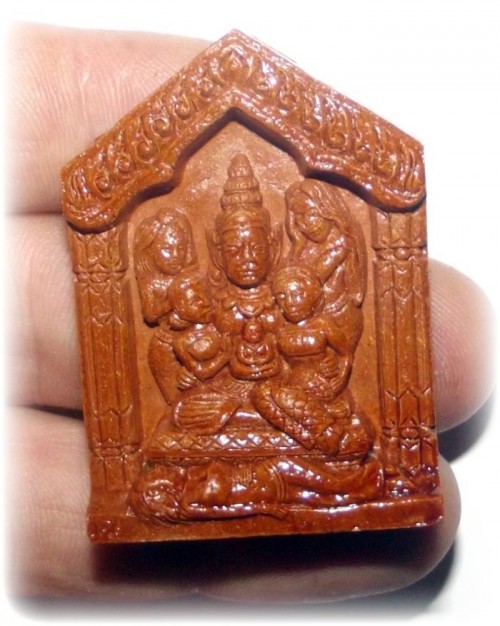 Useful sorcery for everything from charming your mate in life, to gambling, receiving mercy from superiors or in legal affairs, stop backstabbers by converting their hate into compassion, enchant others with convincing charming speech, and to increase popularity and promote professional and social status with the mercy charm within the amulets as an aid to smooth out the wrinkles in one’s life. 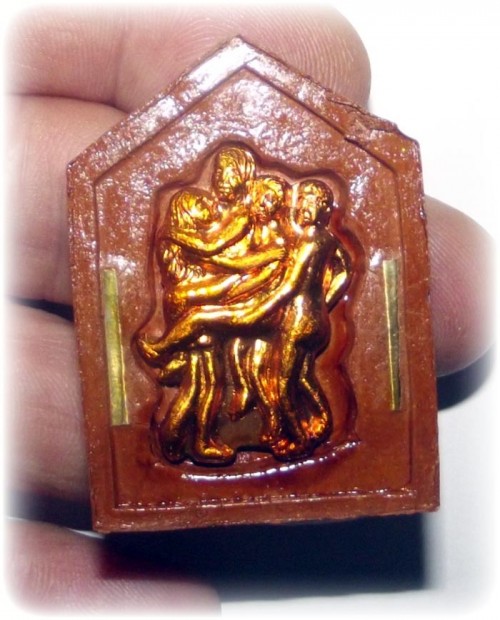 Luang Por empowered the amulets until he saw a nimitta of the khun phaen deva, and then took the amulets to immerse them in nam man prai ‘Tae Krua Naree Rampheung’, for the ‘traimas’ period (rainy trimester). 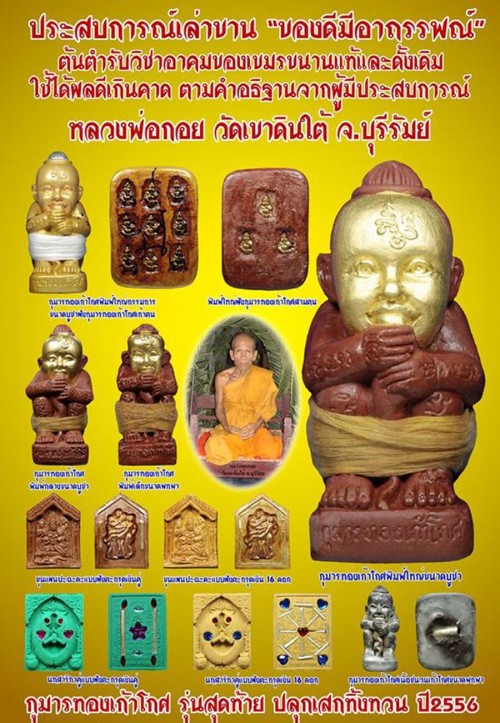 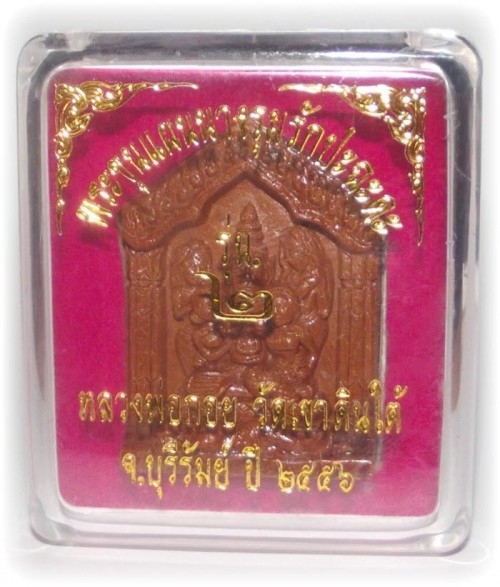