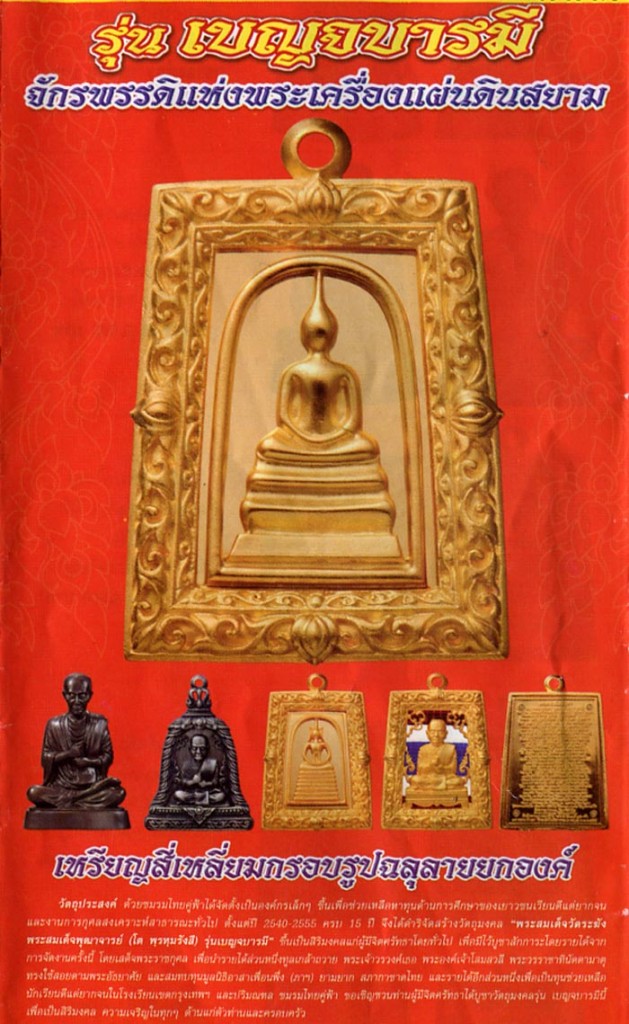 Welcome back to Thailand Amulets blog – After a week or two of silence on the Thailand-Amulets.Net Blog Section we are happy to announce our return, after moving the store to a more efficient Hosting Company and faster server. It has taken us two weeks to finalize the transfer and we are now safely in the hands of our new hosting company, which offers a much more efficient server. A revamp of the navigation design and the site banner has also been made.

So now we can safely begin to post new articles and info pages again, and will soon be adding the latest additions upcoming to the store. As a small taster, here are some previews of the latest editions of amulets which are about to be added to the store in the coming 2 weeks.
Amongst the Most Attractive and Interesting of the Upcoming Releases of Thai Buddhist Amulets about to arrive in the store, are the Benja Baramee Edition of amulets from Wat Rakang/Wat Gaes Chaiyo – ‘Rian See Liam Grorp Roop Chalu Lay Yok Ongk’ Sacred Metal amulets from Wat Rakang, and Wat Gaes Chaiyo Temple. The series is a large range of Pra Somdej Dto Prohmrangsri Images, in rectangular or bell shaped frames, Pra Somdej Wat Rakang and Pra Somdej Wat Gaes Chaiyo amulets. All the coins were made in a vast number of different combinations of sacred and/or precious metals, with most elegant and finely honed decorative frames. In addition, some large 9 inch base Statues of Somdej Pra Puttajarn (Dto) Prohmrangsri were released and some Pha Yant (Yantra Cloths), with a special Benjapakee set of amulets in box set being an eye-catching addition to the series. 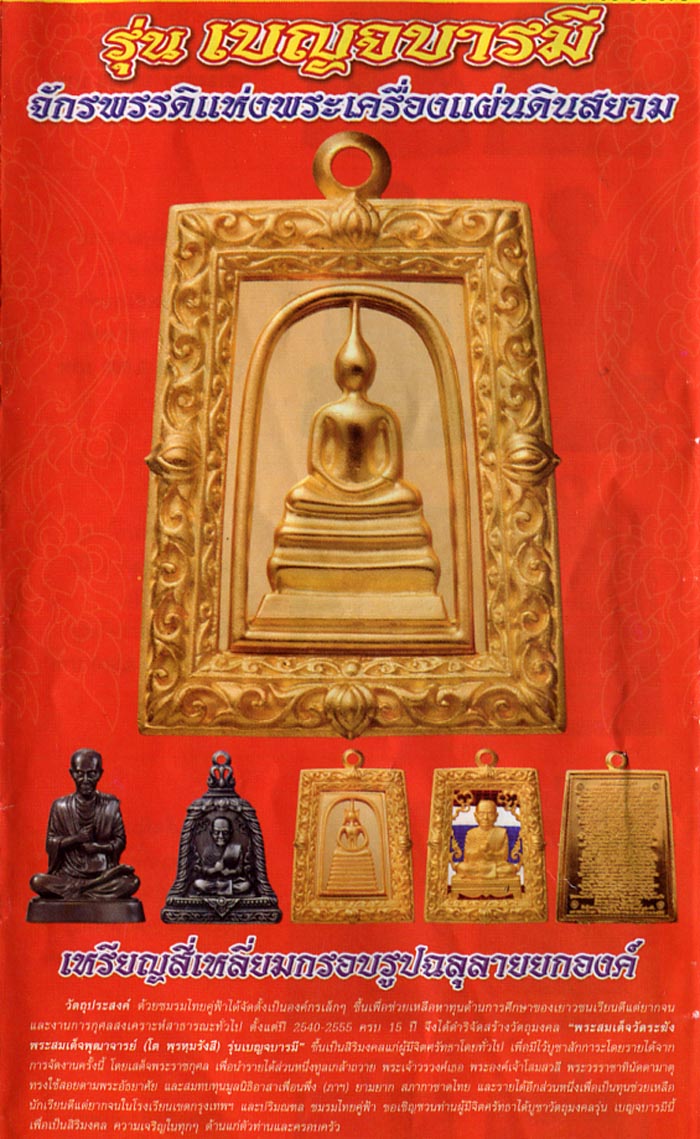 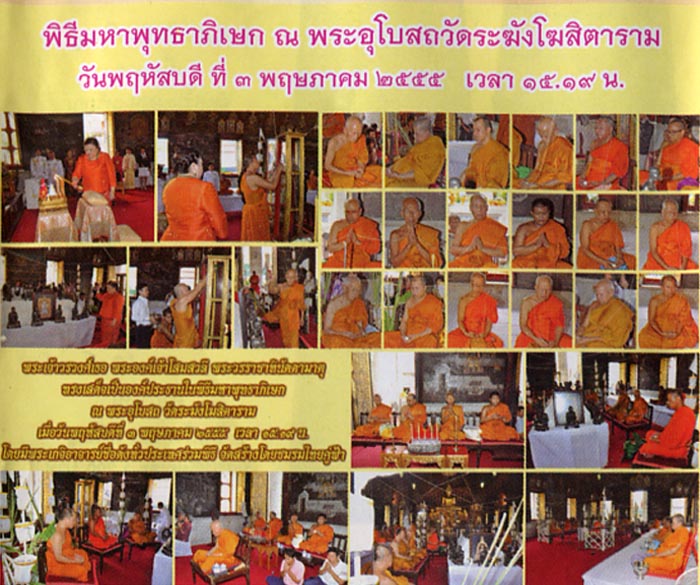 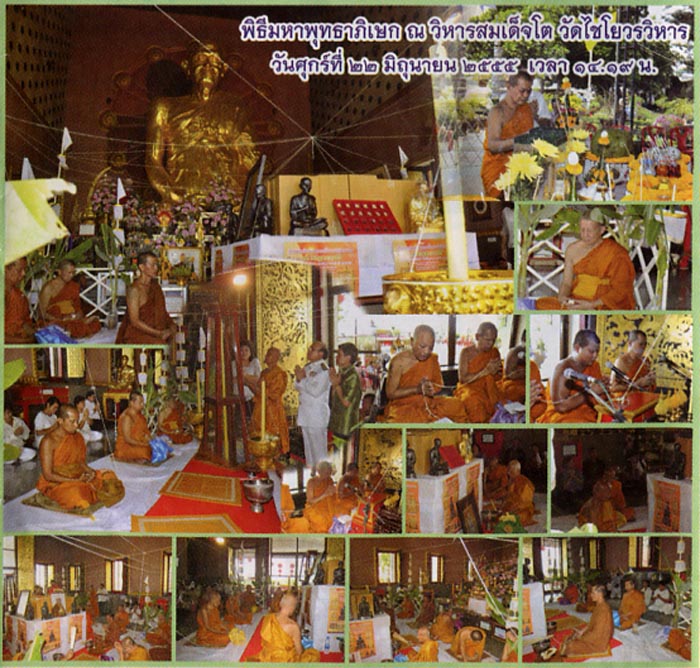 Above Pic; Second Blessing Ceremony of the Run Benja Baramee 2555 BE Edition Amulets at  at Wat Gaes Chaiyo

Most interesting for me of this series, are the nine inch gold leaf covered bronze statues of Somdej Dto Prohmrangsri, of which only 50 or more were made and are certain to become classic rarities, whose value will quintuple in a very short time indeed in my opinion, but whatever the value will always be a difficult thing to let go of, because it is a most excellent Bucha statue for the altar for personal practice. Money can be found anywhere, but an item like this can not. 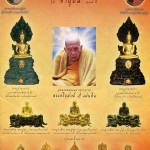 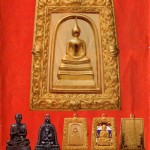 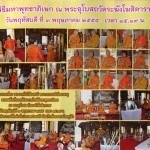 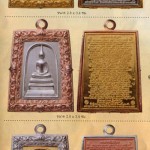 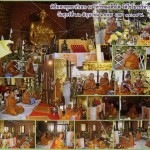 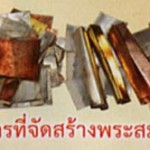 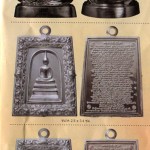 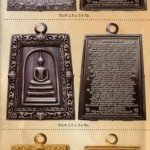 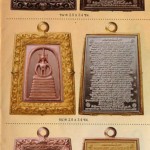 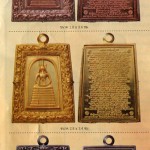 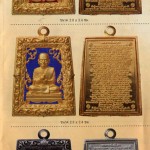 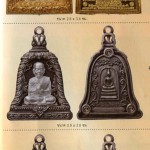 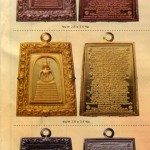 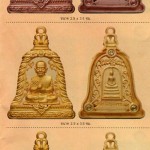 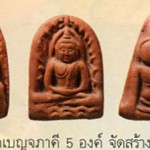 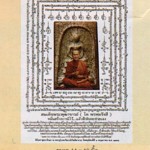 The next interesting series of Sacred Buddhist Amulets and Bucha Statues is the Exquisitely Beautiful edition of  Thai-Chinese Taw Waes Suwan Statues, Coins and Amulets from Wat Plab Pela, which has been awaited with great Anticipation. Considered to be the most important release of Taw Waes Suwan amulets in Decades, and destined to become a classic Thai Buddhist Amulet of Connoisseur Status. a total of 96 Guru Masters attended the massive Putta Pisek and Tewa Pisek Empowerment Ceremony in a Large ceremony of National  and Historic Importance. 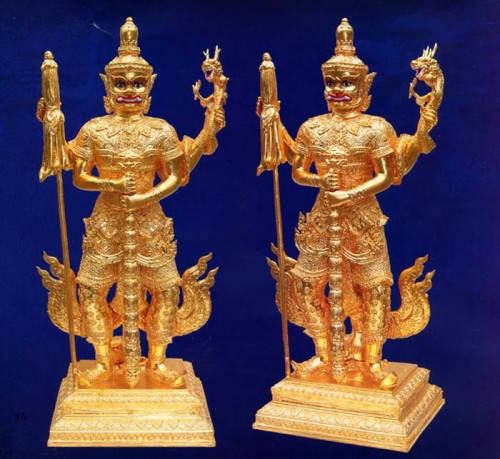 Taw Waes Suwan statues are fashioned into a special 3 legged posture holding a dragon. The third leg is standing on a treasure chest holding it safe from thievery, and the dragon prevents floods and Tsunamis and natural disasters from occurring and causing havoc to the economy of the household, and indeed, your Nation. 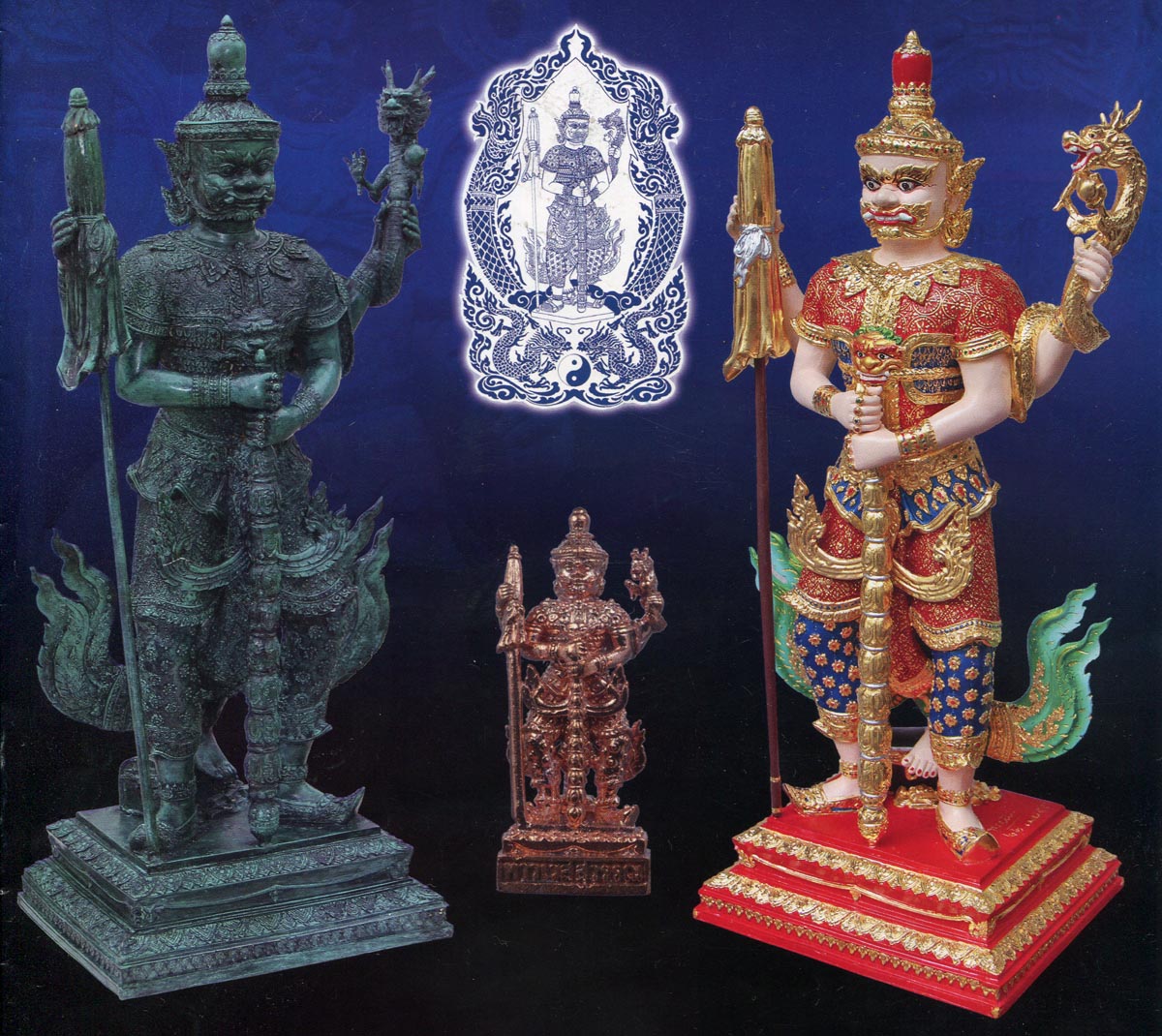 Specially designed and empowered using a complex set of Wicha which have been gathered and applied in order to protect Human Beings and the Nation, from Natural and Economic Disaster, to acquire more Wealth and to Keep what Wealth that has been Gathered already from slipping away and disappearing. This editions is chosen specially by Me (Thailand-Amulets.Net’s owner Ajarn Spencer), for i have studied and selected this edition as a very recommendable choice for the customers of the store.

Two versions of coin amulets were made, with a special two sided two posture version being the collectors Gammagarn model.

Some miniature Loi Ongk Statuettes ware also released in various sacred metals. A very Important and sacred Ceremony was performed with accurate Astrological Alignments and a host of Thailand’s great Master Monks to Empower and give Blessings.

The Style of Future Additions

As a result of having read various feedback mails and consulted some of you about what you feel as the store has grown, the main message i have got from all of you , is that, because you all love amulets and seek the best most powerful and sacred ones from the best masters, but not always do you yourselves know which those are. I have noticed that you expect me to not stock amulets or masters that i myself do not find to be powerful, and that i present only the best or the worthy ones to you based on what i feel are truly powerful amulets from capable masters

I have thus decided to do this, but that because some masters work well for people that i myself may not find so attractive, i think i shall still continue to offer and increase the widest choice of amulets possible, but that i shall have a special section of the store with my personal recommendations for the best amulets, and that i shall post honest blog articles about any particular editions or particular amulets i feel should be appreciated but which may not catch the eye unless you know

For example, one amulet whose title does not reveal the true power and greatness of the amulet, is the Takrut Maha Jakkapat from Wat Tham Wua Daeng, because it is in fact a product from the hand of the Great Living Master ‘Luang Por Simplii’ who performed a constant nine day vigil of empowerment on the Takrut. They are heavy old school leaden Takrut Tone, wrapped in strong cord with gold leaf and lacquer and are empowered by a Monk who has eluded International and National fame but who is for a small circle of people in the know an ‘Undeclared Arya Sangha’

For those of you who don’t know, an Arya Sangha is one who has entered and past stream entry and bvecome one of the eight types of Enlightened Beings. It is this kind of Practitioner who Masters the Abhinya Powers, and it is the amulets of such masters which have the true Miracle Power as read about in Legends of Old. 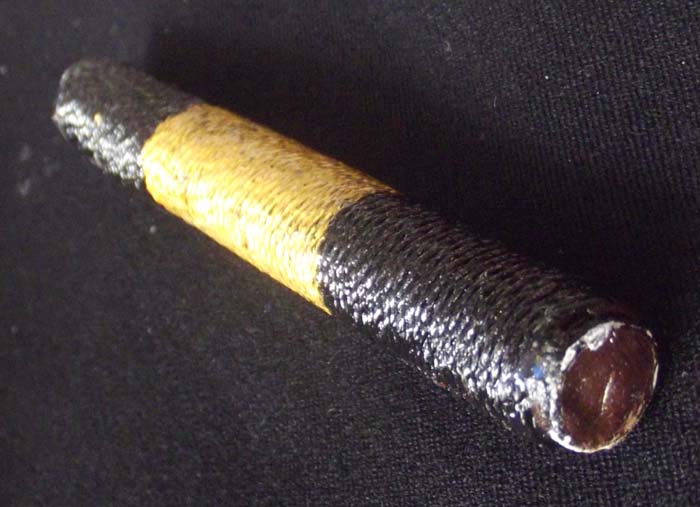 This is therefore the amulet which i would recommend in this post as the ‘so good you’d never know it if i didn’t tell you’ amulet of choice. It is probably sold out soon but i hope to restock if i can find a number of them because i seriously believe in this Takrut and wish to provide it for customers. 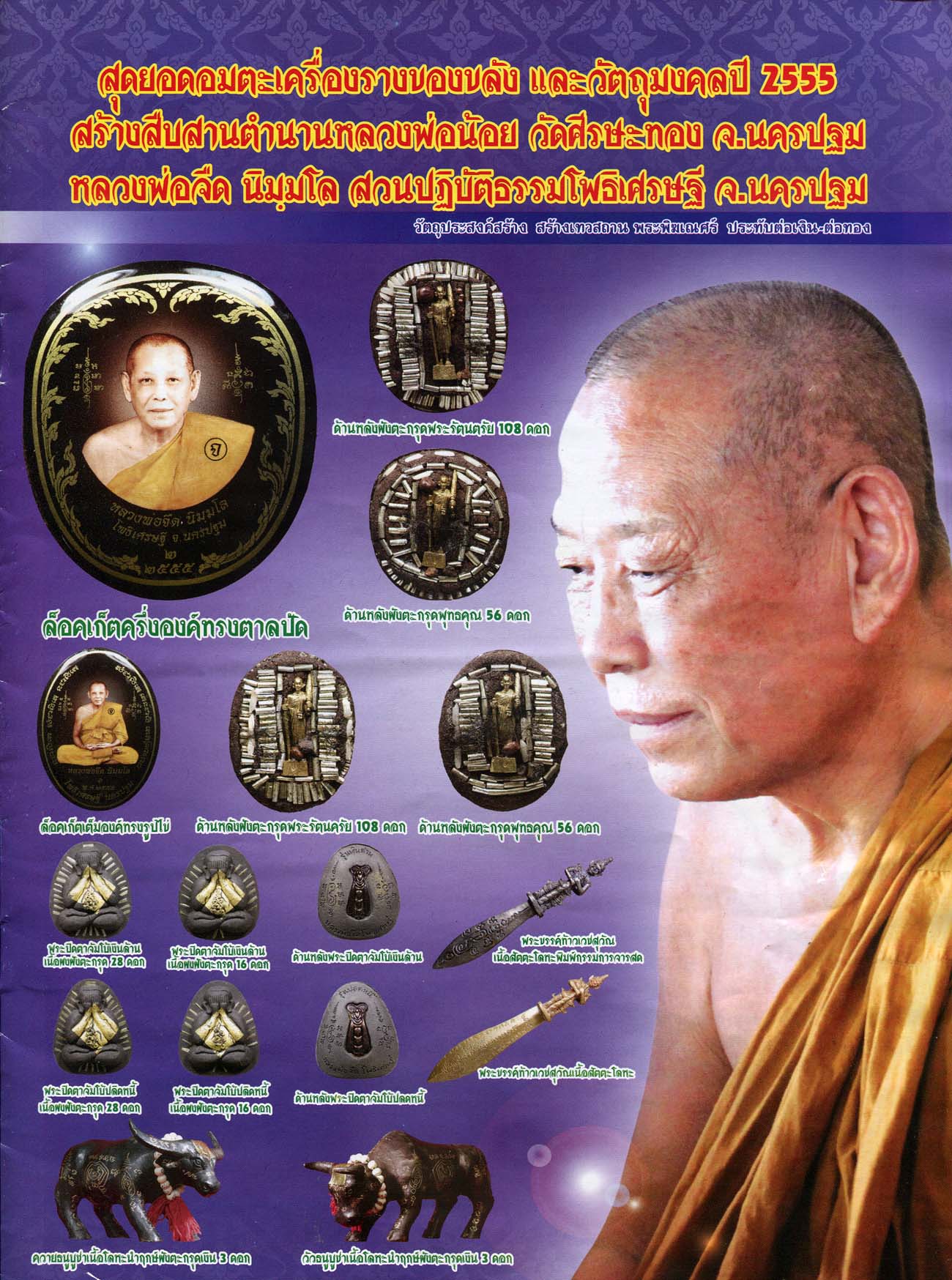 Coming up in the next Month, is the most amazing selection of Lockets, Pra Pid Ta Amulets, and Wua Tanu Bucha statues (and loi ongk amulets) coming from Luang Por Juea of Wat Klang Bang Kaew of Nakorn Patom. This edition is released for the Suan Badibat Tam Po Sethee with the funds going to the construction of a large Pra Pikanesworn (Ganesha) statue sitting on a gold and silver Bee at the temple. The statue will bring wealthy blessings to devotees who pray to it at the temple, and will help to reduce poverty. The wealthy blessings of those who support the building of the Deity with these amulets are also to be expected.

All of the above editions are of the best sacred ingredients and blessed by powerful Masters, according to our close study and pre-investigation of  each edition before making the decision to choose and select them for our customers. The Lockets by luang Por Juea are made using the finest magical sacred muan sarn and are exceptional in their outstanding originality, and immensely concentrated power. The Lockets have either 108 Takrut with a Pra Sivali Loi Ongk statuette or 56 Takrut with Pra Sivali. The Pra Pid Ta Amulets have 28 or 16 Takrut. The Takrut themselves contain various Wicha which i shall document in the descriptions of each amulet when i add them to the store. The Lockets and Pid Ta are both available in two different Pim, with a special three amulet locket and Pid Ta Gammagarn collector set making an extra three models to the complete series. The Gammagarn Locket has 112 Takrut (Takrut Pra Radtanatrai 108 + Takrut Pra Putta Jao Sip Hok Pra Ongk 16 = 124), the Ong Kroo Lockets have 108 Takrut Pra Radtanatrai, and the Pim B models have 56 Takrut Pra Puttakun. 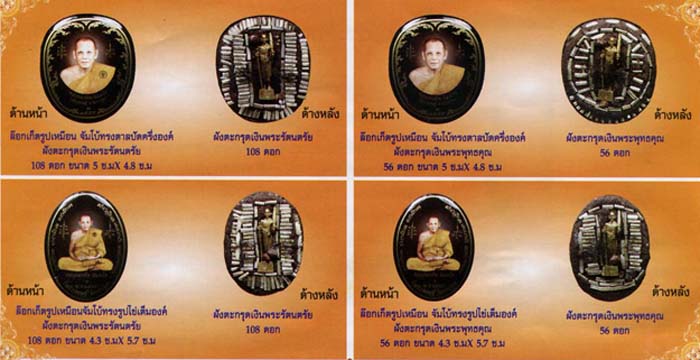 Apart from these, we are expecting to receive some exquisite Bucha statues in bronze with pure gold leaf, of Luang Por Supar sitting on a Money Spider. Wes shall also be stocking the ‘Rian Jao Sua’ amulets from this edition, which are Classic amulets of Maha Lap and Kong Grapan variety, and this edition looks set to become a classic from an Aged Master of the Generation of the Greats, with an immensely long and respectable trajectory of Practice and Merit accumulation behind him. An extremely collectible edition in my opinion, of the finest Artisanry. 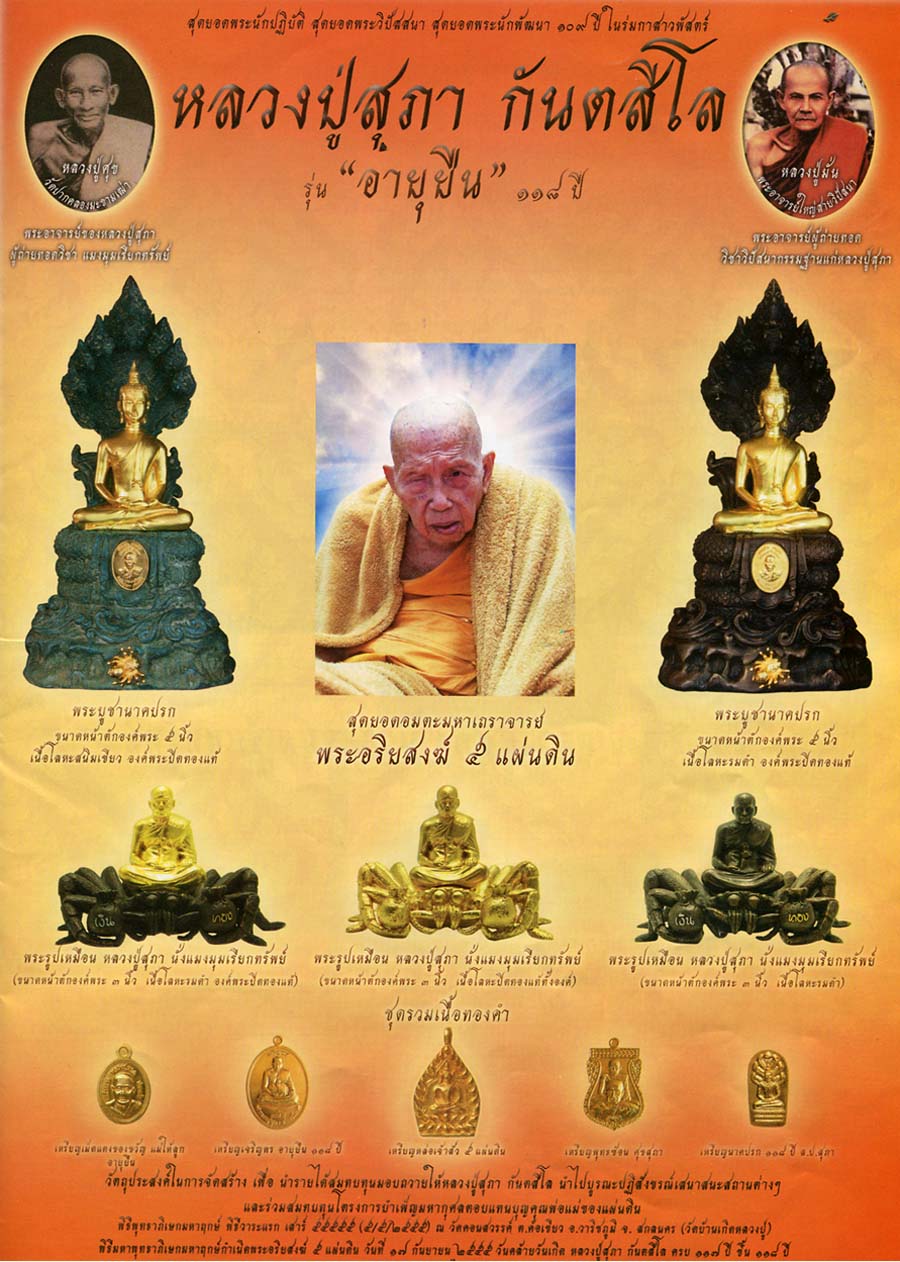 A lot more  amazing amulets are of course on their way, including a host of occult Charms and Super Powerful ‘Chin Aathan’ carvings from Pra Ajarn Dtecharangsri. I hope you enjoy browsing and reading about the new amulets which are being released and coming to the store, and that they will be of interest and carry all the greatest blessings. Keep Your eyes peeled this week now to see the new additions!