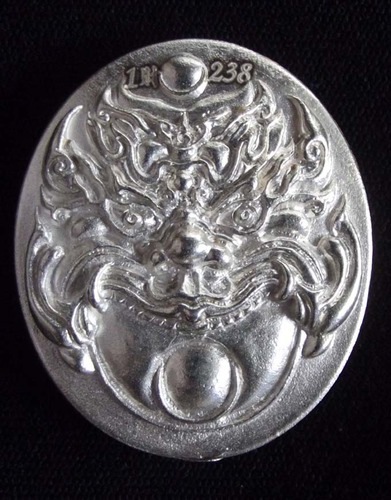 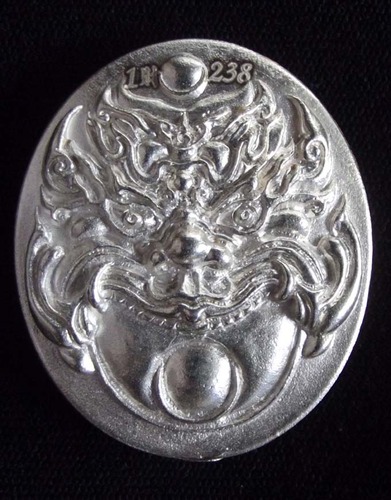 The Conquering Mara Edition of Rahu Amulets from por Tan Kloi were included in two Putta Pisek Taewa Pisek Empowerment Ceremonies and is an edition which is of Great Historical Importance for the Lineage Masters of Khao Or Southern Magical Arts. First empowerment was held in Ubon Ratchatani with a host of Isan Masters, and then again in the South, with the Khao or Masters present. This version is made in Nuea Ngern (Solid Silver), and is second from top of the series below the solid Gold version. 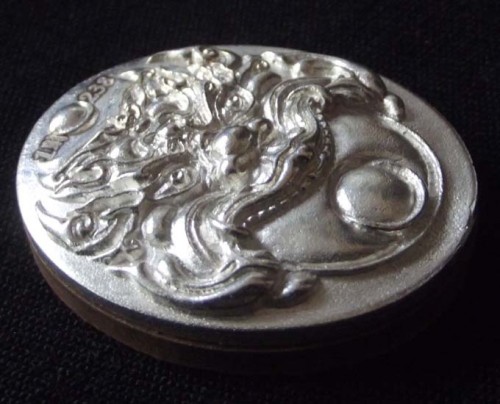 Each smelting of each different Sacred Metal were recorded and documented for future recognition of which smelt the amulet came from (for competition purposes – the amount of documentation and attention to details given to this edition shows strong signs of high collector value in the Future and competition status).

The amulet is composed of two pieces, face and rear, bound together. The front face is made froom Solid Silver, and the rear face is Sacred herbal Powders. The Solid Silver versions all made in single smelting round, and all possess the #1 code stamp, on the top left of the front face, and a numbered series code on the front face top right, ranging from 1 – 415 in total. The first number indicates which of the smelting sessions the amulet belongs to. The second symbol is the Sigma Code stamp of authenticity, and the last number is the personal code number of each amulet.

The amulets were made in various Sacred Metals and Powders and empowered in two Major Putta Pisek Ceremonies, along with some Hun Payont Soldier Amulets, some very rich sacred powder Pid Ta amulets in special edition, and a set of Pra Kring and Pra Chaiyawat Loi Ongk Buddha statuettes in Sacred Metals, and some Por Tan Kloi image coins.

The metal front face is bound to a Sacred Powder rear face.

415 Amulets made in Solid Silver

The rear face has a ‘Met Kring’ (the same Magical Bead that is inserted into Pra Kring amulets), some of Por Tan Kloi’s hair inside, and some Thai Paper Money stuffed within the amulet. The number of the edition and smelting code on a copper foil is also attached. 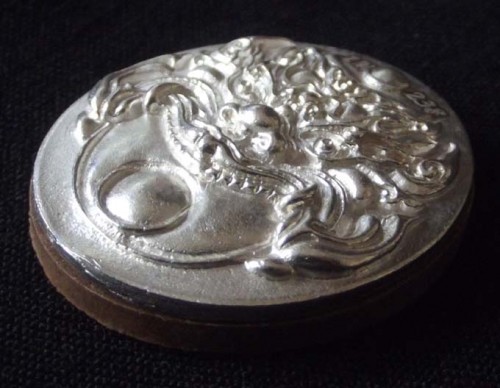 Each amulet has an individual numbered code stamp and individual blessing with gold powder on the sacred powder attached rear face. The amulets received an intensely powerful Blessing on both occasions. Only 415 Amulets were made in the Luxury Solid Silver versions.

Each block press or smelting round for each different Sacred Metal was recorded and the resulting amulets and surface finishes from each smelting were also recorded, which is a sure sign of these amulets being accepted and extremely sought after in professional collector circles and high end amulet collector scenes in the Future.

The presence of these Important members of Khao Or Magical Brotherhood all joining hands to empower these Pra Rahu, Hun Payont and Pra Kring Amulets will be an event that becomes part of the Historic and centuries Old Legend of Khao Or Sorcery for the Official Empowerment Ceremony of these Powerful (and Highly Collectible)Classic Amulets. Pra Rahu is Prayed to by Thai Buddhist people to reduce the Ill Fate and Bad Karmic effects, for it is rahu who resides in the Darkness and sends bad luck to our Astrological Line of Fate. By Appeasing (with Offerings) and Praying to Pra Rahu for Mercy, we can reduce his Wrath and Increase his Metta towards us, in turn Increasing our Luck again.

For Gamblers, Pra Rahu is an essential Deity to keep Appeasing so that Bad Luck streaks do not set in for too long. For the year 2012, Almost Everybody should Bucha Pra Rahu, especially after the Eclipses which were Occurring.

Por Tan Kloi is a Master of Khao or Magic, whose Fame for making Powerful Hun Payont Soldier Ghost amulets is heard of Worldwide. His Hun Payont is revered by a multitude of people from a large number of different Nations, from Indonesia to USA

Amulet Comes with original Temple Box – Can be Encased if Desired 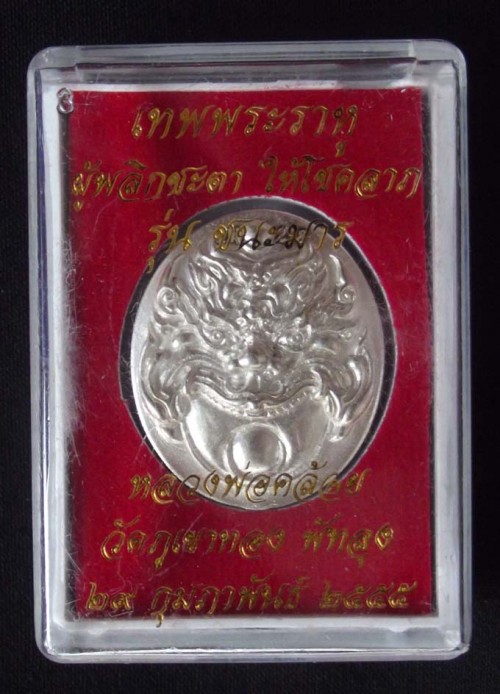 How to Pray to and Make Offerings for Pra Rahu Deity

Most amulets in this edition sold out by pre-order before they were even blessed and released, and are very difficult to find already, for which reason we are very pleased to be able to provide some for our customers.