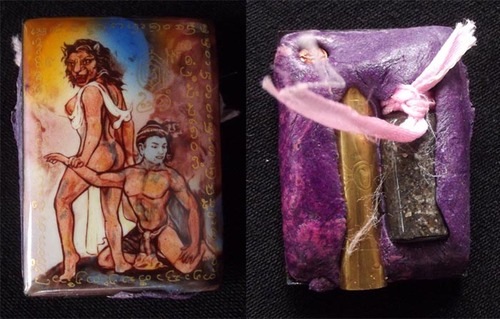 The lockets were made in standard and ‘Pised Ongk Kroo’ Master Piece versions. The standard version has a piece of Mai Marum Sacred Holy Wood, one Takrut Maha Sanaeh, a Look Namo slug, and one Dork Tong flower. The Ongk Kroo Master Piece version having a phial of ‘Nam Man Saming Pasom Pong Prai’ (Tiger-Lady Oil mixed with Prai Powders), one silver Takrut Maha Sanaeh and two Look Namo Slugs inserted. Nam Man Saming is an extremely powerful, rare and difficult to make Prai Oil related to the Female Saming (half Woman half Tiger), that exudes a powerful pheromonic effect on the Hormones and arouses Passion, also Increasing Dominion over Men. The Sacred Prai Powders in the oil phial charge the oil with concentrated magic to increase the extent of the effects. The Phial of Prai Oil has an enchanted pink ribbon wrapped around it. 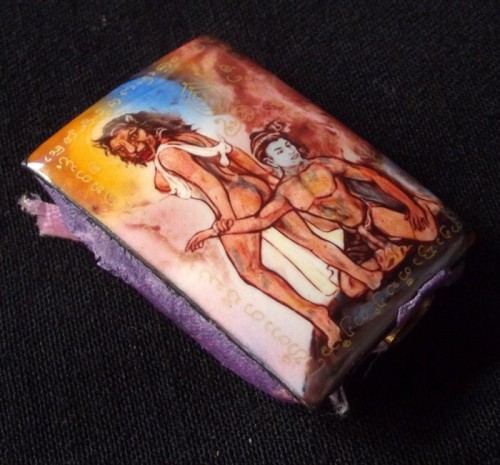 Released in the ‘Bucha Kroo 2555’ Master Day Ceremony with a large array of other amulets, all in limited edition, in small numbers.

Each individual ingredients of the Locket have received individual empowerment according to the individual methods of the Wicha for empowering herbs, woods, powders and pollens, Prai Oils. The final Wicha combined together forming the Locket, which then received the final Invocation of the Deva to rule over the amulet, and bestow blessings. 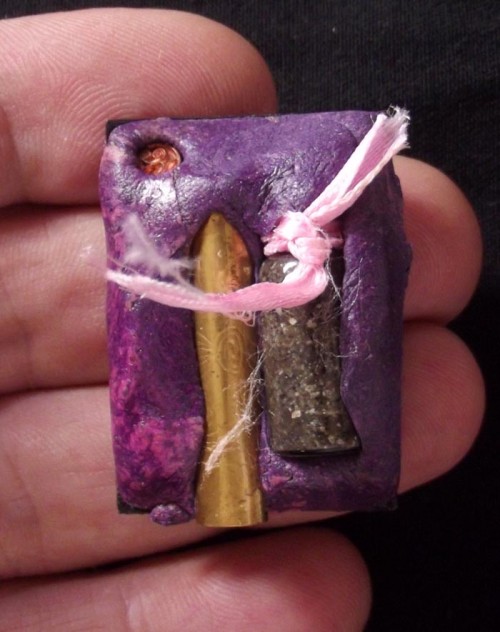 The proper Invocation of the 4 elements and 32 components (Kata Akarn 32) were performed and a final empowerment was performed on the most Auspiciously aligned Date for increased Charm and Attraction. 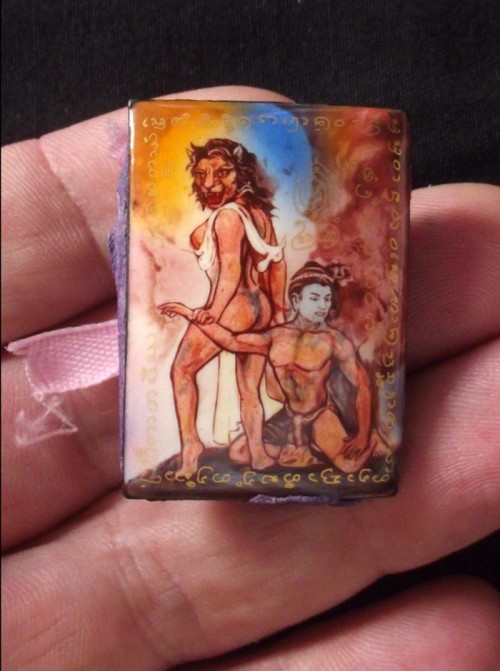 Sacred Agkhara Spells in Ancient Lanna Script are Inscribed around the surface of the Locket, which is made from real shell. The rear face is filled with ‘Pong Maha Sanaeh Pasom Wan Dork Tong,’ – more than 100 types of Sacred Powders, and has a golden Takrut with a Maha Sanaeh spell within it.

A small phial of ‘Nam Man Saming ‘ (Tiger Prai Oil), with a golden Takrut Hua Jai Suea Puhying immersed, is embedded into the thick Muan Sarn powders. Nam Man Saming is a very difficult and rare Prai Oil to make due to the very small number of occasions where the necessary ingredients can be found or donated. The oil is specifically aimed at increasing sexual attraction and to arouse the passions (Gamakun), and increasing the power of Dominion over others (Maha Amnaj). 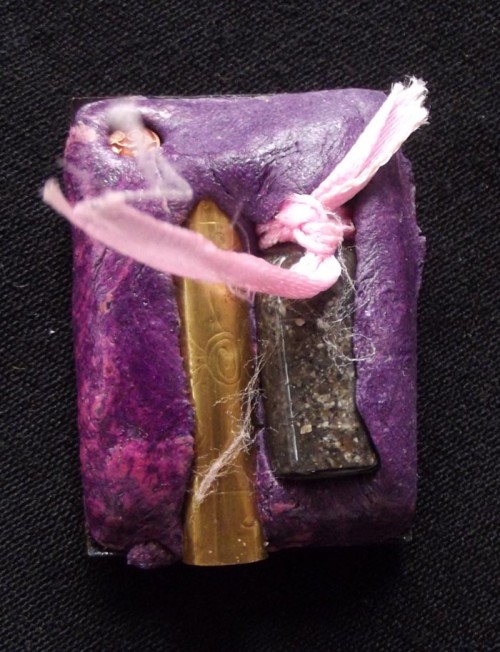 No Kata Needed, but can use any Kata Maha Sanaeh, as well as the Traditional Kata Aaratanaa Pra Krueang to ask for wishes.

Always use the Maha Namasakara before chanting to any amulets (Namo Tassa).

How to Chant Namo Tassa and the triple refuge

Pra Ajarn Oe is currently one of the present Era’s most prolific Sorcerors and Master Amulet makers, whose large array of different wicha allows him to present his Devotees with a vast array of different amulets, which however are only ever made in small numbers, resulting in a wide choice of items that are inevitable future rarities due to the extremely small numbers made in each different edition. Pra Ajarn Oe is one of the fastest developing practitioners of Khmer, Karen and Lanna Sorcery, whose Magic Powers are fast becoming Legendary as each new edition brings news of successful results back to the Temple, and fervor increases in the search for one of his powerful Maha Sanaeh Occult Charms 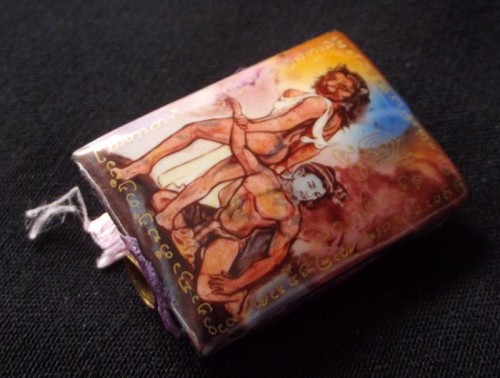 Apart from the authentic Magical Power of his amulets, their originality and subtle beauty, fine attention to empowerment and quality design, is an extra factor to appreciate from this High Calibre Unisex Attraction Charm.