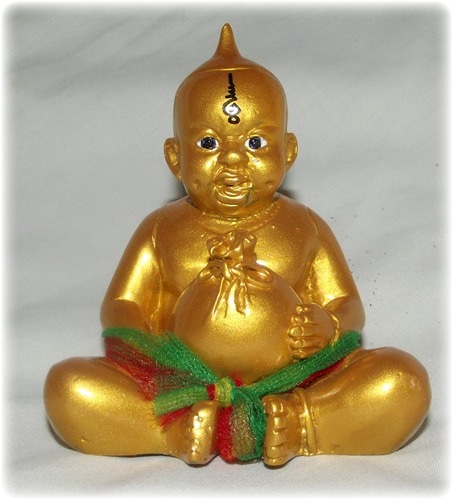 Now those who enjoyed the benefits of bucha to the famous kumarn tong ‘gaem bum’ loi onk mini statuettes of Luang Ta Chuan, can rejoice that we have a bucha size special ongk kroo kumarn tong statue for his devotees to bucha.

Luang Ta Chuan is renowned for empowering kumarn tong in a way that is like no other, and those who worship his kumarn swear that any thieves or burglars are always thwarted, and that business runs well and smoothly, and regular windfalls arrive. Luang Ta performed the essential invocations of the four elements and the 32 parts of a living being, before calling the prai spirit of the kumarn tong ‘hua hlaem gaem bum’ to inhabit and reside within the amulets. Luang Ta’s method is very different in the sense that he lays down in a coffin to perform the incantations within the Meru building in the temple of Wat Khwang. 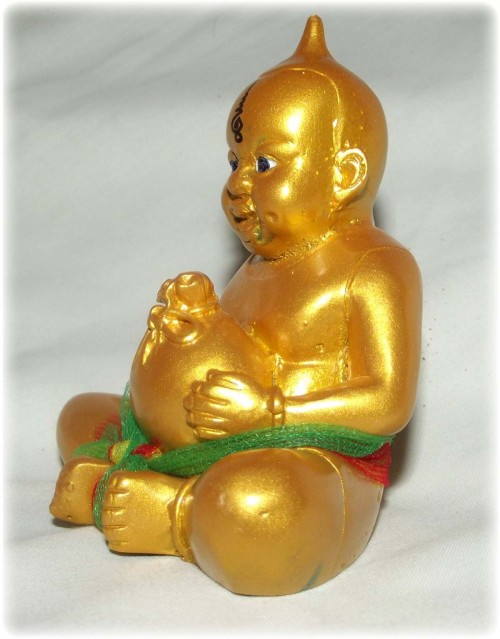 899 statues were made in this edition

The kumarn ‘gaem bum’ was empowered with incantations with Luang Ta inside a coffin placed within the Meru cremation building. As Luang Ta performed the incantations, all the lights in the temple grounds went out. 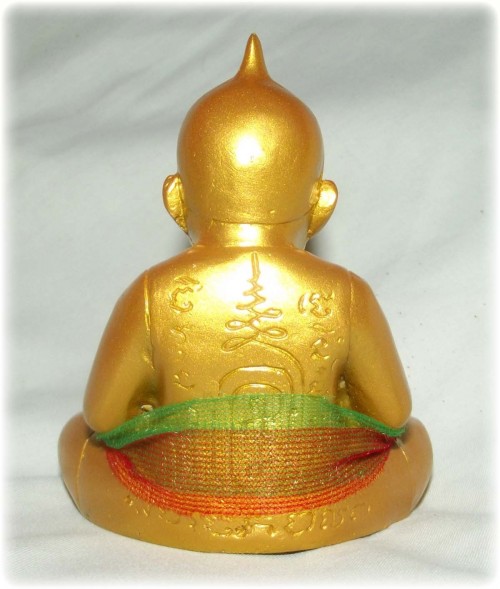 The rear side of the kumarn has Luang Ta’s inscription of the yant ‘ta rit reng lap’, which is the eye of power to speed up lucky fortunes.

The kumarn tong ‘gaem bum’ is a result of the devotees of Luang Ta Chuan begging him to make another edition after the immense success of his kumarn tong ‘pha daeng’ amulets (kumarn tong with red clothes), where many people won lotteries with after revering the amulet. The bucha statue is the result of the looksit repeatedly beseeching Luang Ta Chuan to make something special to guard over and bring prosperity to homes and shops of the devotees. A larger image for bucha on the altar was highly needed, for the kumarn ‘gaem bum’ has become a favorite of Thai kumarn tong devotees, as popular as the wicha of Luang Ta Chuan himself.

Luang Ta is a master sorceror monk, whose choke lap and maha lap amulets are of the most effective to be found, for example his rian ‘Laekhasart’ lottery coins, and ‘ngern pling’ Laoatian monetary unit amulets which have brought so much success and prosperity to many a merchant and gambler. 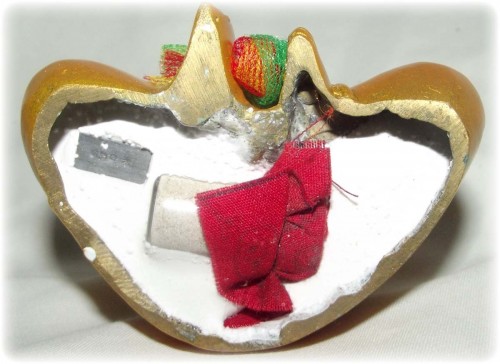 The base is empowered with sacred powders, and a bottle of prai kumarn powders sealed with a sacred yantra spell on red cloth.

Luang Ta says that he had to master the kammathana realizations of asubha kammathaan, and the kumara sadti meditative skill. He had to develop the consciousness of the death state to be able to bcontact and invite the dead spirits of prai and kumarn tong devas to dwell within his amulets. It is necessary to attain arupha jhana and extinguish all sense of taste, smell sound and touch, in order to tune in to the devas of the realms of the dead.

His wicha kumarn tong is varied with mastery of various kinds of kumarn, such as the kumarn tong ‘pha daeng’ (‘red clothes’), and the kumarn ‘gaem bum’ (‘puffy cheeks kumarn‘). The large number of devotees who have taken one of his kumarn for bucha and had lucky lottery wins was so great that the kumarn ‘gaem bum’ and his other kumarn have all become as popular and believed in as his other famous lottery effective amulets (ngern pling and the rian ‘Laekhasart’ amulets)

The kumarn ‘gaem bum’ bucha statue has a pointy head and bulging cheeks, and holds a sack of treasure and gold. He is bound with the ‘phaa saam see’ tricolor magical ribbons. Many people believe the bucha image to have considerably more power than the small loi ongk, for the results seen till now, which is saying something, because the loi ongk has already received legendary status since its issue.

Because of his attainment of these abilities, he performs the successful empowerment of kumarn tong with such ease as to make other master appear unskilled, which is in fact not the case, simply that Luang Ta is one of the world’s top expert masters of this wicha, it is simply in his nature. The kumarn tong ‘hua hlaem jao sap gaem bpum’ carries a money bag, and is empowered to assure increase monetary income with the sacred yant ‘ta rit reng lap’ (yant of the eye of power to speed luck and wealth), to make the kumarn prevent you from running out of money and to attract income wherever you go. Luang Ta performed incantations on the statues and amulets, within the cremation chamber of the Meru building for a period of 7 days, and allowed the same number of angelic devas who arrived to assist to also enter the kumarn tong and accompany the amulets as an extra guiding force and protector.

The statues were also made as loi ongk portable amulets, in nuea loha rom dam of which 3352 were made, and  in nuea dtakua dee buk (ancient lead) of which only 1352 takrut were made. 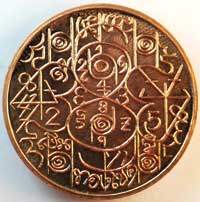 Luang Ta Chuan is very famous because of his amazing ability to give accurate lottery numbers. His famous rian ‘hai huay’ lottery wishing coin amulet has had success with several devotees winning lotteries. Many of his amulets have reached international fame including the Sivalingk see nang lorm ‘palad khik’ type maha sanaeh amulet which features a metal Shiva lingam encircled by 4 naked maidens.

Can be encased in waterproof casing if wished. 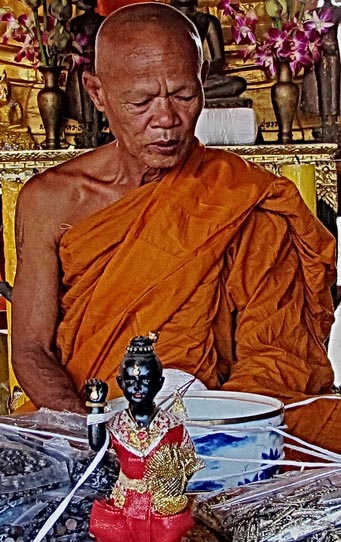 Offer sweetmeats, drinks and fruits and trinkets, light five sticks of incense outside for informing the local spirits and ruling devas, then light three sticks to inform the Buddha in the home, of the arrival of the kumarn.

Use nine sticks to pray to the kumarn.

After bucha then pray, and ask the kumarn to fulfill your wish.

The kumarn can be placed on your own altar, but is also popularly placed on a pan kroo tray, for respectable bucha. 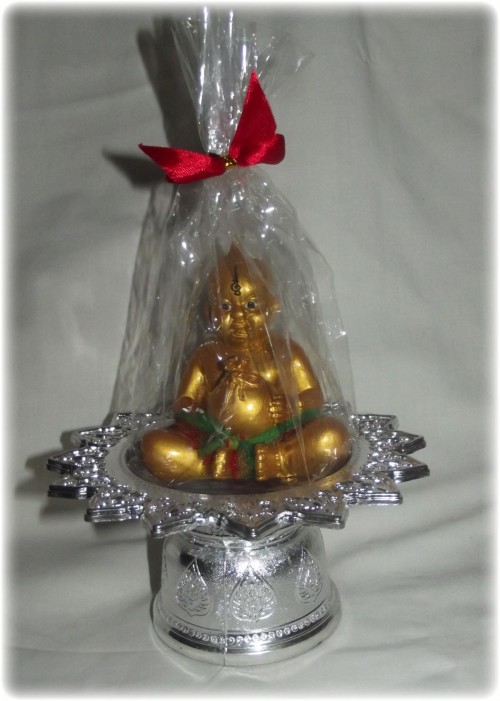 The pan kroo in the right size for this bucha (5.5 inches diameter), is available as additional option if you choose, in silver or golden colors.

Number of Amulets Made: 899