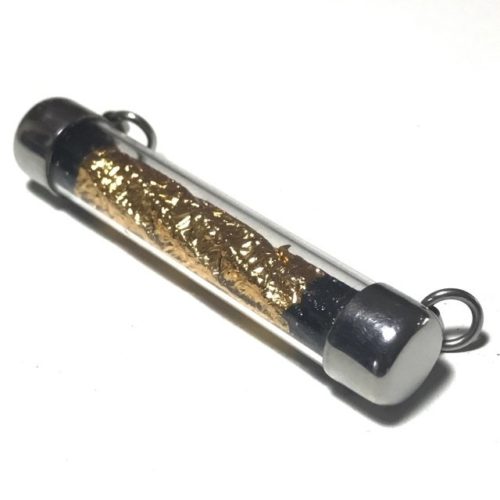 Takrut Tone Mad Chueak Long Rak Pid Tong, leaden Takrut Yantra scroll spell wrapped with magical cord binding, black herbal laquer coating and gold leaf blessing, from Luang Por Jamlong, of Wat Chedi Daeng. The Takrut was made in two different colours; black for Kong Grapan Chadtri , and also had a red version for Metta Mahaniyom. This is the Black version for Kong Grapan Protection and Invincibility.
The number of people who reported success with this edition is so immense, that few people have any doubts in their minds about the powers of this amulet, for the sheer number of success reports recieved. The statistics have spoken for themself, and this Takrut now enjoys immense, and unquestioned status as a powerful amulet.

The Takrut are already now a great rarity, after this edition generated great success with a large number of devotees, and the Takrut came into the National news for its Miraculous power. lp Jamlong uses an ancient Wicha from the Krung Sri Ayuttaya Era, which comes from a very ancient Kampira Grimoire found from that time.