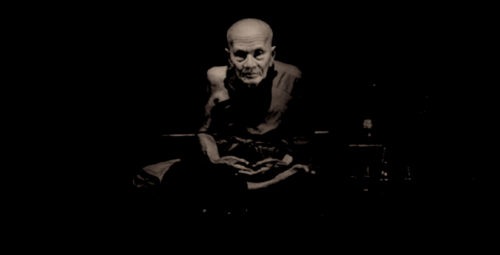 Luang Phu Tuad is known by all Thai people in every Province. Sometimes he is known as “Luang Phor Thuat” and sometimes “Luang Pu Thuat. “Phu”, meaning “grandfather” and “Por” meaning “Father”. He is possibly most famous with the common folk for his legendary powers and for the miracle of turning seawater into drinking water. This is in fact his nickname; “Phu Tuad Yiab Nam Tale Jerd” (Phu Tuadstepping over the seawater and turning it to fresh water).

Luang Por Tuad was born about four hundred years ago, towards the end of the Reign of King Maha Tamaracha of Krung Sri Ayuttaya, in Suan Jantr village in the municipality of Chumpola. As a child, although having been born into an extremely poor family, he still was renowned for his compassionate and generous attitude. He liked to make merit (called “Tam Bun” in Thai) both in the Buddhist temples and in everyday life with his kindness to others. He never hurt other living beings, be they human or animal.

Luang Phu Tuad was already displaying his miraculous powers from a young age, when one day, his mother went out in the garden and saw that an extremely large snake had wound itself around the hammock where her child, the young baby Luang Phu Tuad was sleeping. he snake would not permit anyone to approach near to the hammock and the child.

After watching for some time, the parents decided that this giant snake was an angelic Deity come to show the special merit of their child. So they went and got some puffed rice, flowers and incense and rushed back to offer it to the snake, in reverence. When they made the offerings to the great snake, it wound itself out of it’s embrace with the hammock that baby Poo was sleeping in, and left.

The relatives all rushed straight over to the hammock crib with great concern for the baby’s safety. But to their surprise, the baby was not only sleeping safe and soundly, but, on his chest, was a multicolored crystal, glowing with strange radiance. His parents kept it, and since then, the family managed to survive a lot more easily, and were successful in their business activities. There are many more miraculous stories of the legends of Luang Phu Tuad which relate his incredible deeds and supernatural feats, which have made him perhaps the most famous Guru Monk in all Thai Buddhist History.