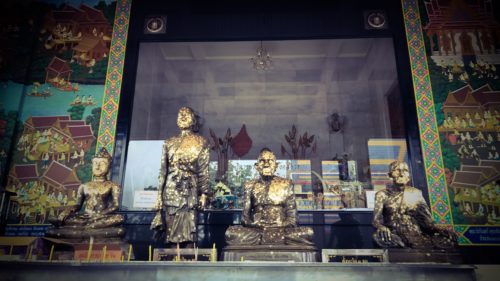 Some interesting facts about Wat Juk Gacher, and ex abbot Luang Phu Rerm Baramo, as well the other Abbots, and a look at some attractive Pra Khun Phaen 1st edition limited series amulets with meritorious motive of restoring the temple Shrineroom. 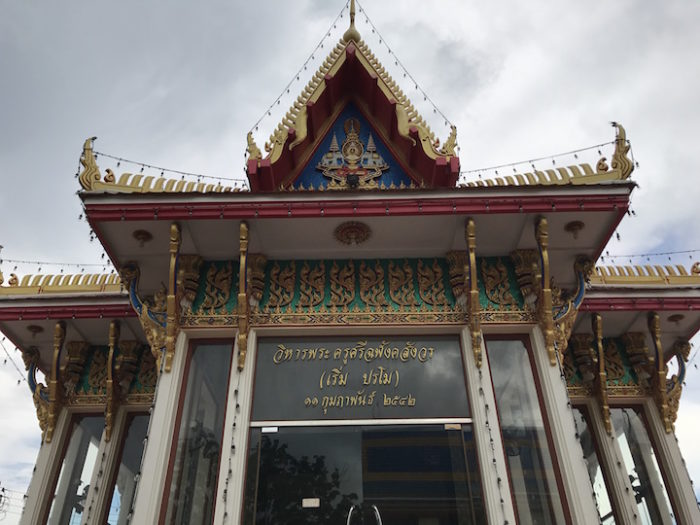 Thailand Amulets’ owner Ajarn Spencer Littlewood recently paid a visit to the temple of Wat Juk gacher in Sri Racha, Chonburi Province, to pay reverence to the Great Luang Phu Rerm, deceased ex Abbot of the temple, whose amulets are famed and highly revered around the Nation, and to learn some more about this temple, and the lineage of Abbots up to the present day.

Of course the topic of amulets also came into focus, and Ajarn Spencer supported the temple by obtaining some of their amulets from the 2557 and 2558 BE editions, released by the current Abbot Pra Atigarn Jaleuk (Pra Ajarn Rung).

Ajarn Spencer entered one of the shrinerooms which had three landscape miniature replicas of the temple of Wat Juk Gacher, documenting the growth and development projects of the temple over the time in which the last 5 abbots lived, including the present Abbot, Pra Atigarn Jaleuk.

Ajarn Spencer made a video of this, along with a spontaneous Narrative, to explain what the models represent, and posted it to his Vlog on Youtube. So here it is to enjoy.

The name of the temple of Wat Juk Gracher, is also the only temple with this name in the country. This is because of an olden days folklore of a place in the forest in what is now known as Bang Lamung (Chonburi), there was a place where woodcutters and hunters and other people who lived in the forests would have some huts, which was known as ‘Juk Gacher’. The word ‘Gacher’ comes from ancient Khmer, and means ‘Tree’. 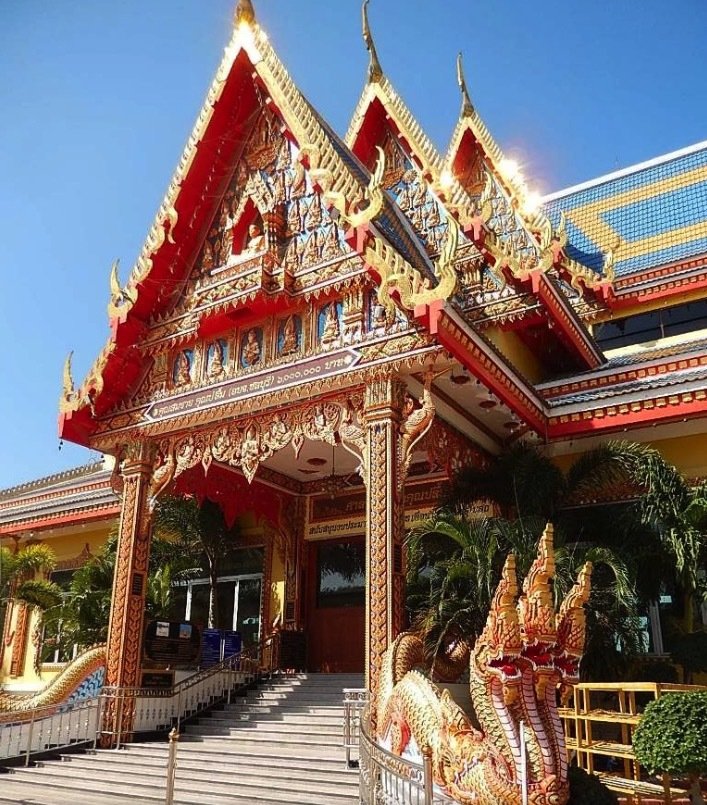 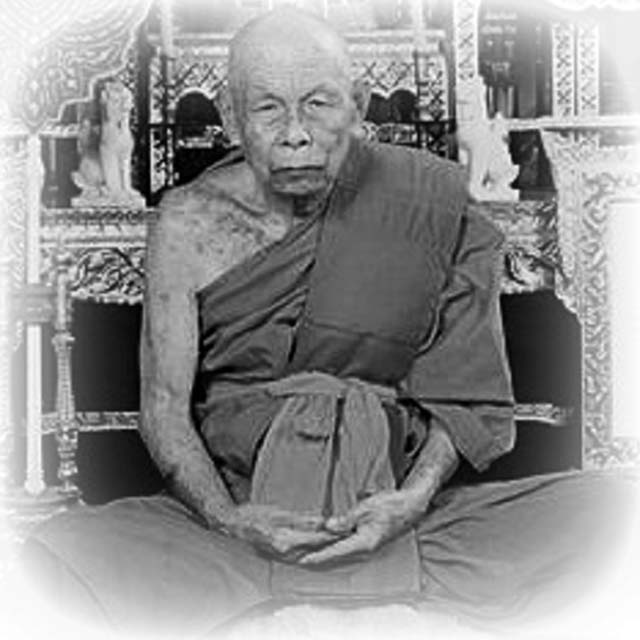 Apart from the above video, Ajarn Spencer also brought us a selection of the amulets he had obtained with a donation to the temple, which we will be adding to store in the next days, and also are currently handing some out as free gifts to customers with their regular orders, which is something existing customers know we do with all orders (send something for free). 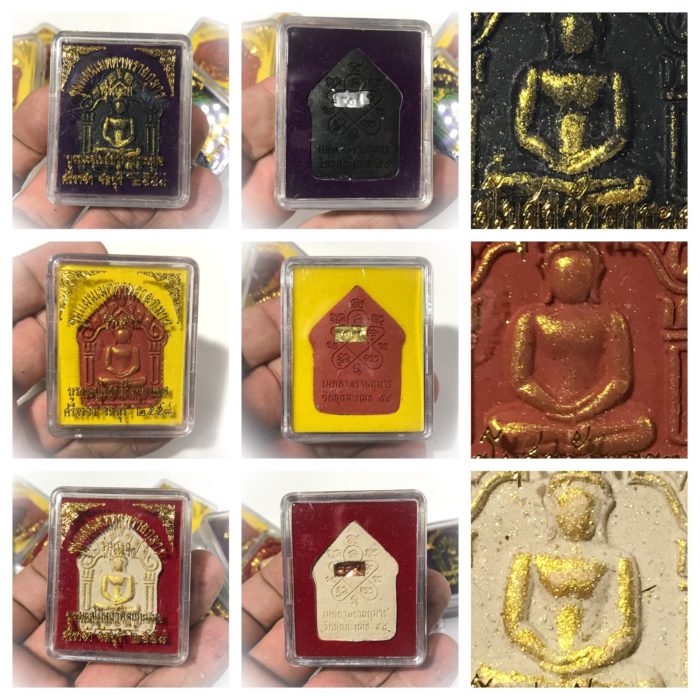 Here are some Pictures of some of the amulets we have received for distribution to you, which include Pra Khun Phaen Metta Prai Kumarn amulets made and blessed by Chonburi Gaeji Ajarn Master Monks of the Luang Phu Tim Lineage, some Lockets of Luang Por Rung, and some Monk Coins bearing the image of Luang Phu Tim, which are of high quality casting and continue the Dtamra of Luang Phu Rerm’s amulet designs, which received excellent Blessing Ceremony, and National news Coverage. 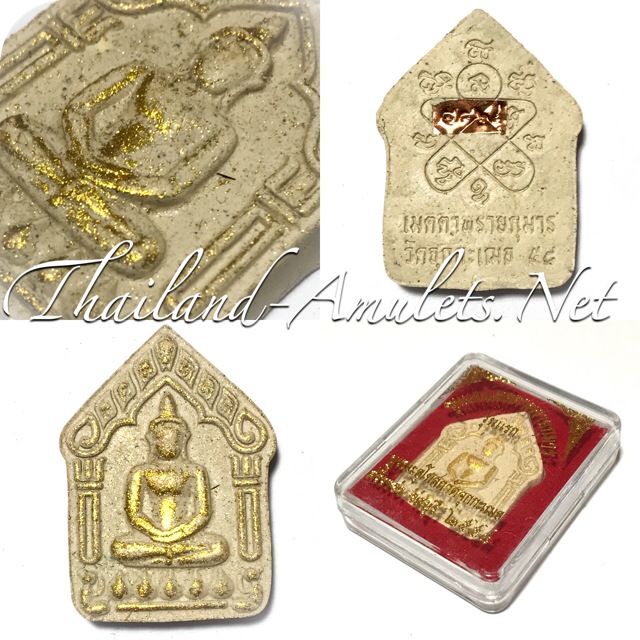 Modern Collectors Classics for the Chonburi Province Amulet Pantheon Collector; Many aficionados collect by regional areas, Chonburi and Rayong Provinces being amongst the most preferred Regions for master-Class Amulets. 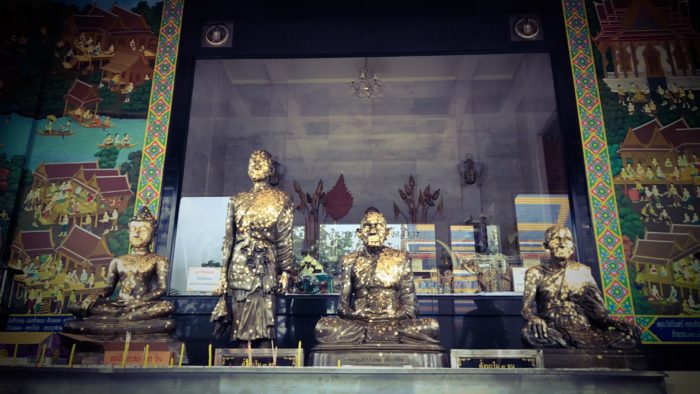 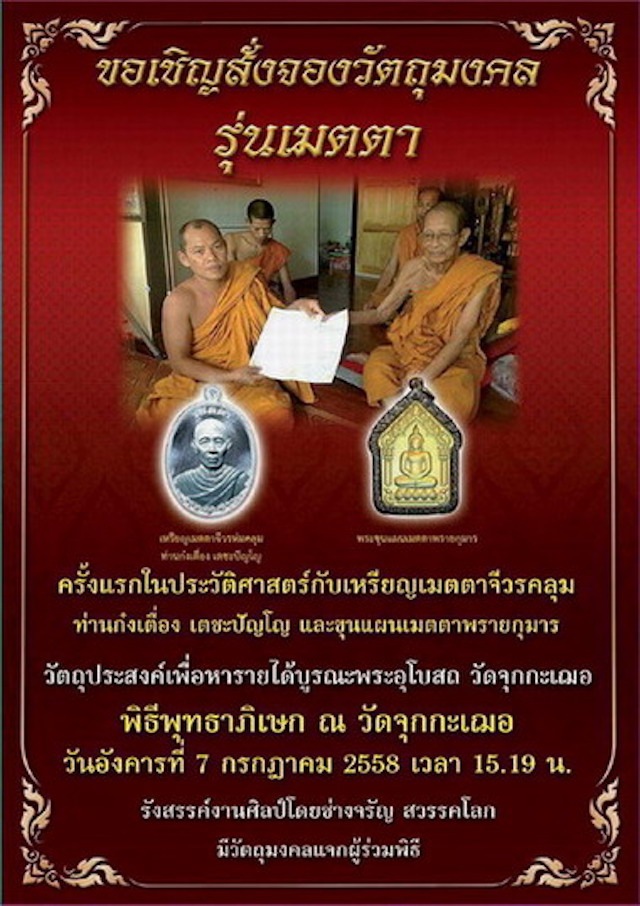 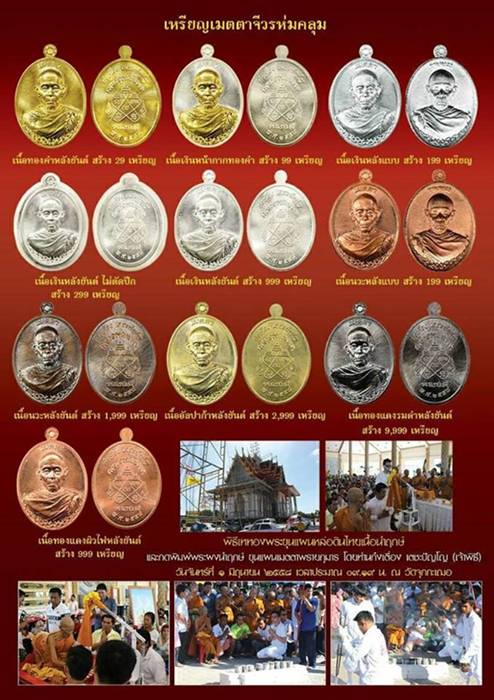 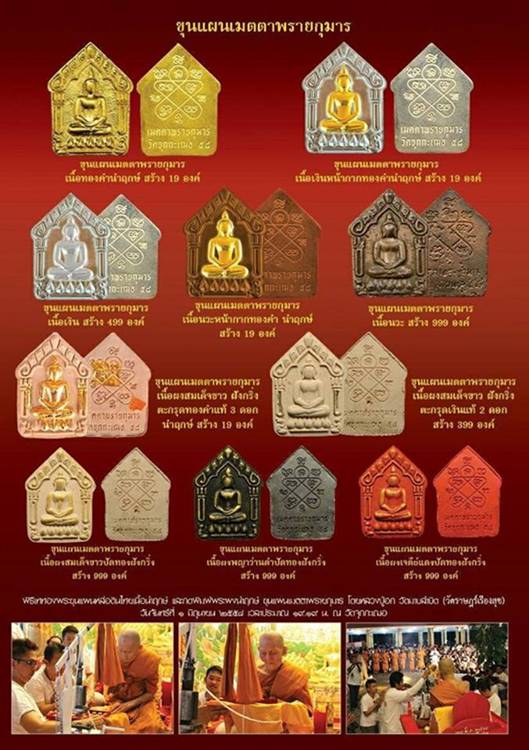 Below; National News Coverage of the ‘Run Metta’ Edition amulets, to fund the restoration of Uposatha and other Shrinerooms at the temple of Wat Juk Gacher. 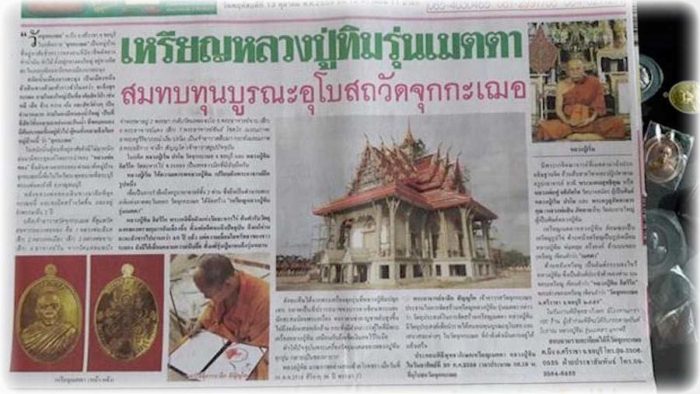 Pra Atigarn Jaleuk has received and preserved the continuation of the Wicha of Luang Phu Rerm, and is an eminent creator of many ‘Pra Anuraks Luang Phu Tim’, meaning, the documentary tradition of continuing the making of the image of Luang Phu Tim in the form of amulets which are faithful the the style and tradition of this Master Lineage. The coin amulets of this edition were commissioned to be designed in the image Chang Gong Dtueang, and were made by one of the top Artisans of the Amulet World, which makes them automatic Pra Niyom collector class category amulets 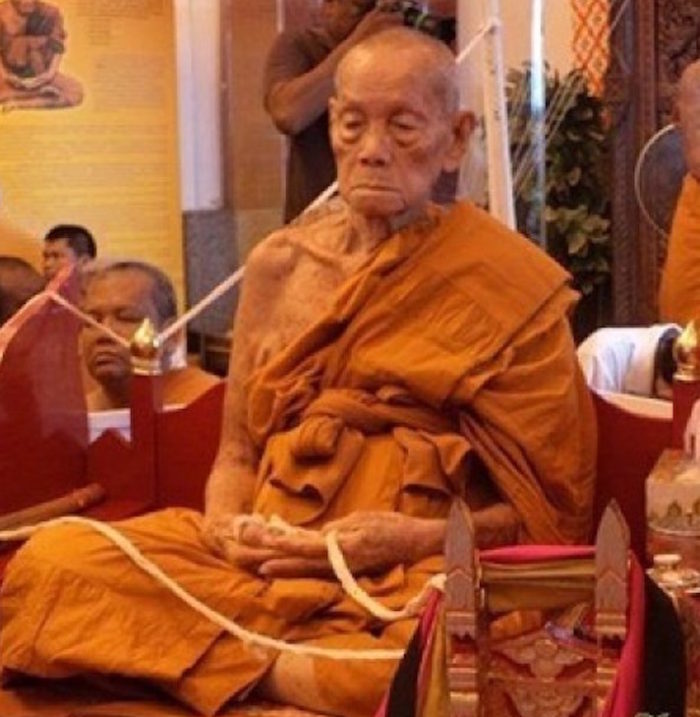 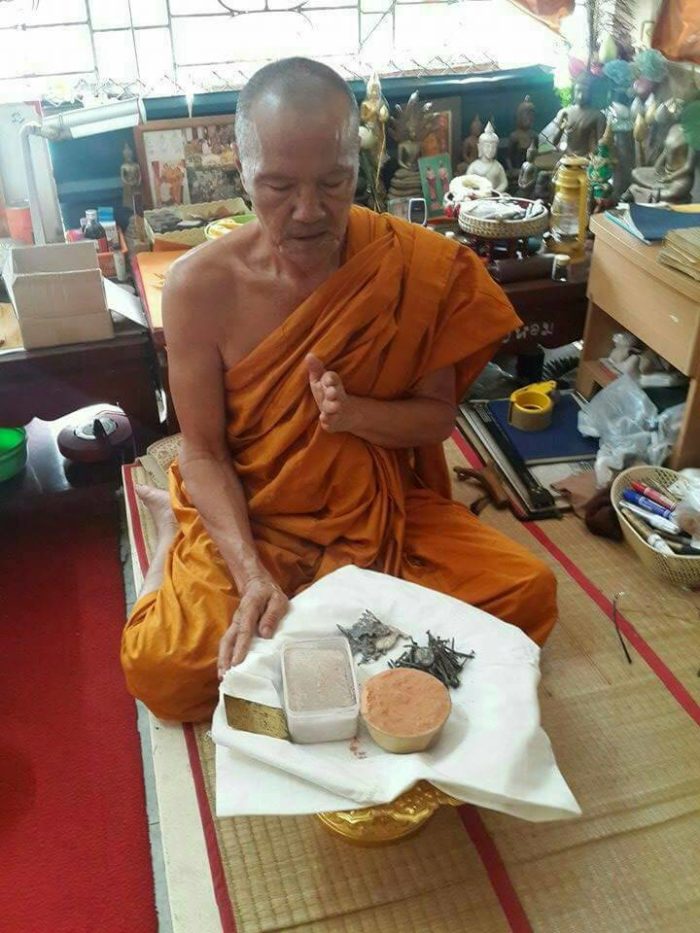 Classic Amulets of High sacred Value with a Long Lifetime of ever increasing rarity and esteem. As time passes, they will enter the annals of great editions along with all the other amulets of the Tamniab Pra Niyom Say Chonburi. 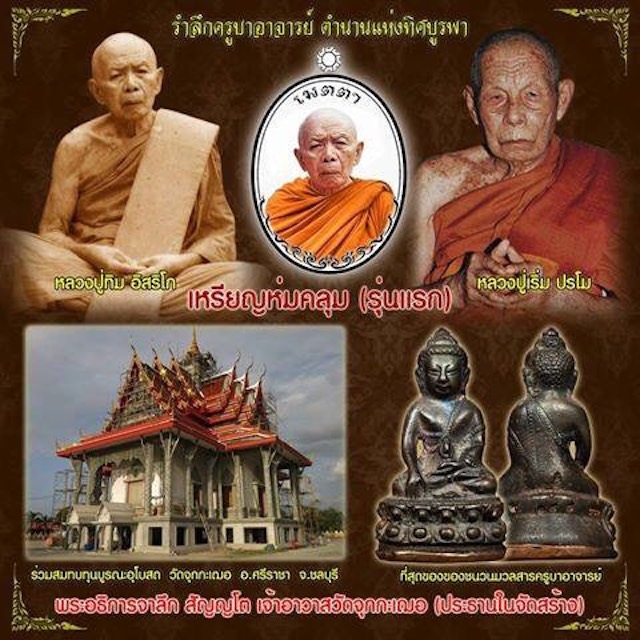