Ajarn Kom, also known as ‘Ajahn Nikom’, was the most Adept and famous Master in Supannburi Province during the 1990s, and one of the top Ten Lay Masters in Thailand. His Traditional Artisan style of making authentic charms and amulets, Bucha statues etc, is both a trademark of his individuality in remaining true to the tradition of making the amulets with his own hands.
Ajarn Kom was born in the year of the tiger on Tuesday, the 5/27/2505 (1962) at 09:00 in Ban Bang Kung, Supannburi. He is a Master Magician of great Humility and does not like to brag, or live a life of luxury. 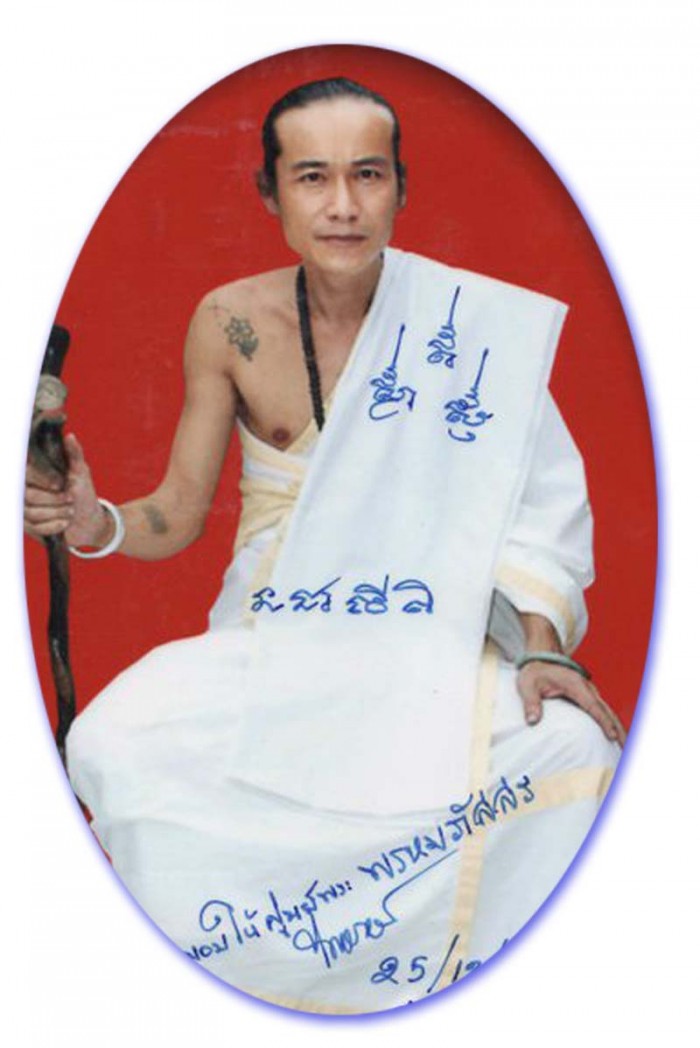 His Samnak is very simple, and has remained the same for many years without luxurious improvements. Most of his fundraisers from amulets just go to helping Buddhist temples to build their projects. His quiet manner and humble attitude has led him to become even more respected, for he is indeed perhaps the most powerful Master in Supannburi Province, and one of the most powerful Lay Masters in Thailand

He began practicing Saiyasart (Occult magick) at the age of 17, beginning his studies under his Uncle, who was also a Looksit of the Great Magic Monk ‘Luang Phu Sukh’ of Wat Pak Klong Makham Tao. After 2 years of practice, he ordained as a Buddhist Monk (Bhikkhu). He studied and practice onwards with Luang Por Sa-Ngaa (famous for herbal medicines and amulets)

He then traveled on Tudong (solitary forest wandering), in order to strengthen his arts and practice. On his travels he met Ajarn Khiaw who was a very adept monk and magician, and learned with him. He then met a Ruesi who initiated him into the ways and mysteries of Ruesi-Ism, and also learned with

After leaving the Sangha and becoming a Layperson again, he began studying and practicing the Various Wicha for protecting against the various dangers of his environment, and began to make Sak Yant tattoos, and Sacred Yantra designs using the Kampir Yant (ancient grimoire) of Kroo ba Srivichai.

Arjan Kom is widely known for his Kumarn Tong amulets and Buchas, which gained immense popularity and demand after many success cases with people who got one. Ajarn Kom has completed the correct studies and practices which need to be mastered to perform the correct invocation of a Kuman Tong Deity, which is why his Kumarn Tong and other effigies are considered so powerful.

Ajarn Kom became very famous in the late nineties and early post 2000 A.D. Era for his many different Kuman Tong amulets and Bucha statues, Takrut and Jorakhae Akom Crocodile Charms, but has in recent years kept himself to himself a lot more than in earlier times, and produces less editions, which has caused his amulets to become immensely rare to encounter in the present day.