Tan Khemago Bhikkhu (Luang Phu Kasem, or, Luang Por Kasem, Khemago), is an extremely revered monk of the Lanna tradition who the is considered one of the greatest Ajarn of modern Thai history, and has a massive and devoted following in the North of Thailand (and indeed all over the country). His devotees believe that to pay reverence to him or wear his amulets, results in receiving protection and safety wherever they go. His amazing dedication to his practice and purity is common knowledge with Thai people, which is easy to see since the very beginning of his path as he gave up the title of abbot of the temple and went to practice Vipassana Kammathana forest tradition methods residing in an old cemetery in the forest on a mountain side, which is where he remained practicing in humility and simplicity to the end of his mortal days.

Luang Por Kasem passed his Patipataa (Meditation and Dhamma practice), alone in solitude which is a cause of his being able to attain entrance to the points of Samadhi and subsequent Jhana access, controlling his bodily instincts and those of his psyche (psychological make-up and related aspects of his being). He attained an extremely high level of ability in the psychic regions and was able to empower amulets with massive power. His amulets (including Monk Coins with his image) have been the source of many a tale of miracle events, and are extremely sought after and revered by Thai people of the Central, Northeastern and especially the Northern areas. It is a known fact that he was not even attached to his food, and that it was seen that the food he was offered as alms often simply went putrid and was not eaten.
He only ate to keep his body alive, but never for pleasure or mental need. Luang Por would always receive any offerings in his Badtr (alms bowl) and then ‘Phae Metta’ (send Metta offerings back) to the people. Tan Luang Por Kasem Khemago was a good Bhikkhu with Pure heart and Sila (Moral Precepts/Virtue), and was full of Dhamma, living the Dhamma as it arose, stood fast and then faded away in the sequence of Tilakkhana as expounded to be the nature of all things (Anicca – Impermanence, Dhukkha – Unsatisfactoriness, and Anatta – Non-Self).

It is said that Luang Por has done away with all his Kilesas, and is full of the Baramee (Ten Perfections), and is to this day the source of well being and confidence of those who revere him, wear his amulets, and follow his teachings, and example of a good practitioner of the Dhamma, and a good Savaka (disciple) of the Lord Buddha 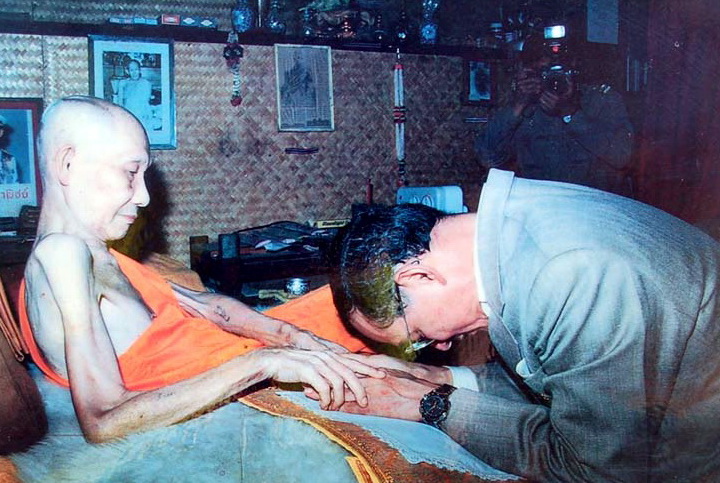 Above Pic; His Majesty and Royal Highness, King Bhumipol Adulyadej, greets Luang Por Kasem Khemago with reverence, and obvious intimacy. A picture tells more than a thousand words, it is said.

Kata for spreading Metta to Other Living Beings

Kata for apologizing to books

Luang por Kasem was a great lover of books, and would restore or clean any ripped pages or discarded pieces of book.

Kata for paying reverence to books

Books are the source of knowledge, and are thus sacred.

Amulets in the store by LP Kasem