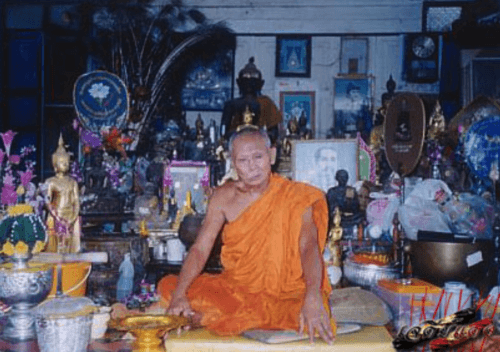 Luang Por Jamlong is in the lineage of LP Uea (Wat Panom Yong) LP Nor (Wat Klang Ta Ruea) and LP Phan (Wat Paed Ah)
Luang Por Jamlong is famous for testing out the magic of his own amulets, and is famous for saying “I dont write ‘Rong Na’ with an R, i write it with an L as it should be (Long Na) – many masters spell this way and it is tantamount to a useless amulet – I make the inscriptions myself, not the Looksit, and if i made it myself, then i should test them myself too, which i do”. 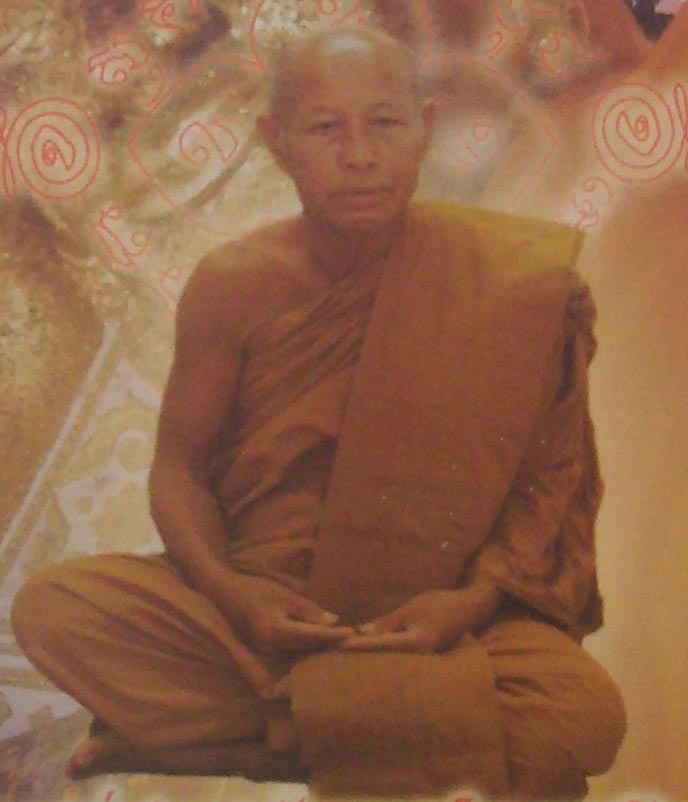 Before Luang Por ordained as a Bhikkhu, he was a traveling theater performer, and knew the songs of Choo Chok by heart (many songs of Lige Thai Theater are from Vedic psalms to the Deities, and have magical power). He would use this magic to get the audiences in, to the dismay of his competitors. After some years, he became bored with the illusions of Theater, and went to study real magic with Luang Por Uea at Wat Panom Yong. He later continued his study and practice with Luang Por Phan at Wat Paed Ah. He learned the Wicha of Pook Pha Khord and Wicha Pha Bin Kra Bon Yan.He tested the spell the first time by using a Civara robe as the cloth and throwing it in the fire, but the fire did not burn the cloth at all.

Once, as Luang Phu Tim of Wat Prakhaw was still a well man and visited Wat Khao Panom, he was asked by the local devotees at the temple if he had some ‘Khong Dee’ (literally; ‘Good Things’, meaning sacred amulets that have special magical qualities). But Luang Phu Tim retorted “It seems you have been missing many ‘Khong Dee’ before your own noses! – Luang Por Jamlong here at Wat Panom Yong, he has powerful wicha and powerful amulets. Why don’t you ever ask him for any? – Luang Pors amulets are just as good as mine you know?”

Luang Por Jao Khun Sawad (Wat Sala Poon) has praised Luang Por Jamlong saying that he has very strong magic and Metta power which he condenses into the amulets in a very concentrated density, and even says that Luang Por Jamlong is stronger than he himself was in is young days as far as Wicha Akom is concerned.

Anyone who travels between Ang Tong province and Ayuttaya, will probably have seen Luang Por Jao Noi Bucha statue.In olden days, as they were building a road thrugh the area, the local Folk rumored that there were many malefic ghosts and demons in the area, and indeed, it was true that there were constant accidents and deaths in the area. Luang Por Jamlong was who went to the statue and offered Bucha, speaking with the Deity. Shortly after, the accidents and unexplainable deaths reduced incredibly, and it is still a traditional practice to offer a split watermelon with salt sprinkled over it to Luang Por Jao Noi in thanks.

Whenever Luang Por has a moment when his magical powers are highly strung, he will immediately reach for his Tagrud making instruments and inscribe sacred Yant, roll them, wrap cords and roll in powder and lacquer with gold leaf and bless them.

Luang Por Jamlong is known for having made a special Tagrud amulet and hung it around the neck of one of the temple dogs which he looked after. The local Folk call it ‘The Dog-neck Tagrud of Ayuttaya’. The dog is a normal Thai street dog that can be seen in many Sois and alleys of Thailands cities. The dog got into a fight with a very large pedigree dog of Foreign origin (probably a Rottweiler or Alsatian), but the dog with Luang POrs Tagrud did not even have one scratch or wound at all, and the pedigree dog had to run for its life with its tail between its legs.

One day, as devotees thronged to the temple to make offerings to the Sangha, but no matter how opften they tried, it was not possible to light the incense or candles in the shrine. Then someone looked under the floor, and saw the the dog with the Tagrud around its neck was there eating.

They chased the dog out and tried again. This time the incenses lit easily, but the there was a wailing sound coming from the dog the whole time.

Some local kids once were very naughty and took a Thai style BB gun to try to shoot at the dog with, but it appears that the gun would not go off however they tried.

Luang Por Jamlong makes many famous amulets, one of the most well known being the small but amazingly powerful ‘Tagrud Dork Mai Sawan’ (heavenly flower Tagrud), which has brought stories of great luck and fortunes from those who have revered and worn it. His Choo Chok amulets are immensely successful for his years of experience in Choo Chok magical chanting.