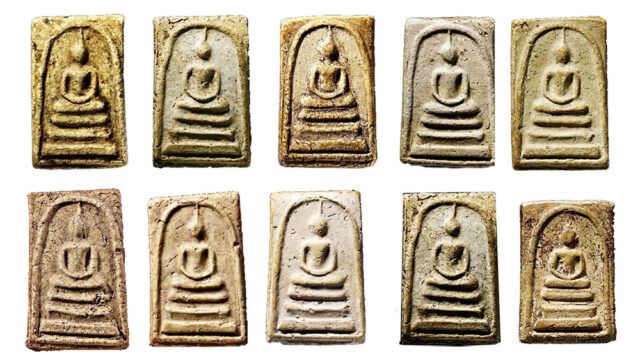 The Pra Somdej Wat Rakang amulet is the Keystone and Master amulet (Ongk Kroo) for all other Pra Somdej amulets. It is an image in the likeness of the Buddha sitting on a Dais, which was essentially created by Somdej Pra Puttajarn (Dto) Prohmrangsri, of Wat Rakang Kositaram. There are various different ‘Pim’ (models) with varying design features. 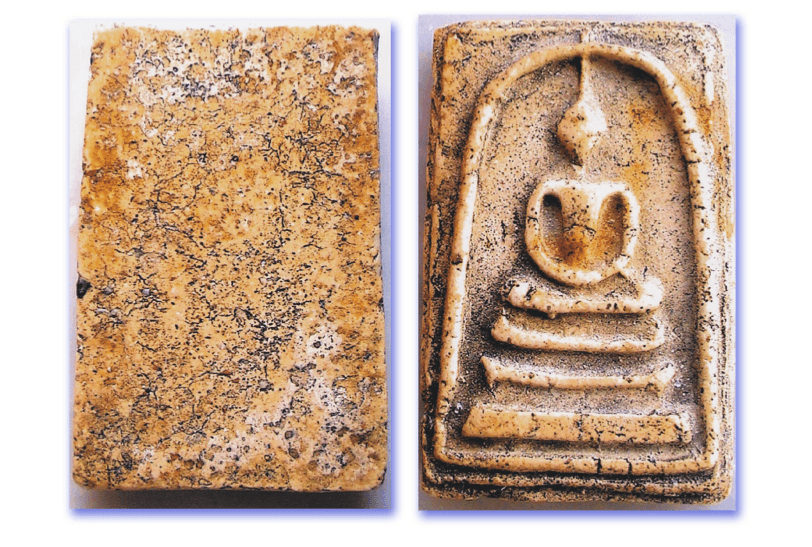 Its general appearance is that of an oblong about 2.5 cm wide and 4 cm high, made from white sacred powders mixed together.

The main Ingredients of the amulets (Muan Sarn Samkan) were made from a base of sea shells, dried rice left from alms round, the five sacred magic powders of Somdej Dto, and ‘Nam Man Dtang Iw’ (special oil for mixing). Nam Man Dtang Iw, or Tung Oil in English, is a preferred oil for mixing and curing amulets with, for it is superior to any other oil as far as water resistance is concerned (one reason why Pra Somdej amulets can be soaked in water without going soft). The oil is much more resistant to mold than its derivatives, such as linseed oil.

The Dtamra must be made by creating exactly 84,000 amulets, equal to the number of Suttas of the Tripitaka.

The Pra Somdej Pim Pra Pratan is the most popular of all the five Pim. The five accepted and preferred Pim are called ‘Pim Niyom’. 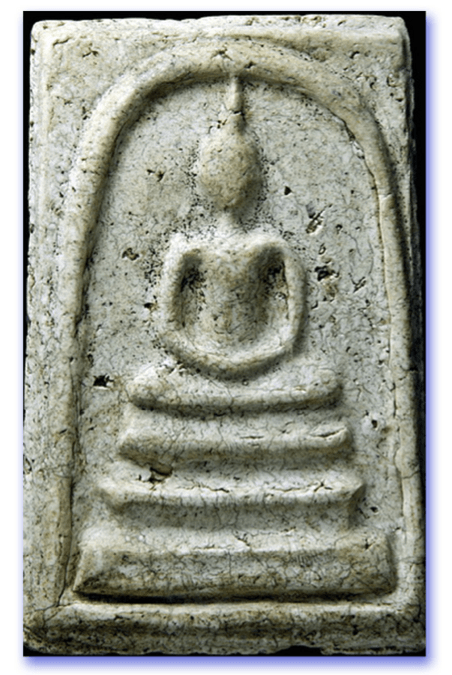 The Pra Somdej Pim Pra Pratan is a Pim that has varied surface textures, ranging from rough to silky smooth, rich in tung oil, (called ‘Gae Nam Man’) or ‘Gae Sangkhaya’, or ‘Gae Poon’. The image is anabstract embodiment of Lord Buddha, with the outer arch representing an upturned bell (the temple of Wat Rakang means ‘Temple of the Bell’). The Buddha images leans slightly to the right, and the tip of the crown leans slightly to the left (of the Budhha, our right if we are looking at the amulet). Some editions see the tip of the crown of Lord Buddha pierce the rim of the arch. The left ear is slightly faded in comparison to the right ear. The left shoulder is slightly higher than the right one, and in many examples, the armpit is more deeply carved. The bottom step of the dais is very square edged. 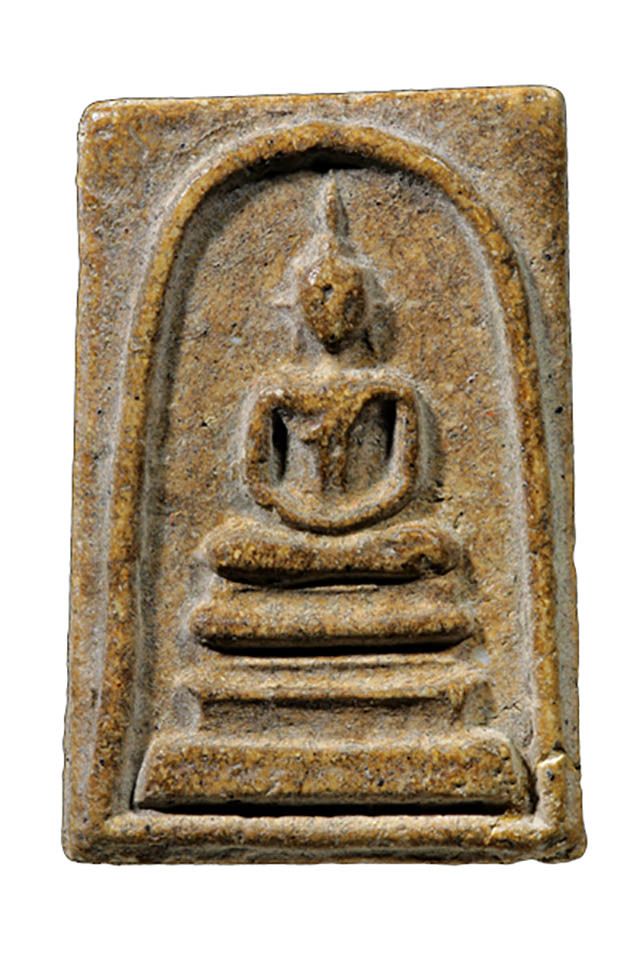 The Pim Gaes Bua Dtoom is the Pim of Pra Somdej Wat Rakang that is the rarest of all the five Pim to find. This Pim is of a Buddha sitting inside an upturned bell, with a very rounded face. The hair is wound to look like a ‘Bua Dtoom’ (a closed lotus flower – this is where the amulet gets its name too). 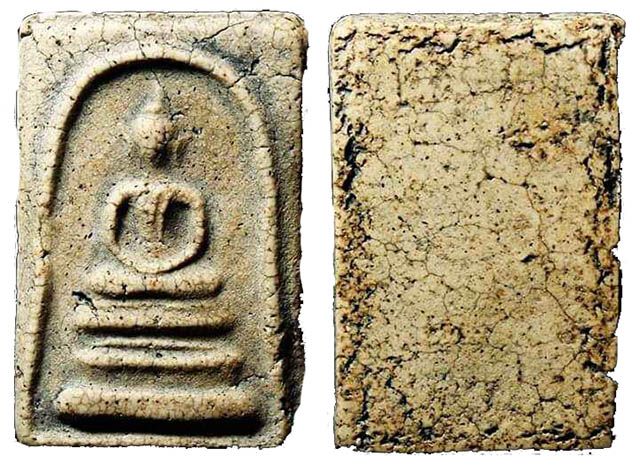 In contrast with all of the other four Pim Song, the Pra Somdej Gaes Bua Dtoom does not have a crown which pierces the arch, rather is much lower. two thin lines are seen between the second and third tier of the dais. You can see the lines of the monks vest (Sangkati) very clearly. This particular amulet has more Nam Man Dtang Iw (Tung Oil) than the other Pim Song, and is thus a little more yellow in tone, rather like the Gaes Chaiyo amulets. The Pra Somdej Wat Rakang is found in many tones and with various surface textures, and it is often said that ‘no two Pra Somdej look the same’, which is indeed an astute statement. 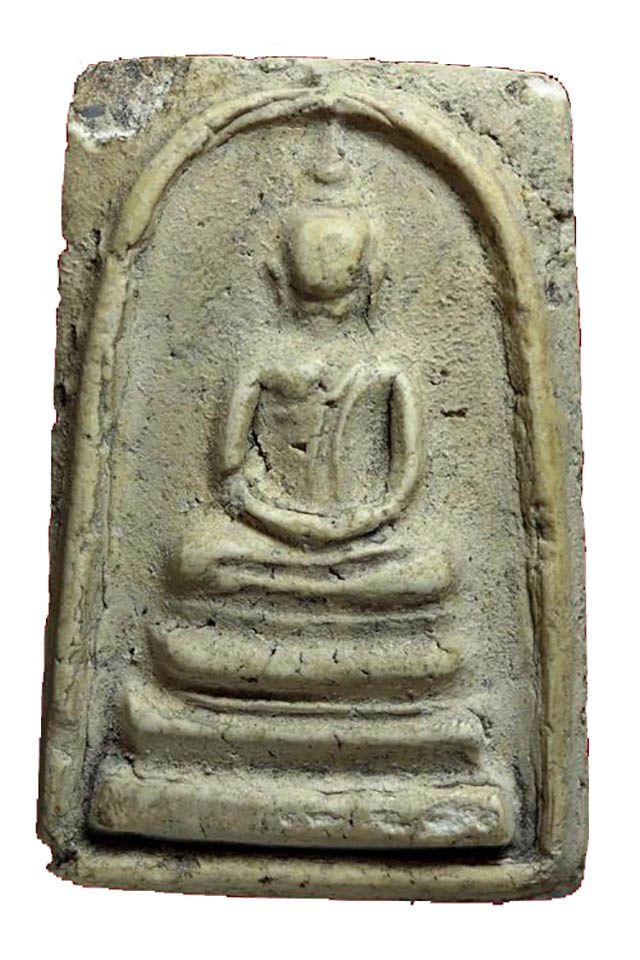 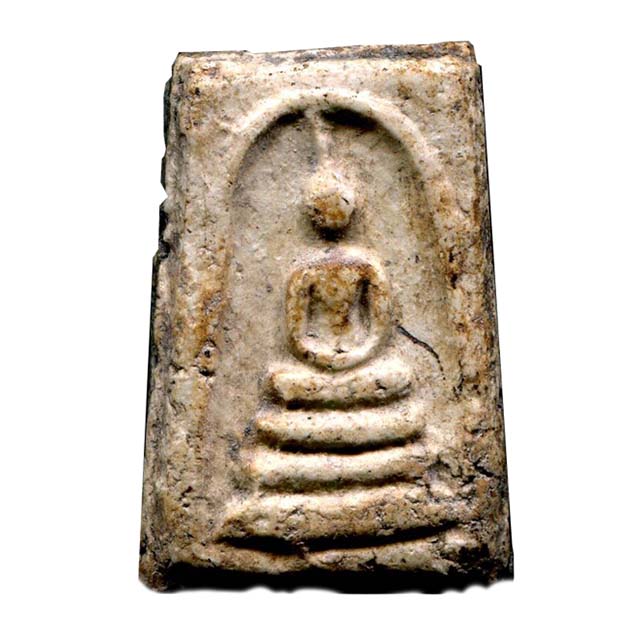 The above exhibit is a first early era model and looks much more hand molded, less oblong rectangular, and more tapered (wide at bottom and thinner at top), differing from the 2nd and 3rd eras, which were designed more finely, with a Buddha in an upturned bell, that is perfectly straight and symmetrical. All eras of this model, have a tapered shape like a Chedi Stupa. One can tell the difference between a Pim Yai and a Pim Chedi by using a ruler, and following the line of the angled 3 tiered dais. If the ruler is placed upon the line of the raised dais, and meets directly in the middle of the arch at the top of amulet, where the Buddha’s topknot touches the arch, then it is a Pim Chedi. If the rule lands slightly to either side of thecenter of the top of arch, then it is not a Pim Chedi. The body of the Buddha on the Pim Chedi amulet is usually slightly fatter than those of any other Pim Song. Various models are found depending on which Era and block press mold, hence, many differences are to be found (as is the case with all Pra Somdej Wat Rakang Kositaram Somdej Dto), from the different eras and block press molds, some preferred, some less preferred, depending on beauty, rarity, and level of acceptedness in upper-class amulet societies. 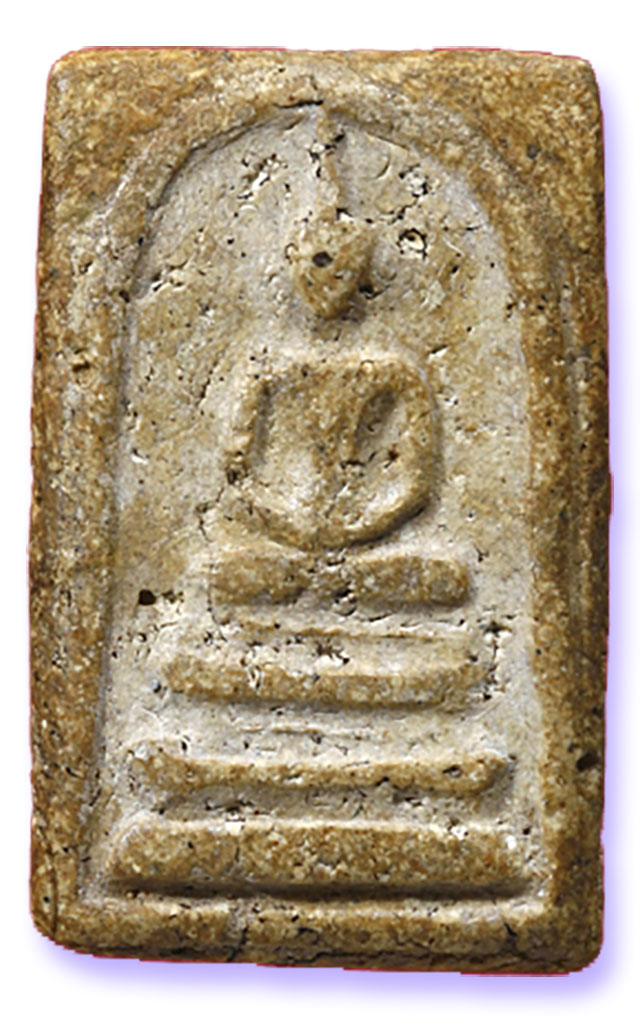 Pim Thaan Saem is in the likeness of a sitting Buddha in an upturned bell, with ‘Hoo Bai Sri’ (pointy triangular ears). There is a small ledge placed between the seat of the Buddha and the top step of the dais it is sitting on, and one thin ledge below the top step and the one below it on the dais. 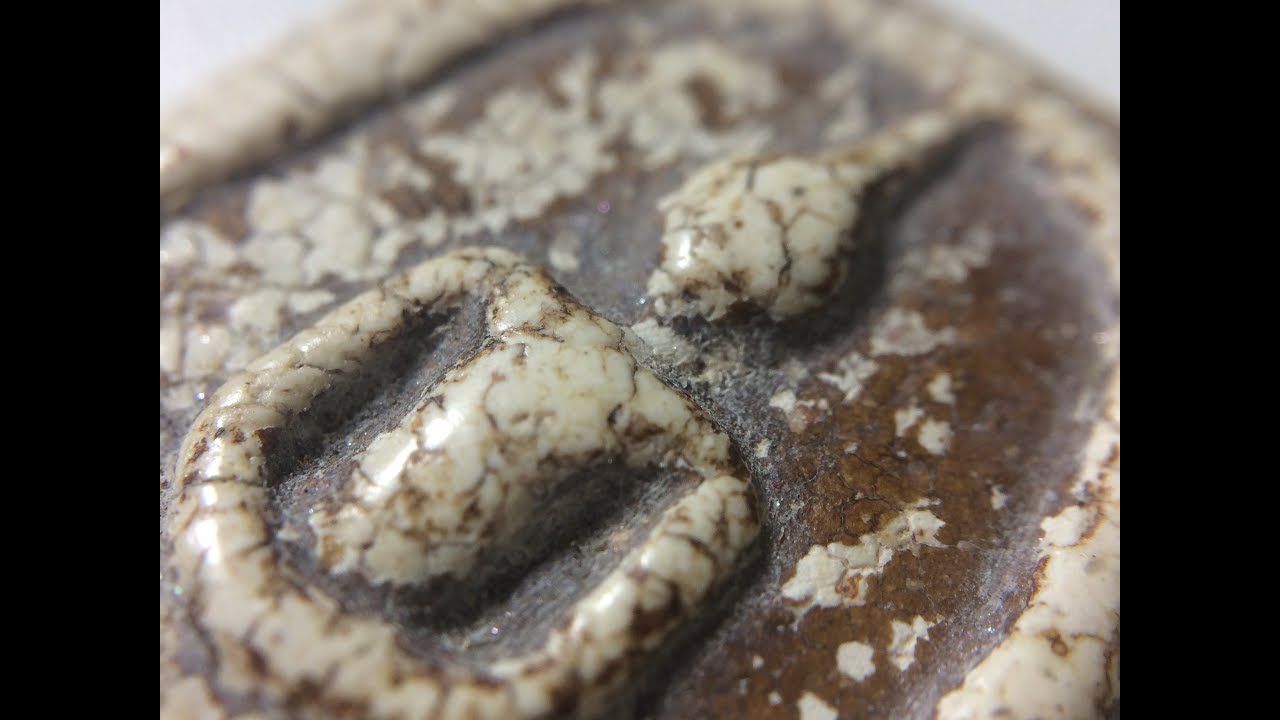 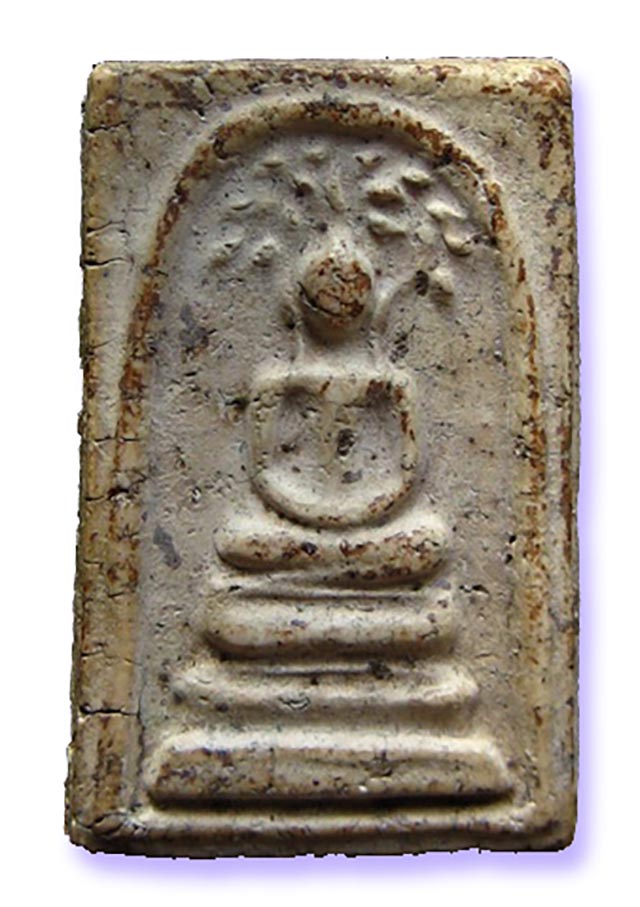 Pra Somdej Pim Brok Po is in the likeness of a sitting Buddha in an upturned bell, and looks similar to the Thaan Saem Pim, exept that it has falling Bodhi leaves over the head of the Buddha. Pra Somdej Wat Rakang Kositaram Pim Prok Po Pim Niyom Ongk Kroo – This is a classic Pim Niyom, but, one must also reveal, that many variations of this block press are found to be in existence, for example, some with Sangkati sash visible, and some without. Some exhibits have Thaan Saem interceding lines between the layers of the dais, and others not. In truth, apart from the various block presses made by the royal artisans Chang Luang Wijarn, Luang Wijit, and Luang Sittigarn, many local artisans helped to make block press molds, resulting in a multitude of ‘Pim Plaek’ models which are rare and differ from the classic block press structures. 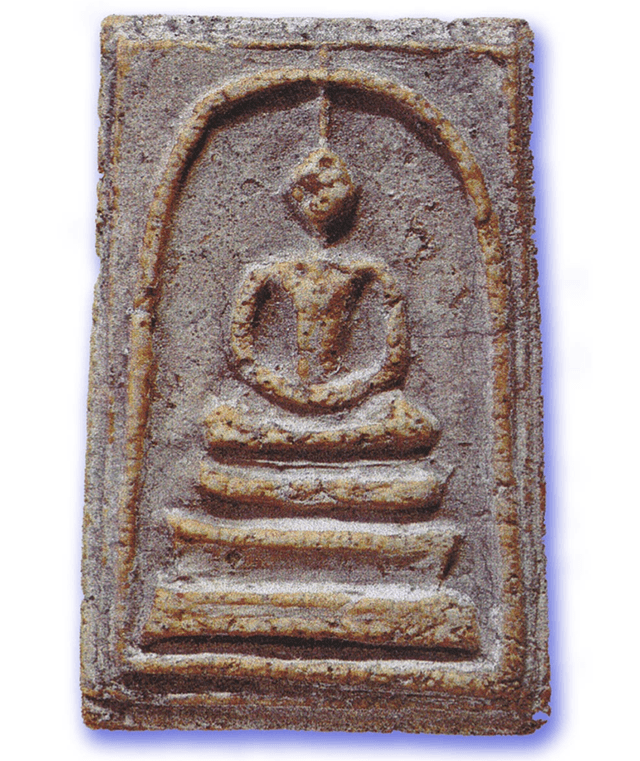 Pra Somdej Wat Rakang Kositaram Pim Gaes Talu Sum is Similar to the Pra Somdej Pim Pra Pratan, but has the ‘Pra Gaes’ Topknot piercing the arch at the top of the amulet. 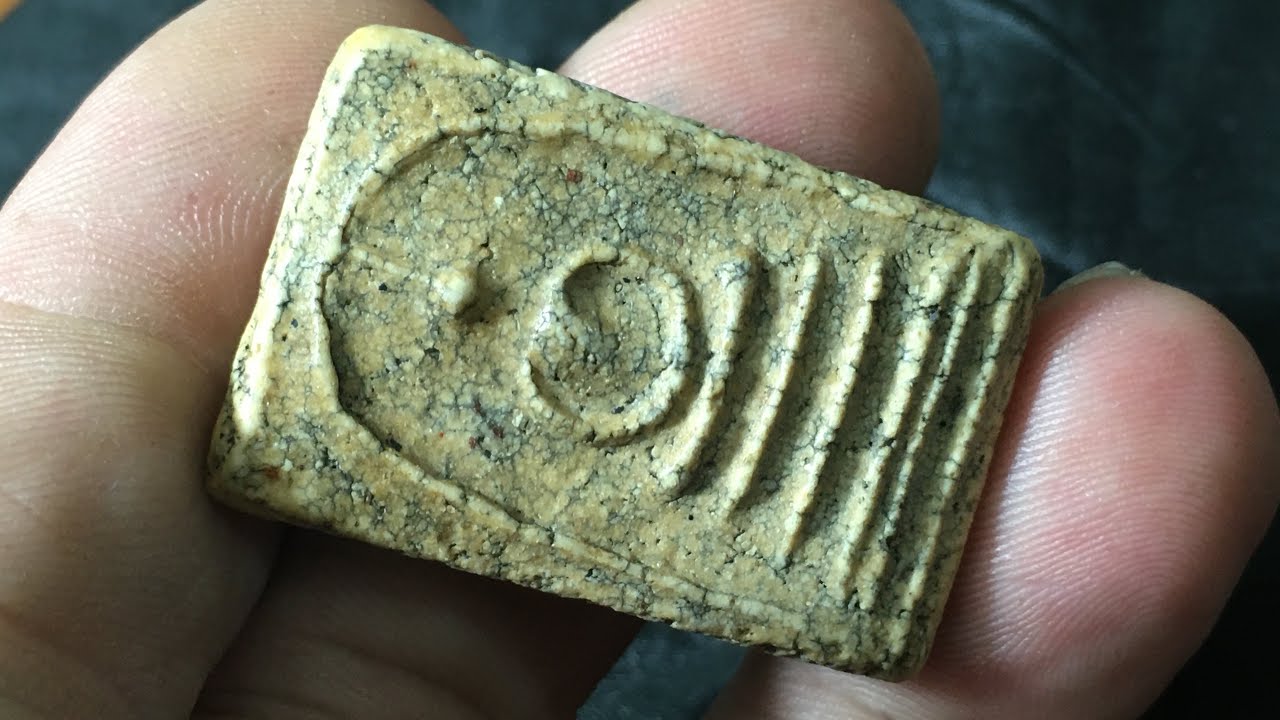 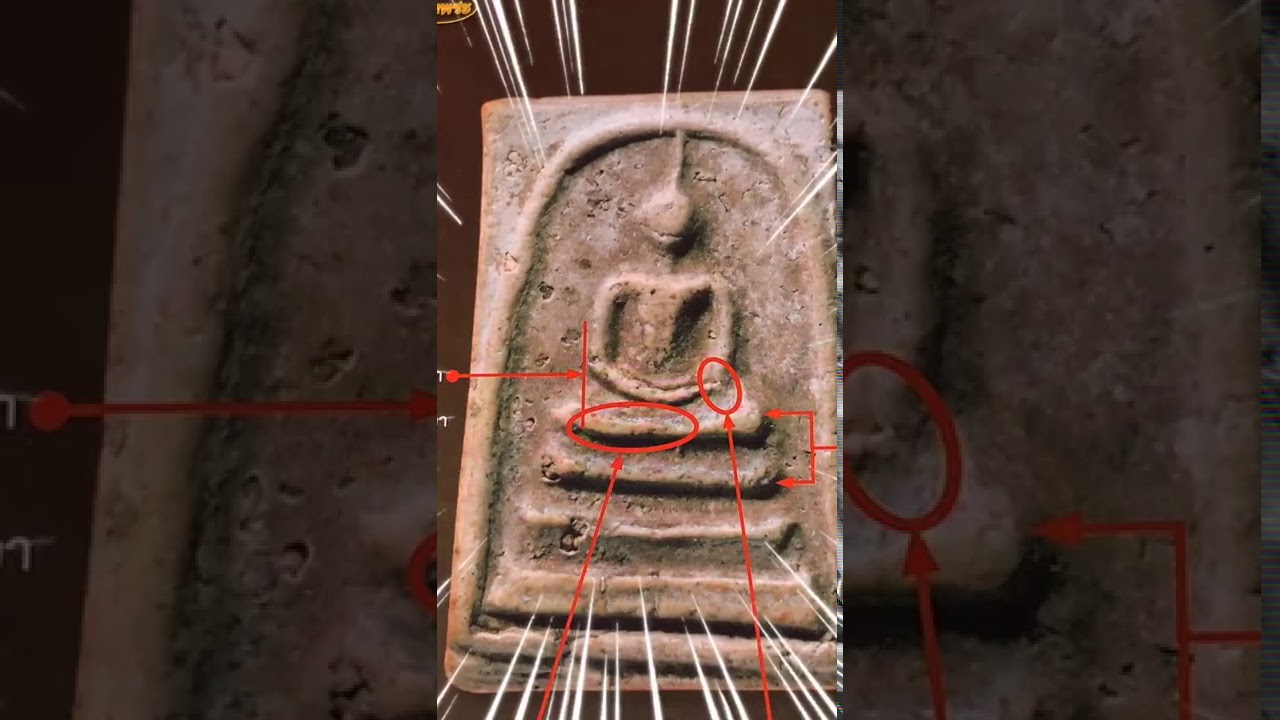