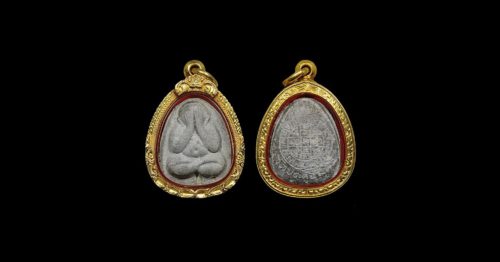 Pra Pid Ta amulets, as well as Pra Pid Ta in form of Pha Yant, and Bucha statues, have been produced as objects of reverence and protection since very ancient times in Thailand. The artisans of that time created various styles and interpretations using the various periodic influences of Buddhist art and sculpture available at the time. Varios Deity forms were used to make the Pid ta posture (‘Pid Ta’ means ‘covering the eyes’) – various Buddhas or Bodhisattvas or Deities are fashioned into the posture of Pra Pid ta, or Pid Tawarn (meaning ‘closing the orifices). Pid Tawarn can close 7, or 9 orifices (seven being called ‘Pra Pid Sadtatawarn’ and nine being called ‘Pra Pid Navatawarn’). 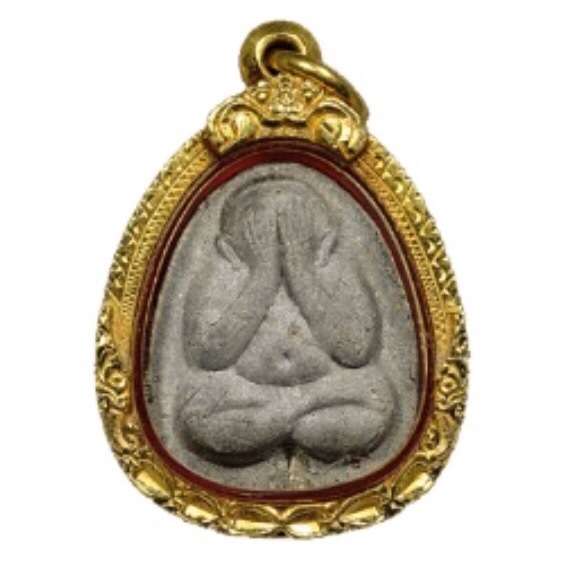 The Pra Pid Ta is considered to be an amulet with ‘Maha Ud’ and ‘Kong Grapan’ power (invincibility and gunstopping power), but is also made as a wealth bringer, in which case, the amulet will be called ‘Pra Pid ta Maha Lap’. In order to inflect a greater resonance for wealth attraction and auspicious blessings, in addition to the Maha Ud and Kong Grapan magic, ancient artisans sometimes would use the image of the Sangkajjaiyana Buddha of riches and happiness, and carve it in the Pid Ta posture.

The Pra Pid Ta Silapa Mueang Nakorn amulet is an artistic interpretation found often in ‘Gru’ hiding places in the South of Thailand. They have been found in many different materials, including bronze, and copper sacred alloys.These Southern Nakorn Sri Tammarat period syled amulets have a much more attractive and special look to them compared to those from other regions in that time. 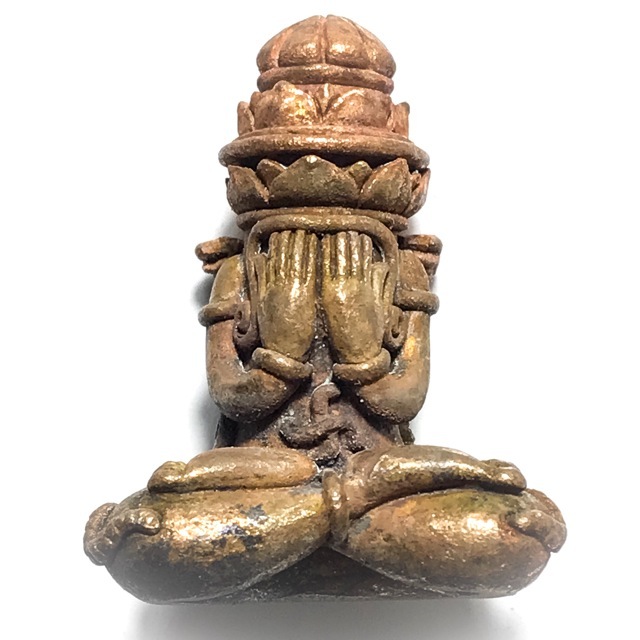 The Pra Pid Ta Pang Pagan Amulet is a Dtamnan (tradition and legend) of amulet making that dates as far back as 1900 to 2000 Years as far as is currently know from archeological finds in Thailand to date.

The Pra Pid Ta amulet has its Origins in the time of the Srivichai Kingdom; There was a Great Person born with the name ‘Taw Pang Pagarn’, who defended the Kingdom from Invasion, and brought it back to his Ruler. For his good leadership and Victory, he was awarded Lordship and rule over the City of Nakorn Sri Tammarat, ranging from the Sacred Chedi (Pra Boroma Taat Chedi), to the mountainside. The local Folk gathered in throngs and cgave honor to him raising him to Deva status by calling out the title; ‘Taw Pang Pagan’. The Srivichai Kingdom was returned to Thai rule, after a very long invasion from the Chawa. Shortly after this, the Northern warlords and Barons of Siam joined with the Sukhothai Kingdom, which then superseded the Srivichai Kingdom as the Ruling center of the Siamese Regions.

The following generations after the Era of Taw Pang Pagan were ever more initiated into Buddhism as the Dhamma travelled from Sri Langka to Siam, and they began to make Pid Ta amulets in what we now call the Pim Pang Pagan, in honor of Taw Pang Pagan and his family lineage. They personalized this particular Pim with the addition of a Cobra, as a mark of recognition, so that future Generations will remember the courage and heroism of the warriors of the Srivichai Kingdom who played an essential part in how Thailand exists today.