Pra Sangkajjai represents one of the Pra Sidtisawok Aedtakka (One of the Buddha’s the most admired and praised practitioners). The Buddha praised him for his ability to put long complex teachings into short understandable formulas. 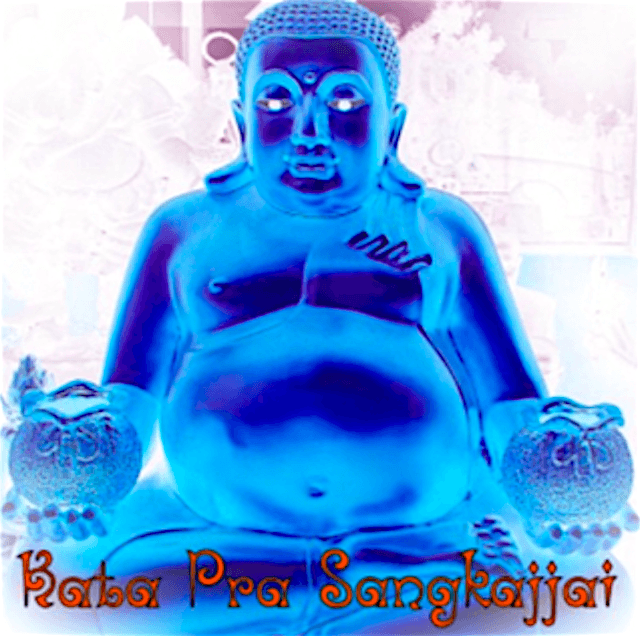 He has a golden tinted skin complexion, and was originally so similar in appearance and stature to the Lord Buddha, that sometimes people would mistake him for the Buddha if seen from a distance. For this reason, he used his mind powers to force his body to grow fatter and not so handsome as before, in order to not confuse others if he was the Buddha or not. The ancient masters would often use the visual symbolism of Pra Sangkajjai’s features to create statues in this image, which has served as an important preserver of the Faith over the Centuries, and a very old form of Buddha image dating back to the early times of Buddhism.

Pra Maha Sangkajjai was originally called ‘Ganjana’, which means ‘Gold’ in Pali. He was the son of a Brahman called Bpurohidtgajjayana Kodtra in the City of Usenni

He studied and completed the Traiwaet (Tri Veda). After his father passed away, he inherited the title of Bpurohidt (advisor to the King). This happened in the time of the King Jantabajjodti

Pra Sangkajjai had 7 close companions who cam,e with himn to attend the Buddhas teachings at Wat Weluwanaram, and after listening to the Dhamma, becamse Arahants instantly and asked to ordain. In the Turasutra it is mentioned that Pra Sangkajjai lived to the age of 120 years old.

Pra Sangkajjai Amulets.
The making of amulets in the image of Pra Sangkajjai have been made since ancient times by many different Temples and Samnak

The Sangkajjai amulet has always been a very preferred amulet and believed ot have great power, for the insertion of the ‘Puttakun’ qualities of the Sangkajjai Buddha of Metta Mahaniyom and Maha Sanaeh and forcing these powers to become a Sacred Na spell within the image of the amulet. Sangkajjai amulets are also sometimes made as Pid Ta amulet posture too, as a mix of wealth increase, and protection from harm amulet..

The Na Sangkajjai Spell can be made as a Takrut and inserted into the image of the Sangkajjai Buddha, which awakens the Metta Mahaniyom power within, The amulet can be worn, placed on an altar for Bucha, or even kept in your money purse.

This Kata calls luck and fortune and brings wealth, and other great treasures.

Chanting this Kata is Good for increasing popularity, business sales and promoted status.
In addition, Sangkajjai amulets have the special abstract magical quality of increasing your common sense, mindfulness and wisdom is also present within this amulet. This particular aspect of the Sangkajjai magic is what is called a ‘Prisnatam’ (mysterious phenomenon).

There is sometimes a little confusion between these two Buddhas, because some artistic interpretations of Maitreya (called ‘Pra Sri Arya Maedtrai’ in Thai) depict this Buddha as a plump sitting buddha with Bald head. This causes people to think it is the Sangkajjai Buddha. The way to tell the difference is that the Sangkajjai Buddha will have curly balls on his head (representing the curly hairs), and the plump image of Maitreya has a shaved head.

Origins of the name Sangkajjai
Pra Sangkajjai was not called this from the beginning, but came from Thailand, when in the Radtanakosin Era, whilsst digging to place the central pillar of a temple shrineroom that was being built for a temple in Tonburi, and they found a Gajjaiyana Buddha and a Conch shell (Conches are called ‘Sangkh’ in Thai). This temple was then called afterwards ‘Wat Sangkh Grajay’ (temple of scattered conch). It is assumed then, that the namke of this amulet came from the name of the temple, and that a double word play or ‘Chinese Whispers’ style distortion of the name occured and Gave the Ganjana Buddha the name of the temple it was found in.