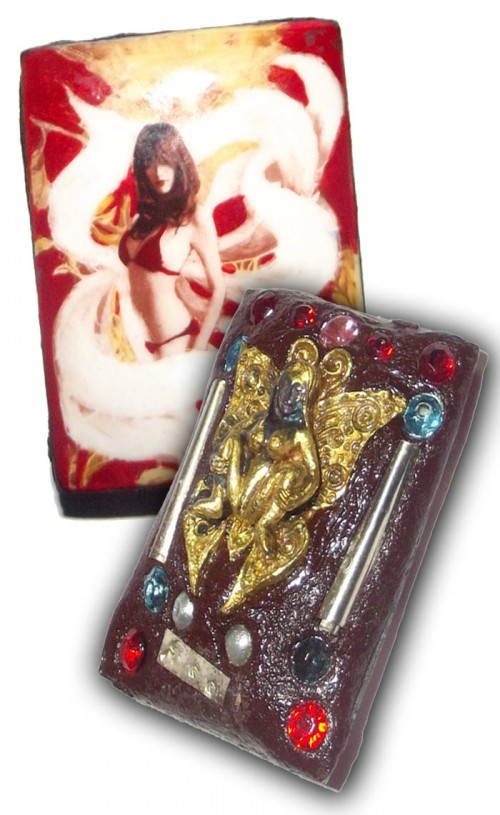 The Nine Tailed Fox is a Legendary Demoness, known in Indian, Koran, Chinese, Thai and Japanese Spiritual Cosmology, legend and Myths. The nine-tailed fox (Chinese and Japanese: 九尾狐; pinyin: Jiǔwěihú; Korean: 구미호) is a mythological creature species that was depicted in the Nanshan jing, Haiwaidong jing and Dahuangdong jing of Shan Hai Jing as having the voice of a human infant. It can be eaten by humans, and those who eat it can be protected from evil. Later in history books like Book of Zhou and story collections like Extensive Records of the Taiping Era, the nine-tailed fox was depicted as a beast of fortune.

Sent by the heavens, the nine-tailed fox was seen as a sign of fortune, peace and luck. In the Han dynasty, it is the protector of royal blood. The Nine Tailed Fox is able to enter and possess others, and is able to change its shape and form, a Master of Illusion. Its ability to attract the other sex and seduce them into the bed has gained Legendary status in all Cultures where stories of its existence have arisen.

Use the same methods used for Hun Payont, Nang Prai Devas and other Prai Ghosts, you can find this on the Archive  Page of Kata Chants for Thai Buddhist Amulets.

The Amulet and the Wicha

The 9 Tails Fox Demoness Legend is Ancient, but the Wicha as far as a Thai Buddhist Amulet, is relatively New. This does not mean however that it is not Valid. All Wicha were created by Masters, and this Wicha is in Principle the Same as all other Wicha which Involve a Ruling Deva (Prai) that dwells within the amulet. The Mind of a Lersi or Guru Yogi or Master Monk that is able to travel the celestial realms can communicate and make agreements with the Devas who they are able to Perceive, and it is as easy to develop a communication line with the Nine Tailed Fox, as it is with the Mae Takian or the Kumarn Tong. This does not mean it is easy, rather, it is only possible for Great Masters of Meditation to achieve, but once achieved, can develop a large array of possible Prai Spirits to become Ruling Devas of an amulet, through simple travel and communication in the Astral and Celestial Realms, how high, depends on each Master. How High or Powerful a Deva or Ghost Spirit a Master can Convince is also dependent on each Master. The Nine Tails Fox would require a very Powerful Mind to be able to resist the demonic Enchantress in the sealing of the Agreement to dwell within the Lockets. In the moment, there are about Ten Masters Currently practicing and Developing both this Wicha and the forms of Amulet with which to represent the Deva in its Physical Form. Lockets and Powder Amulets are in the Moment the Most Popular model for the 9 Tails Fox, with Lockets taking the lead, due to the assistance of artistically qualified devotees of various Masters assisting in the creation of the front face image for the shell face of the locket.

The Nine Tails Fox is an Impeccable Defense against Black Magic with her Hian prai Psychic Powers and here Willingness to make Displays of her Powers. This is One reason why this Prai Deva is considered so effective, because she is so ‘Hian’ (in Psychic Fury), that she will need little coaxing to teach a lesson to anyone who sends any evil eye magic, curses or Spirit assistants to Harm You.

Ajarn Spencer spends a lot or most of his free time making these tutorials and other info to support customers and Devotees of Buddhism, if you would like to donate for his time, please use this Donation button; [donate count=2 type=default]