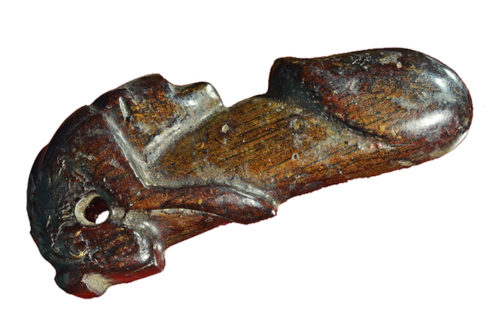 The Thai Palad Khik an Animistic Phallic amulet, carved in the form of a Male sexual organ. Palad Khik are made in all sizes, ranging from miniature ones the size of your little finger, right up to ones which are higher than a human. Palad Khik are extremely popular with Thai people, worn as amulets tied to a cord around their waist.

The belief in the Shiva Lingam, or ‘Leungk’ (Thai pronunciation) phallic energy of the Palad Khik, is derived from the Brahman influence which has been inflected on Thai Theravada Buddhism, since both belief systems came to Siam more than one or two thousand years ago. It is believed that the Palad Khik Lingam energy is the source of all life forms in the Universe. This is the root of the act of reverence (Bucha/Poojah) to the  Palad Khik as a Shiva Lingam, which honors Shiva as the Lord of the World. 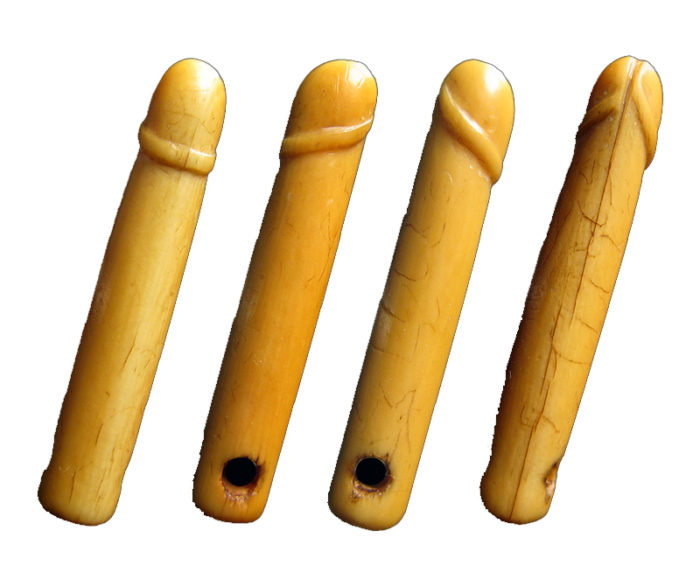 In India, not only is the Shiva Lingam worshiped, bit there exists also a cult which reveres the female sex organ, which is called the ‘Yoni’ (Vulva, female counterpart). The same thought is applied as that used too revere the  Palad Khik Shiva Lingam, that is to say, that all created things must spring out of the Yoni instead of the Lingam. 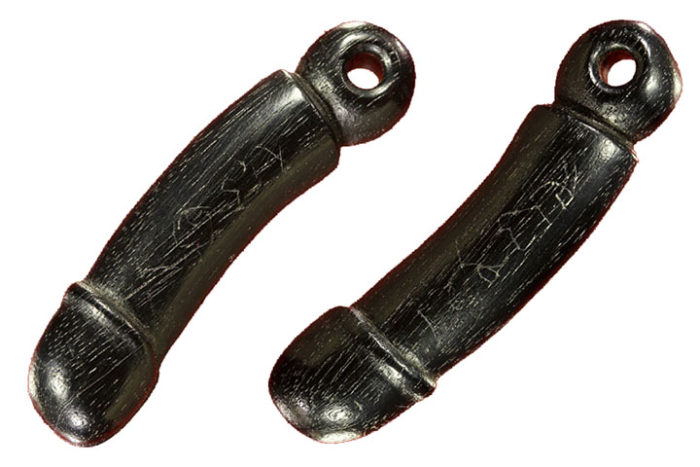 The practice of making Palad Khik as a portable amulet, for ‘Bucha Siwalingk’ (praying to Shiva Lingam phallic Deity), entered Siam with the influence of the Khom race, whose language and alphabet the Thais absorbed and adapted into their own personalised fashion. Some have said that the integration of Pre-Buddhist beliefs and traditions, into the Thai Theravada Buddhist practice of the common Folk, such as worshiping amulets like the Palad Khik, is not in contradiction to the practice of Buddhism and presents no obstacles.

In fact it is believed that since Buddhism sprang out of the roots of Brahman Cosmology, and that the people of Siam adopted Pre-Buddhist Brahman traditions and incorporated them, that this is even a benefit to the preservation of ancient knowledge, and of Thai history and tradition. Most of these ceremonies do not come into any kind of dispute with Buddhist thought. In fact, Buddhist Thought bases itself on many concepts found in Hinduism, and in Thailand, the two Beleif Systems can hardly be separated. 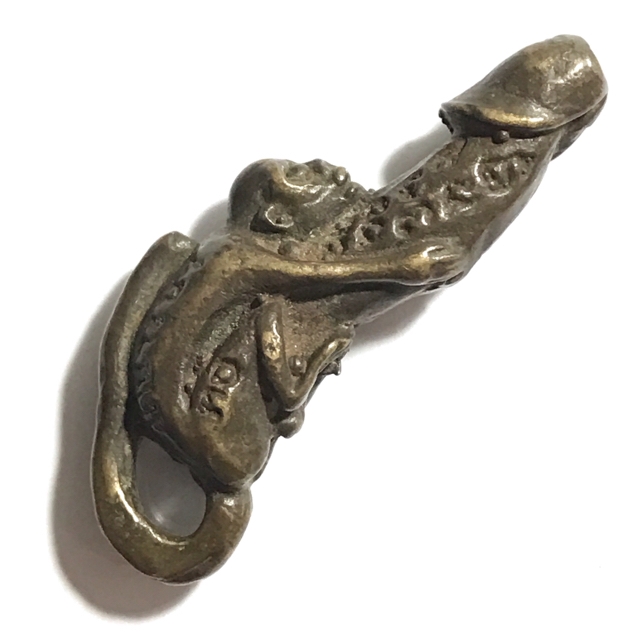 The word ‘Palad’, means ‘vice’ (as in ‘vice President, vice Mayor, etc). This has caused the Palad Khik to make some people t exclaim jokingly “why don’t you call it ‘Vice Mayor Khig’?. In fact, the word ‘Palad’ is derived from the Sanskrit ‘Bprasawa’, which translates as “he who stands by the side of’. This was adapted into the Thai language as Sanskrit and Buddhism entered and flourished in Siam. This is why in Thailand, an assistant to the Mayor (Nay Ampher), is called ‘Palad Ampher’. But the real reason this word (Palad) is used for the Shiva Lingam amulet, is that it is worn as a companion to remain by the side of the wearer (‘he who stands by the side of’). Devotees of the Palad Khik tend to wear it outside of their clothes, around the neck, waist or sometimes hanging inside the trousers, against their loins. The word Palad Khik (“ปลัดขิก” -low sound) was originally pronounced ‘Palad Kik’ (“ปลัดคิก” – rising sound) in ancient times. 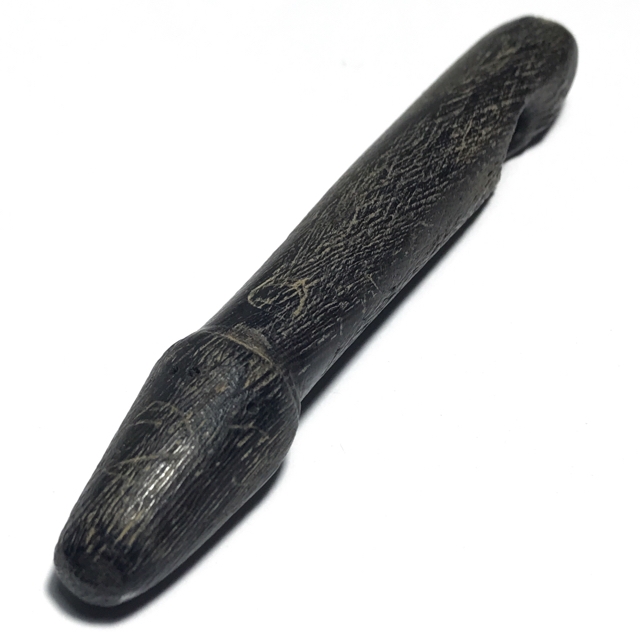 Above; Palad Khik Mai Gae Luang Por Ee Wat Sattaheeb Ancient Carved Lingam – am exhibit of this age and from a master monk of this caliber can carry very high prices indeed.

Many ancient Thai masters and amulet makers were inclined to making Palad Khik amulets, which were extremely popular with the Folk. Some had Khom Agkhara lettering, such as ‘U A Ma’ or ‘Om’, which are psalms to Brahma, Shiva and Vishnu. Some Ajarn would inscribe Sanskrit Agkhara instead, in Brahman tradition.

Even though today’s age of technology has brought many things to distract us from magic, the Palad Khik is still an extremely widespread belief and is worn by Thai people in all provinces. Hang around any Samnak sak or Samnak Ruesi for a while and you will most definitely see someone wearing a Palad Khik amulet. These days, The Palad Khik seems to have become extremely specialized and is made by various Ajarn, both ordained and lay masters. Each master makes a different Palad Khik with different purposes and uses. Be it good business, love affairs, or protections from evil, there seems to be a Palad Khik for every need.

In the Isan country, Palad Khik is sometimes also called ‘Bak Ben’, or ‘Khun Phet’. Palad Khik has been used by Isan people to ward off dark magic, for example in a case about 2548, the Folk of Roi Et were afraid of ‘Phii Mae Hmaay’ ( a female ghost who hunts men), so they erected a massive totem pole in the shape of a penis, with the initials (S and Y) of the man they believed to be the target of the ghost. They placed the giant Palad Khik in front of the mans house. 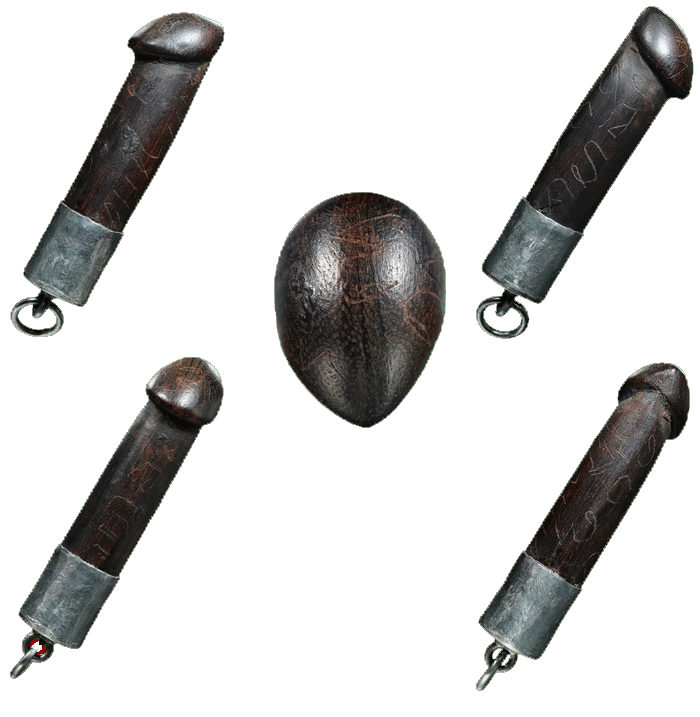 Over the years, many rumours and legends of Palad Khik performing miracles of Kong Grapan Klaew Klaad magic and other protective spells, the popularity and demand for such talismanic charms increased, to the point where locals would flock to the various Gaeji Ajarn around the country who made these amulets. The Palad Khik was here to stay. 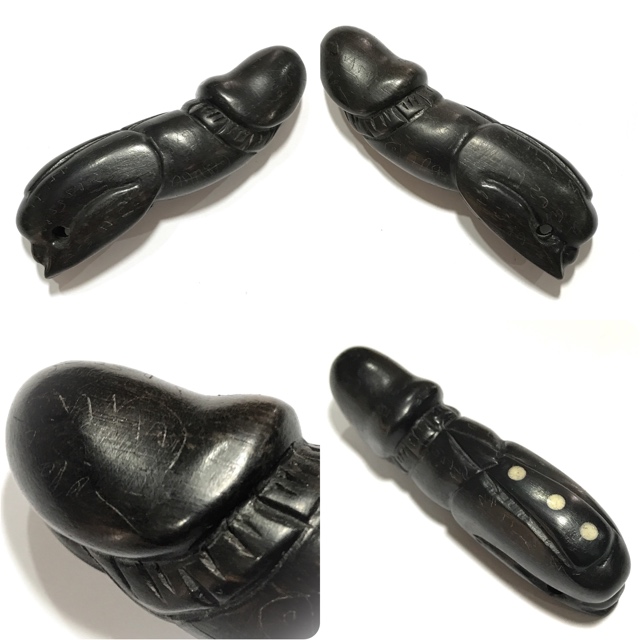 When the Gaeji Ajarn would make Palad Khik, they would have learned and researched the correct creation methods and ritual process to empower the amulets, in addition choosing auspicious and magical kinds of trees for the wood used to carve them out of. They would then inscribe sacred Khom Agkhara and make incantations of Kata to increase the magical charge and the strength of faith the devotee would have in such an amulet. 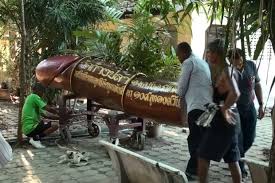 The Palad Khik began to be used as a portable amulet through being carved from wood which was from the Cassiafistula Linn variety of tree, which has medicinal or healing properties. Ancient Folk would then use this when traveling cross country; If they had to drink water from a stream, or other natural source which may have bacteria or dangerous amoebas, they would take the Palad Khik and use it to stir the water before drinking it, to remove any danger of illness. Palad Khik is not only applied for preventing dangers and illness, but is seen to possess all other kinds of magical properties, such as Metta Mahaniyom (preference and popularity, friendliness and love, compassion,receiving generosity and mercy), Choke Laap (luck and fortune), good salesmanship, Love charm, and the like.